The DOCSIS CPE landscape is about to change

The market for DOCSIS modem and gateways, long dominated by CommScope/Arris and Technicolor, appears to be in the midst of a tectonic shift as a group of original device manufacturers (ODMs) ramp up product certifications at CableLabs.

Obtaining the CableLabs stamp of approval ensures that a cable modem or gateway is interoperable with DOCSIS networks while also clearing such products for potential retail sale. But securing certification is also widely viewed as a required step before cable operators themselves would be willing to purchase such products directly from a supplier.

Recent product certifications by a wave of consumer premises equipment (CPE) suppliers endowed with their own manufacturing capabilities is a clear sign that they are ready to swoop into the market and sell DOCSIS CPE directly to cable operators. That puts them in position to encroach on turf long held by original equipment manufacturers (OEMs) – such as CommScope/Arris and Technicolor – that typically play a key management role between the cable operator and the companies that actually manufacture the final product. If these ODMs are successful in going direct to the cable operator, they could essentially leapfrog the OEMs.

"The whole landscape is changing," says a veteran of the DOCSIS CPE industry.

This transition in the DOCSIS CPE market "is well underway, there's no question," Jeff Heynen, senior research director, broadband access and home networking at Dell'Oro Group, said. He points out that this change has already reached the DSL market and is also underway with PON gear amid ongoing trade issues involving Chinese suppliers such as ZTE and Huawei. 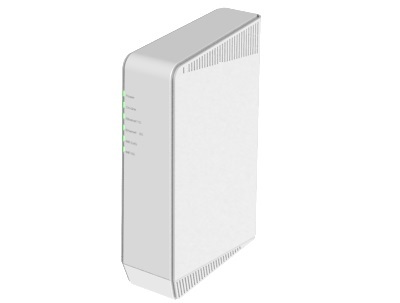 This DOCSIS 3.1/Wi-Fi data gateway in one of several products in Sercomm's expanding DOCSIS CPE portfolio.

Likewise, the shift to more residential broadband usage during the pandemic and the need for operators to expand their CPE sourcing have "opened the door even wider for these ODM providers," Heynen said.

A move by ODMs to step up and challenge the status quo of the DOCSIS CPE sector also stems from the fact that the software component of those modems and gateways has largely been extracted from the hardware, eliminating an important product differentiator among modem and gateway OEMs.

That trend is partially embodied in the Reference Design Kit (RDK), a pre-integrated software stack for gateways and set-tops managed by Comcast, Liberty Global and Charter Communications (a position inherited from Charter's acquisition of Time Warner Cable). Charter, meanwhile, has been quietly focused on what it calls the Spectrum Connectivity Platform (SCP).

ODMs flexing their muscles at CableLabs
Evidence of this shift in the DOCSIS CPE market is hiding out in the open as various ODMs have achieved CableLabs product certifications in recent months. The ODMs that secured the CableLabs stamp for DOCSIS 3.1 CPE in recent test waves include Arcadyan Technology Corp., Compal Broadband Networks, Humax, Sercomm and Sagemcom. Hitron and Ubee Interactive, veteran DOCSIS CPE suppliers with in-house manufacturing assets, also have secured recent product certifications at CableLabs.

To prepare for their pivot into the direct-to-cable operator sales market, these insurgent ODM suppliers have also been gaining OEM expertise in recent years. A prime example is Sercomm, which hired former Arris exec Derek Elder as president of Sercomm Technology (Sercomm's US subsidiary) more than two years ago.

Arcadyan is another supplier that is likely a source of concern for incumbent DOCSIS CPE suppliers as the Taiwan-based company gears up to compete for business with cable operators that might be seeking a hedge against the likes of CommScope and Technicolor. Arcadyan, whose parent company is Compal, has almost no footprint in cable CPE and no DOCSIS wins yet announced, but has had plenty of success in the telco market with carriers such as Verizon (for its Fios gateways) as well as Telus and Deutsche Telekom.

Arcadyan, which is believed to be aligning its cable product roadmap with silicon from Broadcom, "is probably my biggest competitor across the business," an exec with a CPE supplier said. "They are a pretty scary competitor."

Potential cost and speed advantages
Because they have their own manufacturing capabilities, ODMs could help cable operators lower overall CPE costs. But the risk to MSOs is twhether these ODMs will be able to step up and handle the management role typically held by OEMs to ensure that the final product fulfills the vision of the cable operator.

Cost savings is but one side benefit. The primary benefit could be product velocity, as some suppliers tell Light Reading that ODMs should be able to develop a new product in about half the time that an OEM can.

Thanks to its direct ties into manufacturing, an ODM "can go immediately to prototype" and make rapid changes and prove out a new product design, an exec with ties into the cable CPE market said. "It's all about speed."

Although ODMs are getting more aggressive about doing direct deals with large cable operators, it's difficult to gauge precisely when they will make a deep dent in the DOCSIS CPE market because it can typically take two to three years for a tier 1 operator to go through the process of vendor selection and testing.

But that overall process is said to be well downstream, setting up insurgent suppliers to snag between 20% to 25% of the share in 2021, and rise up further in 2022, estimates an industry exec familiar with the trend.

Heynen still expects CommScope/Arris and Technicolor to remain important players even as ODMs start to elbow their way in. "Plenty of major operators will rely on them as supply chain managers and systems integrators, so they can focus on bigger things," he said.

The idea that a supplier with tight ties to manufacturing could make a play for the hearts and minds (and pocketbooks) of MSOs isn't entirely new to the cable industry. Several years ago, iNovo, a startup led by former Scientific-Atlanta and Cisco execs that has since flamed out, tried to undercut incumbent cable CPE suppliers by forging direct ties to manufacturers that aimed to reduce costs and accelerate product development for cable operator partners.