LAS VEGAS -- CES 2019 -- As major US mobile rivals clashed this week about what is real and fake 5G, top cable execs here insisted that the technology that will underpin cable's move toward symmetrical 10-Gig networks isn't vaporware, but something that's real and poised for widespread deployment in the coming years. (See AT&T's Donovan Defends the Carrier's 5G Fibs and Verizon, AT&T Spar Over 5G Service Names, Marketing.)

"This will work," Tony Werner, president of Comcast Cable's Technology, Product, Xperience group, said here Wednesday at a panel at The Four Seasons hotel dedicated to the cable industry's newly branded "10G" initiative and titled: "The Future of the Broadband Network." (See NCTA Trademarks '10G' and Cable to Tout '10G' at CES.)

Werner acknowledged that there's still much work to do over the next year or two as silicon and the broader product ecosystem evolves, but said demos of the technology -- based on the new emerging Full Duplex DOCSIS 3.1 specs originating from CableLabs -- are already being proven out in the labs with several key suppliers and ready for the next phase. (See CableLabs Pushes Full Duplex Forward.) 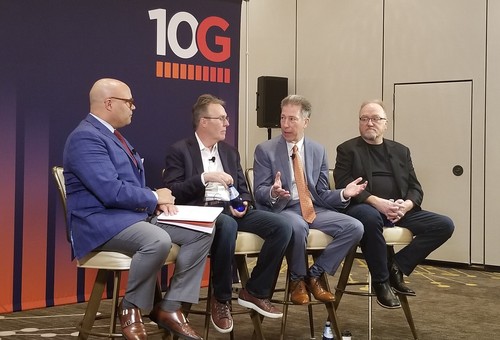 "Nothing new has to be invented," said Phil McKinney, CEO of CableLabs . "The technical risk is near zero to get from 1-Gig to 10-Gig" on cable's widely deployed HFC networks.

Execs here said chipmakers, network infrastructure vendors and customer premises equipment suppliers are putting their weight behind cable's 10G initiative that, in addition to more capacity, is also being designed to tack on more network security and deliver lower latencies due to the move to a more distributed network architecture.

"Intel is all-in," Werner said. "They are going to be a great partner" for 10G. He also referenced several other players that will be involved, including MaxLinear Corp. , Broadcom Corp. (Nasdaq: BRCM), Nokia Corp. (NYSE: NOK), and Arris Group Inc. (Nasdaq: ARRS). "We have a nice ecosystem coming," Werner said.

Werner said 10G "is pretty much a breakthrough" and represents "the biggest leap that we've taken," as earlier versions of DOCSIS technology improved cable performance on a relatively smaller, incremental scale.

10G vs. 5G
Michael Powell, the president and CEO of the NCTA  The Internet & Television Association , teased the industry's use of the "10G" at last fall's Society of Cable Telecommunications Engineers (SCTE) Cable-Tec Expo in Atlanta, and referred to today as "the next great leap in broadband." (See Cable Leaders Hammer 5G 'Hype'.)

And he held that the use of the 10G moniker is not just in response to the hype and attention being lavished on 5G wireless.

"And, no, folks, we didn't pick the name just because it's twice as much 'G' as '5G,'" he said. "We chose it because it succinctly declared our concerted drive to deliver 10-gigabit speeds to consumers in the United States and around the world."

"This is not a battle about 5G and 10-Gig," said Pat Esser, president of Cox Communications Inc. , citing the expected backhaul role cable networks will play in 5G networks. "Actually, if you're trying to roll out a wireless 5G network  you need us deploying a 10-Gig network." He said about 82% of the cell towers in Cox's markets are already connected to the operator's network.

And execs here said cable is underselling itself a bit with 10G -- so long as the "G" is a reference for "gigabits." Using advanced modulation and 1.2GHz of spectrum, the capacity unleashed is closer to 14 Gbit/s.

But 14G "didn't have the same ring," Werner joked. "If you look at what we're saying with 10G, we aren't being hyperbolic at all ... it's a very rational number. It's not a BS number by any means."

What will be 10G's killer app?
Panelists also talked about what apps and services will need 10-Gig speeds, and things like connected health services, education, business services and virtual reality came up. As did the notion of volumetric video and holographic images.

"I somewhat joke that the Star Trek holodeck is coming, but it's going to take a 10-Gig network to deliver it," Esser said, adding later that HFC "has a lot of juice left in it." (See Multi-Gig Brings Star Trek Holodeck to Cable.)

"The explosion we're seeing in video has no indication of slowing down," McKinney said.

Timing and next steps
As for timing, the industry expects the technology to be ready for early field trials in 2020. From there, it will move to device certifications, and then it will be up to operators to figure out their deployment roadmaps. "It's not far away," McKinney said.

Though Full Duplex DOCSIS, as originally envisioned, required a deep fiber, N+0 environment (no amplifiers between the home and the node), engineers are working on technologies -- including developments around a Full Duplex Amplifier, that can deliver similar capacity benefits in N+1 or N+2 scenarios. (See Full-Duplex DOCSIS Not One-Size-Fits-All and Arris CTO: What's next for DOCSIS?)

But Werner said N+0 has several other benefits, noting that Comcast has seen a 20% or more reduction in service calls on networks that support that architecture. "It pays back on a number of fronts and it sets us up [for 10G]," he said.

And though wired networks are central to cable's 10G initiative, WiFi, as it does for cable today, will also tie into the new technology. Werner was especially complimentary about WiFi 6/802.11ax. WiFi 6 will deliver more wireless capacity, but the "big win" will be the greater number of simultaneous connections it will provide in a congested environment, he said. "I think you're going to love WiFi6." (See Arris Gets a Fix on WiFi 6.)