BT's Patterson May Be Running Out of Time

With his flowing locks and square jaw, BT boss Gavin Patterson cuts a dashing figure in the grey-suited world of telecom. But he had lost some of his charm to BT shareholders and employees this morning. Shares in the formerly state-owned UK operator slid 9% in London trading after it forecast another decline in sales and earnings in the current fiscal year. About 13,000 jobs are to go. (See BT to Slash 8% of Jobs in Efficiency Drive.)

BT's problems of telecom market saturation and heavy-handed regulation are hardly unique to the UK. But they come on top of an accounting scandal at its Italian business and criticism that BT Group plc (NYSE: BT; London: BTA) has been slow to embrace change. "Many large telecom companies are struggling with digital transformation because of a hierarchical, slow and risk-averse organizational structure," said Mark Newman, a chief analyst with the TM Forum, an industry association, in a statement on BT's news. Today's strategy update may be a last-gasp attempt by Patterson to restore confidence. (See BT Rejigs Consumer Biz as Profits Hit by £225M Italy Payout.) 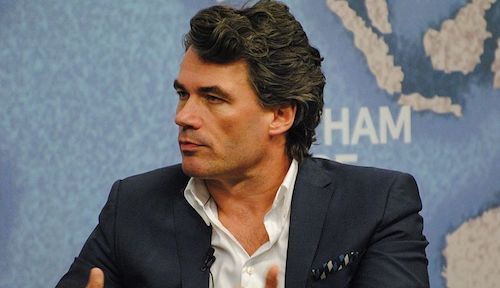 BT CEO Gavin Patterson could be in the firing line after today's strategy update and job cuts announcement triggered a 9% fall in the UK operator's share price.

The market's initial reaction is not encouraging. But given the headline performance and outlook, a fall in BT's share price is perhaps no surprise. With pressure in most parts of the business, BT's full-year sales were down 1%, to about £23.7 billion ($32.1 billion), and underlying earnings fell 2%, to around £7.5 billion ($10.2 billion), in the fiscal year ending in March. They will drop to around £7.3-7.4 billion ($9.9-10 billion) in the next one, BT expects, and revenues will shrink 2%. Dividends will not rise for the next two fiscal years. Some analysts think they should be cut.

Patterson must have hoped his upbeat chatter about transformation, convergence and 5G would buoy spirits. Yet there was little of concrete value in his presentation to really excite the market. Discussions with regulatory authorities about a much bigger all-fiber investment, bringing connectivity to around 10 million premises by 2025, appear to be moving in the right direction. But rival networks are now taking shape, and there is no guarantee customers will spend more on higher-speed services. (See BT Gets Boost After Ofcom Raises Broadband Price Cap.)

In the mobile area, too, BT faces a colossal investment in 5G despite evidence that next-generation mobile technologies are not drivers of sales growth. "We will look to have a commercial 5G product launched in the next 18 months," Patterson told analysts this morning. Asked about the rationale, Howard Watson, BT's technology chief, gave an underwhelming response. "We're confident the first application will be enhanced mobile broadband," he told analysts. "We've built the business case for 5G leadership on returns from that opportunity." (See OrbTV: BTs Watson on Applying Automation for 5G.)

Active only in the rapidly maturing UK market, BT's EE mobile and consumer businesses, which account for about 44% of total sales, can no longer rely on signing up new customers for revenue gains. Instead, BT wants to propel existing customers toward pricier services and bigger bundles. Here, there is perhaps cause for greater optimism. At the consumer business, average revenue per user was up 5%. The average number of "revenue-generating units" (operator code for products) per customer is still only about two. "That gives us confidence for further growth," said Simon Lowth, BT's CFO.

Together, BT consumer and EE delivered a 4% increase in revenues last fiscal year, to around £2.6 billion ($3.5 billion). But executives do not expect these rates of revenue growth to last. "Why do we need to evolve? Volume growth is slowing," said Patterson. "We need to put the customer at the center of everything we do and emphasize value over volume."

Yet aside from TV services, along with fixed and mobile connectivity, it is unclear what BT could add to its "convergence" offerings. France's Orange (NYSE: FTE) is making a bold push into the banking and energy sectors. BT does not appear to have similar ambitions. In the era of YouTube, there are signs that "linear" TV, including sports viewing, holds limited appeal for a younger audience. In the connected home, over-the-top services continue to undermine telco offerings outside the pure connectivity market. (See Orange Plans Bank Raid With AI, Digital Weapons.)

There is even greater anxiety about the business-to-business (B2B) side of BT. Collectively, revenues from the business and public sector, wholesale and ventures, global services and Openreach divisions were down 6% in the last fiscal year, to about £4.2 billion ($5.7 billion). The heavily regulated Openreach was the only unit to report stable revenues. During BT's earnings call, Goldman Sachs & Co. analyst Andrew Lee remarked that B2B access rivals have a low marginal cost to compete, and have been "eating incumbents' lunch on a daily basis." And IT services competition from the likes of Amazon Web Services Inc. is growing, he pointed out.

Sleeker animal
The message on job cuts is that a headcount reduction will deliver £1.5 billion ($2 billion) in annual cost savings, at an upfront cost of £800 million ($1.1 billion), making BT a leaner machine able to satisfy pension obligations, dividend payments and network investments. Cuts will affect 13,000 staff in back-office and mid-level management roles. Because BT is recruiting 6,000 workers for network and customer service roles, the net reduction is 7,000 positions. But the operator has cut only 2,800 of 4,000 jobs identified for termination under an earlier plan. That brings the total planned reduction to 8,200 jobs, and will leave BT with about 95,400 employees in the next few years, based on figures in its last annual report.

Expressions like "leaner," "digital" and "agile" are, of course, intended to convey a positive impression of a more fit-for-purpose operator. The harsh reality is that automation and other headcount-reducing measures represent the surest ways for BT and other telcos to bolster margins in today's zero- or low-growth reality. With fewer than 96,000 employees, and unchanged sales, BT would generate per-employee annual revenues of about £248,500 ($336,100), up from £226,500 ($306,000) in the fiscal year ending March 2017 -- an improvement of nearly a tenth that should help to protect the bottom line.

Nevertheless, it would still leave BT looking comparatively inefficient next to some of its peers. Germany's Deutsche Telekom AG (NYSE: DT) and Spain's Telefónica had per-employee revenues of 344,600 ($409,300) and 423,700 ($503,200) respectively last year. Even long-suffering Telecom Italia (TIM) beats the UK incumbent, with 333,200 ($395,700) in per-employee sales. And all of these operators are prioritizing automation, too. For the BT employees set to lose their jobs in the next three years, today's news may be devastating. For the wider economy, the real worry is just how far cuts might ultimately go. (See Efficiency Drive by Major Telcos Has Claimed 74K Jobs Since 2015.)

Infostack 5/10/2018 | 8:34:32 PM
Many will follow... The entire industry will be restructured in the next 10 years.  What few realize is that the mobile industry and fixed benefited from 0% to 100% penetration of their markets over the past 2 decades.  And in the last 10 years were pulled into 4G because of iOS and the app ecosystem; which directly benefited the fixed industry for the wifi offload as did Youtube and Netflix.  None of this demand side will change noticeably, but new business models will arise that can price 90% below the incumbents; fixed or mobile.  Cheers!
Reply | Post Message | MESSAGES LIST | START A BOARD

James_B_Crawshaw 5/10/2018 | 6:25:10 PM
Re: Gavin Echlin Patterson is a British marketer!!! LOL, this one line explains everything Now I like bashing marketing people as much as the next guy, but the fact is around 20% of FTSE 100 (top 100 UK-listed) companies have a background in sales and marketing, the second most common background after finance (36%).
https://www.marketingweek.com/2017/04/21/marketers-continue-to-take-ceo-roles/
In the consumer and tech sectors around 30% have a S&M background.

This study in the US suggests around a quarter of CEOs have a S&M background:
https://www.ama.org/publications/eNewsletters/Marketing-News-Weekly/Pages/quarter-ceos-have-marketing-sales-background.aspx

They're not going to put an engineer in charge of BT. Look what happened to Rolls Royce!

This guy has been a CEO since 2013 and after 5 years, this buggar has not figured out how to run a company. Fire this guy NOW BT. BT board looks to be spineless. If a CEO is giving turnaroud BS after 5 years, it shows how imcompetent he is. This happens if you appoint a Marketing person to be CEO of a Telecom company. Does this guy understand what does G stand for in 4G? He is talking about 5G. You cannot run a telecom company by simply doing marketing Gavin.
Reply | Post Message | MESSAGES LIST | START A BOARD
EDUCATIONAL RESOURCES
sponsor supplied content
White Paper: Build Accurate Traffic Matrices with Demand Deduction
White Paper: Learn Best Practices for Core Network Capacity Planning
Case Study: Automating Multivendor Networks to Improve Network Robustness and Reliability
Success Story: How Telefonica Improved Repair Time and Time to Market with Cisco NSO and Crosswork
White Paper: Capitalize on the Economic Benefits of Network Automation
White Paper: Automate Your Certification Process to Onboard in Hours, not Days
Research Study Results: Service Providers save 50-70% in costs with Automation and Orchestration
Simplify Your Network Cybersecurity Compliance Verification and Reporting with Cisco Crosswork Trust Insights
e-Book - Transforming Telecommunications with Intelligent Automation
Use Case: Sprint Automates 50 Business Processes within 6 Months
Educational Resources Archive
More Blogs from Morris Lore
A Cellnex mutation could upend European telecom