Ericsson CEO Börje Ekholm made a curious but telling comment when recently discussing his company's efforts to play a bigger role in China as operators prepare to invest in new 5G networks. "No awards have been made and we have no way of knowing potential market shares or price levels," he told analysts during a phone call about the Swedish vendor's financial results.

In any free market, share and prices would be determined by competitive tenders issued by the country's operators. It would be up to Ericsson to show off its technological prowess and prove it can meet a given operator's requirements. Weeks ahead of important awards, its boss would be able to draw some connection between Ericsson's capabilities and the likely tender outcome.

The system is very different in China, say experts. "You have to go to a test for your equipment that determines what price you get and your market share and the Chinese companies always perform much better," says John Strand, the CEO of Danish advisory firm Strand Consult. "The market share that Ericsson and Nokia get in China is not related to free market conditions."

Much like its poor track record on protecting intellectual property, China's rigged system is widely recognized but rarely acknowledged. Western vendors are understandably wary of criticizing Chinese authorities and provoking a backlash in the world's biggest mobile infrastructure market. Ekholm's confession of total ignorance at least tacitly recognized the unusual circumstances in China.

Other senior executives at Ericsson and Nokia, its big Finnish rival, have gone further. Several months ago, Kristian Pullola, Nokia's chief financial officer, warned of growing support for local vendors in China, long before the award of any 5G contracts. Fredrik Jejdling, the head of Ericsson's networks business, has acknowledged there are "geopolitical dimensions" that could influence the decisions taken by Chinese operators.

In few other countries open to all vendors is the market so lopsided. Ericsson puts its market share at around 10%. With Strand estimating the Nordic vendors together have less than 20%, Nokia's position is probably similar. That leaves the rest to Huawei and ZTE, China's homegrown options, as well as Nokia Shanghai Bell, a joint venture between Nokia and state-backed China Huaxin.

Circumstances are in marked contrast with those in Europe, where Huawei and ZTE have advanced quickly against European firms since the arrival of 4G technology. Data provided by Dell'Oro shows that Ericsson's share of the global market for radio access networks (RANs) tumbled from about 36% in 2012 to just 28% four years later, as Huawei picked up business. 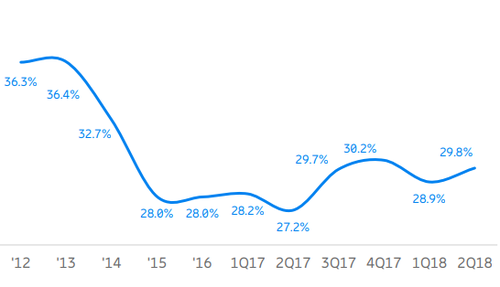 The China syndrome puts the Nordic vendors at a huge disadvantage. In the 4G era, China accounted for about 60% of the world's mobile infrastructure market, and its share is unlikely to diminish with the rollout of 5G networks, according to Ekholm. Guaranteed a much bigger slice of this market than their Western rivals, China's vendors have a dependable and substantial source of revenues they can invest partly in future research and development. In this way, China's market fix helps Huawei to compete outside China.

Despite the headwinds, Ekholm now sees an opportunity to improve Ericsson's standing in China. With operators poised to hand out new 5G contracts, his goal is to raise Ericsson's market share to more than 10%. The target looks achievable, says Strand, because the Chinese may want to show they can play nicely while the US continues to pummel Huawei on security grounds.

There are other reasons for optimism. Whatever the government wants, China's commercially minded operators will not be in favor of a dominant Huawei and may lobby for a more even mix of vendors in the 5G market. Nokia's nerviness could be a good sign for Ericsson. With its stake in Nokia Shanghai Bell, it may already look too big to Chinese authorities. Some rebalancing could favor Ericsson.

Yet any real shake-up seems highly improbable, regardless of Ericsson's return to form. In free markets, the Swedish vendor looks more competitive under Ekholm than it has in years. Its RAN market share was in touching distance of 30% at one stage last year, according to Dell'Oro. During the last two years, it has picked up contracts at Huawei's expense in parts of Europe and Latin America where the Chinese company faces no restrictions.

In a global market dominated by a handful of suppliers, no fair process these days would leave Ericsson dwarfed by Chinese competitors. Fair treatment in China is not what Ericsson and Nokia can expect.

R Clark 10/22/2019 | 9:22:08 PM
Impunity The EU had the chance to take on China vendor subsidies five years ago but squibbed it - in part because the vendors themselves didn't want to go there. Couldn't have sent a clearer signal that China can act as it pleases.
Reply | Post Message | MESSAGES LIST | START A BOARD
EDUCATIONAL RESOURCES
sponsor supplied content
5G Voice in a nutshell. Learn it in 5 minutes!
Transforming Singapore's future with 5G: Singtel - the first and most powerful 5G standalone network in Singapore
The recipe for 5G slicing success: Far EasTone and Ericsson's world-first 5G end-to-end multiple network slicing trial
Canadas 5G future: How Rogers deployed Canada's first 5G standalone network
Why IMS Needs to be "Any Cloud-Native"
5G: The Race Cant Be Won Without The Crew Onboard
Digital Marketplace: The New Telecom Frontier
Network Optimization: Non-Real-Time RIC Trial Analysis
Vendor Interoperability with Service-Based Architecture
The Outlook for Open vRAN
Educational Resources Archive
More Blogs from Morris Lore
Rakuten's energy use soared on mobile rollout