Rakuten's 4G network is still the slowest in Japan

Rakuten is an upstart mobile provider working to challenge a trio of established incumbents with a state-of-the-art network running cutting-edge technologies. However, new research shows that the operator's 4G network is still the slowest in Japan.

"When comparing download throughput, Rakuten's median download throughput at 16.16Mbit/s is around 9Mbit/s lower than the other major operators," writes network monitoring company Tutela Technologies in a post detailing its evaluation of the performance of Rakuten's 4G network. 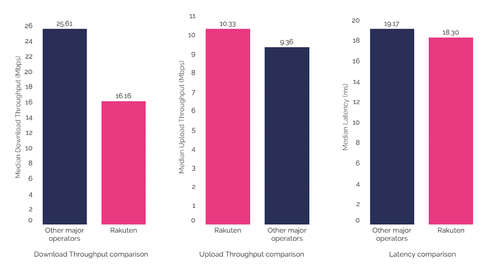 Tutela looked at the upload, download and latency speeds for Rakuten and its rivals Docomo, SoftBank and KDDI's au. Click here for a larger version of this image.
(Source: Tutela)

Tutela, recently purchased by Comlinkdata, obtains its data by inserting a tiny bit of testing software into some smartphones – software that runs in the background and actively tests things like network speeds. The company counts over 250 million phones running its software.

Tutela's findings on Rakuten comprise over 10 million mobile throughput and latency tests collected from April 8 to September 15, 2020. The firm said its analysis focuses exclusively on Raktuen's 4G network and not on its newly launched 5G network because "sufficient data on 5G is not available."

Importantly, Tutela applied its own "Excellent Consistent Quality" rankings to all of the providers in Japan. The firm said its overall metric for user experience comprises a range of common but high-intensity use cases "such as 1080p video streaming, live mobile video broadcasting, online gaming and HD video calls." The firm found Rakuten again at the bottom.

Tutela applied its Excellent Consistent Quality rankings to all of the providers in Japan. Click here for a larger version of this image.
(Source: Tutela)

"This notable difference between Rakuten and other major operators' Excellent Consistent Quality might be a result of speeds being throttled when Rakuten users are roaming on its partner network au," Tutela wrote.

The firm added: "A significant proportion of Rakuten users get a speed of approximately 1Mbit/s  particularly when connected to au's network  indicating throughput throttling. Further, Rakuten has also confirmed a cap on data usage while roaming on its domestic partner au's network. Users are limited to a maximum speed of 1Mbit/s after they have exhausted the allocated 5GB of data, which goes some way to explaining the spike in observed tests at 1Mbit/s, as well as the relatively low ECQ result for Rakuten users when roaming on other networks."

When roaming is stripped from the equation, Tutela said Rakuten's ECQ score rises to around 73%.

Tutela's new findings largely dovetail with those from rival OpenSignal, which published its own research in June. OpenSignal too found that Rakuten's 4G network is slower than those of its rivals. The firm also reported that Rakuten's 4G download speeds dipped significantly following the operator's launch of commercial services in April.

However, OpenSignal reported in June that Rakuten's users spent 55% of their time roaming, far higher than Tutela's 45%  which would make sense considering Rakuten continues to add new cell sites to its coverage area.

Citing OpenSignal's data, the financial analysts at MoffettNathanson speculated in a recent report on the reasons behind Rakuten's sluggish 4G network performance.

"It is, of course, possible that the open RAN network itself is at issue; there is a tradeoff between the flexibility of software versus the efficiency of hardware (silicon)-based solutions," they wrote in an October 1 report to investors. "Whether this is a durable limitation is unclear. But it is also possible that Rakuten compares unfavorably on the basis of network density; realized speeds of a network depend not just on cell site loading (i.e., how many people are sharing a cell site at any given time) but also cell site proximity. Speeds degrade with distance, and particularly steeply so in higher frequencies."

They continued: "'Mature' networks are not defined by just the macro cells that provide coverage, but by the huge number of augmentations, including small cells, indoor systems, signal boosters and repeaters, and so on, that have accumulated based on real-world identified needs and usage patterns, over many years. These augmentations can be thought of as an additional layer of network construction that is typically ignored in network buildout models that simply calculate coverage radii of macro cells and stop there."

Rakuten officials have said the company continues to tweak and improve the performance of its network.

And Tutela argued that Rakuten's network performance will likely improve: "As users increasingly rely on a robust network performance during these unprecedented times, Rakuten's superior performance on its own network may make it a competitor to watch out for once it gains considerable coverage in the country," Tutela wrote. "Having already reached 1 million subscribers within 3 months of its network launch, it may take over other operators in terms of market share due to affordable plans and better network quality."