An Inside Look at Cable's MVNO Business Model

Comcast and Charter have positioned WiFi as a cornerstone of their mobile strategy. And based on new figures from network-monitoring company Tutela, their efforts so far appear to be bearing fruit.

Tutela found that Comcast and Charter are moving substantial amounts of customer data off Verizon's LTE network and onto WiFi networks, including their own hotspots. That's critical to the cable companies' mobile business models because they're widely believed to pay Verizon for every GB their mobile customers download from Verizon's network. Thus, moving their customers off Verizon's network and onto WiFi essentially eliminates those pricey per-GB payments.

And, Tutela found, that's exactly what Comcast and Charter are doing. 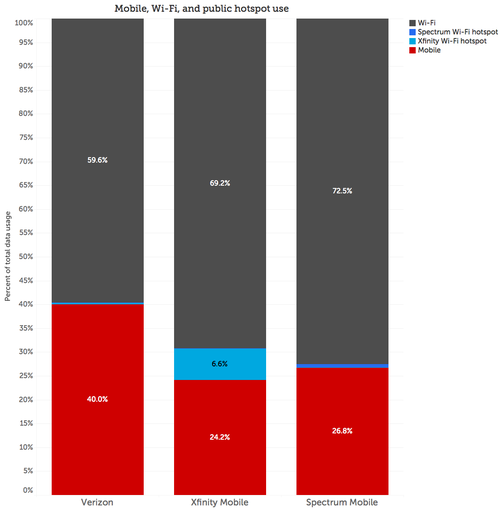 Tutela obtained its findings by inserting a tiny bit of testing software into some US smartphones, software that runs in the background and actively tests things like network speeds. The company counts over 250 million phones running its software.

In the above chart, Tutela monitored Android phone usage nationwide for a year. The firm noted that Comcast's public WiFi hotspot network in particular has been successful, given that the cable company's "xfinitywifi" shows up as the most common WiFi ID nationwide. Further, the firm said Comcast's Xfinity-branded WiFi hotspots on average provided speeds a third faster than the speeds available on Verizon's network -- meaning that customers who were pushed from cellular onto WiFi enjoyed speedier connections as a result.

Comcast and Charter both offer mobile services to their existing cable customers in their cable footprints through an MVNO agreement with Verizon. MVNOs like Comcast's Xfinity Mobile and Charter's Spectrum Mobile basically piggyback on the wireless network of operators like Verizon; MVNOs provide services like activation and billing while network operators handle the underlying connectivity. The MVNO relationship between Comcast and Charter and Verizon was a part of the cable companies' sale of their AWS spectrum holdings to Verizon in 2011 for $3.6 billion.

Although the cable companies have never disclosed the exact terms of their MVNO agreement with Verizon, both sides continue to maintain that it's mutually beneficial. For example, in 2016 Verizon's CFO said it was a "good agreement."

But Comcast and Charter have made no secret of their desire to reduce their payments to Verizon. For example, Comcast boasts of 18 million public WiFi hotspots that its mobile customers can use. And Charter continues to test operation in 3.5GHz CBRS spectrum and dual-SIM technology that many believe could pave a way for the company to eventually offload more traffic onto a CBRS network that it owns outright.

At issue here is the notion of "owner's economics," wherein profit margins widen when companies actually own the network they're using. It's essentially the same calculous that renters face as they begin hunting for a home to buy.

Either renting or owning, it's clear that Comcast and Charter are having an effect on the US mobile industry. The analysts at Wall Street research firm Cowen recently predicted that the two cable companies will capture 40% of the 800,000 postpaid phone customers the overall US wireless industry will gain in the second quarter of this year.

Altice is scheduled to join the party in the coming weeks via an MVNO agreement with Sprint.