The use of higher frequencies to support new 5G services has pros and cons for operators. Higher bands come with more spectrum for a turbocharged connection. They also flop on longer-distance journeys, or when confronted with the flimsiest of barriers. Even foliage can halt some very high-frequency signals.

No sensible operator expects to use those bands to provide a nationwide service. The uncertainty is whether a network engineered for the 5G midband  spectrum that usually falls between 3.4GHz and 3.8GHz  can be deployed on top of the existing "grid" of mobile sites.

Europe's operators designed 3G and 4G networks for spectrum between 800MHz and 2.6GHz, with superior propagation. Unless extra sites are built, the difference threatens a spotty network service.

Orange, which launched a 5G service in France last week, is determined to avoid that.

"It is important not to have salt-and-pepper coverage," said Michael Trabbia, the operator's chief technology officer, during a call with reporters. His target is to ensure most big cities are covered in 2021. In the next two to three years, most of the French population will have access to 5G, he promises. 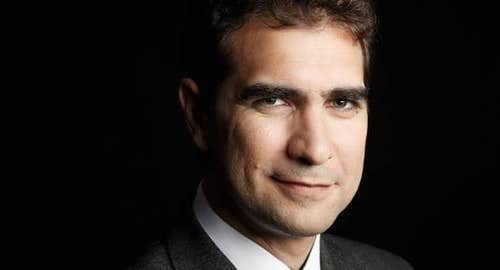 Orange's Michael Trabbia is putting his trust in 5G efficiency.

Does this mean Orange plans investment in new sites to address the shortcomings of its 3.4-3.8GHz 5G spectrum? Such "densification" does not seem to figure prominently in the French incumbent's strategy. "We are using more efficient technology and think we will be able to have the same coverage and won't need to add sites," Trabbia said in response to Light Reading's question.

While some new infrastructure might be required in very busy areas, such as sports stadiums and train stations, "overall we don't expect to have a big increase in the number of sites for coverage reasons," he said.

Trabbia did not elaborate on what he meant by "more efficient technology," but Gabriel Brown, a principal analyst at Heavy Reading, thinks he was probably referring to beamforming.

Where 4G signals are like floodlights that wastefully blanket entire zones, 5G can be concentrated like a torch on a specific target. This beamforming, it is hoped, will compensate for the poor coverage characteristics of higher frequencies.

Orange is not the only service provider that has downplayed the need for additional sites. During a presentation in late 2018, Three UK said the most advanced 5G antennas would provide nearly the same coverage at 3.4GHz as a more basic 4G unit at 1800MHz.

Build and they will come?

But Europe's biggest operator appears to think differently. At the end of 2019, Deutsche Telekom had about 31,200 mobile sites in Germany, its biggest European market. To provide a nationwide 5G service, it would require about 50,000, said Timotheus Höttges, its CEO, in October 2018.

This construction effort is partly about filling gaps in the 4G footprint. That network covered around 98.1% of Germany households at the end of 2019, while Orange boasted a 4G service with better availability of 99% in France. "Sites" could also partly refer to the sort of stadium and train station investments that Trabbia has in mind.

But unless it accounts for most of them, Deutsche Telekom seems to be on a different path from Orange. Data published by the Agence Nationale des Fréquences shows Orange has 24,395 4G sites in mainland France.

Beamforming has not persuaded China to slow down, either. By the end of this year, up to 700,000 sites on the Chinese mainland will support 5G technology, according to press reports, and China plans to add another million next year. That investment splurge would give it 12.14 5G sites for every 10,000 people and 4.59 sites for every ten square miles.

China's 5G rollout has prompted concern the US and Europe are falling behind. In a report published in 2018, Deloitte said China was outpacing the US on 5G site construction and called this "a disturbing trend."

At the time, it calculated that China had 14.1 mobile sites for every 10,000 people, compared with 8.7 in Germany and a trailing 4.7 in the US. Today, France's 4G footprint of 46,823 sites produces a comparable ratio of about seven.

"China and other countries may be creating a 5G tsunami, making it near impossible to catch up," said Deloitte in its 2018 report. 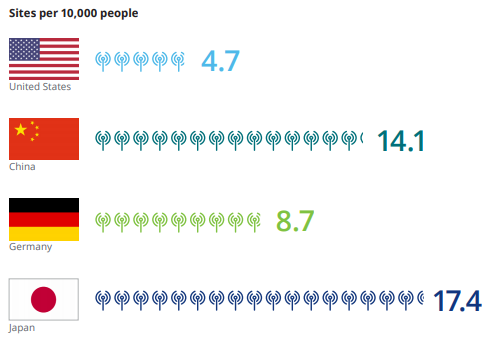 None of this means Orange is mistaken, of course. If beamforming and other 5G capabilities work out as planned, Orange and like-minded operators may incur far less cost to provide a good 5G service.

Simplified designs could help. Rakuten, an e-commerce firm building a fourth mobile network in Japan, says it has realized a 30-40% improvement in coverage per site by combining some elements and foregoing others.

More spendthrift players risk upsetting investors if there are no commercial gains, and few stakeholders regard 5G as a money-making opportunity in the mainstream consumer market. "We need it simply to cope with traffic," said Trabbia about his top 5G priority. A massively densified network might not be a very profitable one.