BT on the back foot after 5G spectrum shake-up

Two 5G auctions that raised £2.7 billion (US$3.1 billion) for the government have left UK operators with some jumbled-up frequency allotments. The process of disentangling that mess, and sewing the pieces back together in long contiguous blocks, is now underway. So far, it is O2 that has emerged on top, and BT that risks losing out.

Contiguous spectrum is important to operators for reasons of cost and service competitiveness. Above all, if a company owns two frequency licenses separated by a vast gorge of other spectrum, it will probably need a different radio unit for each block.

This is exactly the situation that has faced UK operators. The country's first 5G auction, in 2018, had awarded licenses between 3410MHz and 3580MHz. Its second, which wrapped up last month, doled out airwaves between 3680MHz and 3800MHz. At the extremities, an operator's 5G allocations might be 390MHz apart.

Three, the smallest of the four networks, was the only one happy with the status quo. Thanks to an earlier takeover of spectrum-rich UK Broadband, it has seized control of all territory between 3580MHz and 3680MHz. Everyone else was left peering squinty eyed across Three's vast estate for a glimpse of their other 5G property.

But a deal between O2 and Vodafone has now brought each company's two allocations much closer together. O2 has effectively traded its 3500MHz to 3540MHz block for Vodafone's 3720MHz to 3760MHz one. The deal leaves O2 with 80MHz of joined-up spectrum and Vodafone with 50MHz and 40MHz allotments separated by a relatively narrow 40MHz channel. 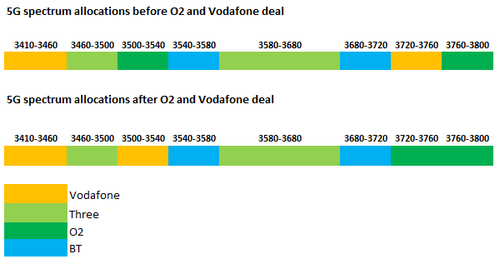 Proximity is probably good enough, says Gabriel Brown, a principal analyst with Heavy Reading. When it comes to frequencies, the capability of 5G radio units is measured on the basis of instantaneous bandwidth (IBW) and occupied bandwidth (OBW), he tells Light Reading. IBW indicates the range it can support, while OBW refers to the maximum bandwidth  the sum of the different parts  it can handle.

"The good news is the newer radio unit products have large IBW and OBW, so operators have a lot of flexibility," he says. "It's ideal to have contiguous spectrum, but products are helping operators where they don't have that."

So far, so good. Unless you are BT. Left out of the recent deal-making, its two 5G allocations are perched on either side of Three's encampment, with 100MHz between them. From one end to the other, that is a 180MHz range.

Predictably enough, BT does not sound overjoyed. "We would have liked contiguous spectrum but not at any price," said a spokesperson by email. "We have a strong spectrum portfolio to continue to deliver industry-leading performance in 5G and remain open to a future spectrum trade."

But who would bite? Vodafone and especially O2 would seem to have little incentive to engage in further spectrum trading after their recent deal. The optimal solution for BT would be to acquire the lower part of Three's 3580MHz to 3680MHz block. In exchange for that, Three could take BT's 3680MHz to 3720MHz license and retain a contiguous 100MHz allocation. If Three agreed to that, however, it would be helping a rival without clearly advancing its own position.

It is not all bad news for BT, though. The rejigging by O2 and Vodafone means some radios might have to be replaced. If so, that could slow down 5G deployment and drive up costs. BT would naturally stand to benefit from any such delay.

BT also says it needs only a single radio unit to span the 180MHz range of its two existing allocations. If it already had equipment, the operator would have few worries and no real need to swap spectrum. Still, it remains open to a trade.

If further trading is required, the sooner the better, says Brown. "It's the kind of thing that should be sorted out before too much equipment is deployed ... just in case."

Update: The penultimate paragraph has been changed since this story was first published to reflect new comments from BT.