US pay-TV subscriber losses in the second quarter of 2021 slowed slightly year-over-year, but the overall picture remains far from rosy as the gains made by virtual multichannel video programming distributors (vMVPDs) continued to be dwarfed by staggering losses among the industry's traditional cable, telco and satellite TV players, according to MoffettNathanson's latest Cord-Cutting Monitor report. 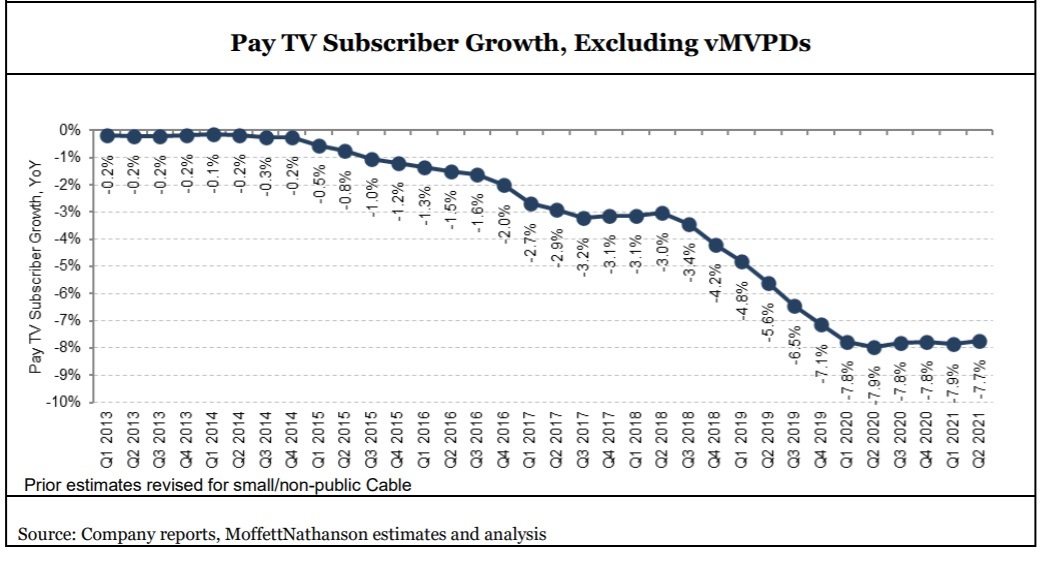 MoffettNathanson estimates that vMVPDs now have about 12 million subs. But the "conversion rate" (the rate at which consumers leave a traditional pay-TV service and convert to a vMVPD option), is only in the neighborhood of 32%.

"Once again, the vMVPD industry, now burdened by higher retail pricing, is only converting about 1/3rd of the traditional subscribers who cut the cord over the past year," MoffettNathanson analyst Craig Moffett wrote.

When traditional and vMVPD results are combined, the US pay-TV industry lost 1.12 million subs in Q2 2021, slightly better from -1.22 million a year ago. 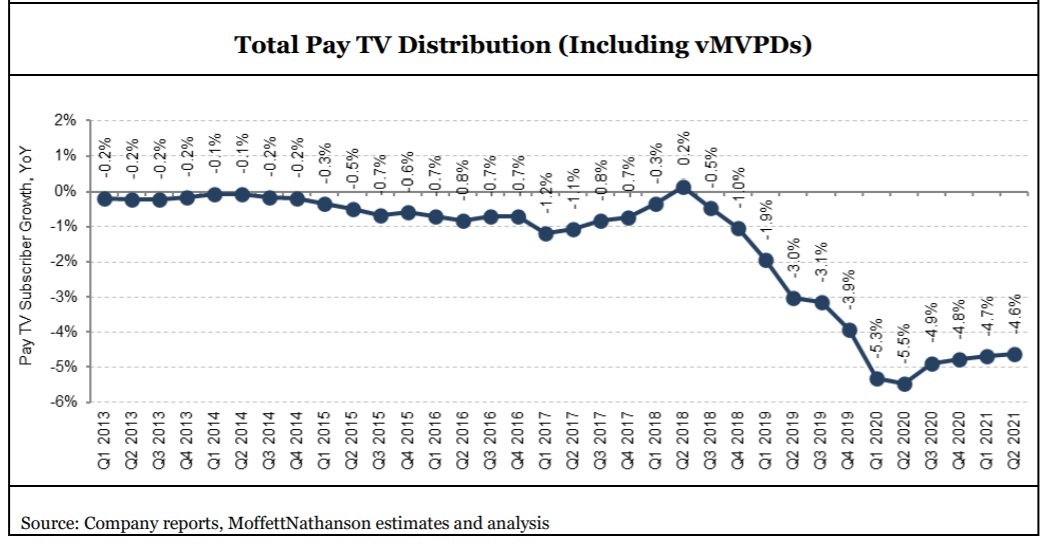 "As measured by the absolute number of subscribers, declines for traditional Pay TV subscribers have begun to moderate," Moffett explained. "In percentage terms, however, when measured against a steadily shrinking denominator, percentage declines are actually remarkably steadyWith a smaller denominator, the percentage rate of decline at 7.7% YoY was little changed from last quarter (-7.9%) and from a year ago (-7.8%)."

Moffett estimates that about 38.5 million households have now either cut the pay-TV cord, or have never subscribed in the first place, since Q1 2010. "Only 11.9M of those have been recaptured by vMVPDs, leaving 26.9M households totally outside the live TV ecosystem," he added.

Moffett noted that US pay-TV, which is shrinking by 7% to 8% per year, cannot be described as "stable," but the recent consistency of the declines has reached an "orderly" stage of sorts. "With vMVPDs clawing back about 1/3rd of those traditional cord-cutters, we are settling into a near-term contraction of 4 to 5% per year," he predicted."

Moffett is also starting to wonder if live televised sports  considered the "glue" holding the traditional pay-TV package together  is losing its bonding strength. Although die-hard sports fans are likely to stick around, declines in viewership over the past year of all major sports, including dismal viewing results for the Tokyo Summer Olympics, indicate that the base of more casual sports fans is in some jeopardy.

But Moffett believes it's too early to draw any firm conclusions. "As we enter fall with the return of college and pro football, and with fans flocking to televised games, stadiums and mobile betting apps, sports viewership trends could improve," he said, noting that the next few quarters will be instructive about the true direction of sports viewership.

"We keep coming back to this simple question: if sports aren't the glue to hold all this together, then what is?" he asked.