Roku has begun to push out a batch of spring product updates that span its hardware lineup as well as its operating system for streaming players and integrated Roku TVs.

Those updates and product launches are arriving on the scene in upcoming weeks as Roku looks to stay at or near the top of the hotly contested streaming platform market. Roku ended 2020 with 51.2 million active accounts, inching it ahead of the last count for Amazon's Fire TV. Meanwhile, Google continues to encroach on them with Android TV and its new Google TV enhancement while Apple reportedly threatens to get more serious about its lagging position in the broader smart home market.

On the hardware side, Roku introduced the Roku Express 4K+, a player that will replace the Roku Premiere as the company's entry-level 4K player, with the hope that some users, such as pay-TV cord-cutters, will buy it as a second of third 4K-capable streamer in the home. The new model supports both the 4K and High Dynamic Range (HDR, HDR 10 and HDR+) video formats, comes with a voice remote, and is priced at $39.99. The device's voice navigation system is compatible with both Amazon Alexa- and Google Assistant-enabled devices. The addition of AirPlay 2 also allows the device to connect from Apple iPhones, iPads and Macs, while HomeKit support links Roku devices via Siri or the Home app on Apple devices.

Roku also unveiled the Roku Streambar Pro, a product that bakes in a 4K/HDR streaming player and dual-band Wi-Fi. The Roku Streambar, an upgrade of the original Roku Smart Soundbar that includes a "virtual surround" feature designed to provide immersive sound without additional back speakers, will be available at the end of May at Roku.com and at major retailers in June. It will sell for $179.99  the same price as the original Roku Smart Soundbar.

That mix of players and player/soundbar combos rounds out a streaming player lineup that also includes the Roku Express ($29), Roku Streaming Stick+ ($49.99) and Roku Ultra ($99).

Further rounding out the updated hardware is the Roku Voice Remote Pro, a premium voice remote with a rechargeable battery (via a MicroUSB port that, the company claims, provides a two-month charge), a lost remote finder and programmable buttons that can be used to shortcut the user to specific apps. The new remote also supports both hands-free voice commands (using a "Hey Roku" wake word) and push-to-talk. Roku isn't bundling the new premium voice remote with any streaming players or TVs, but is instead selling it as a standalone device for $29.99 starting April 13.

Roku's software updates center on OS 10, an update rolling out in May that extends support for Apple AirPlay 2 and HomeKit to HD devices in Roku's lineup (following an earlier rollout to select Roku 4K players and 4K TVs). It also supports HDR10+, a new automated Wi-Fi detection system and an enhanced live TV guide for The Roku Channel, a streaming product that aggregates free, ad-supported fare, along with access to premium SVoD services. 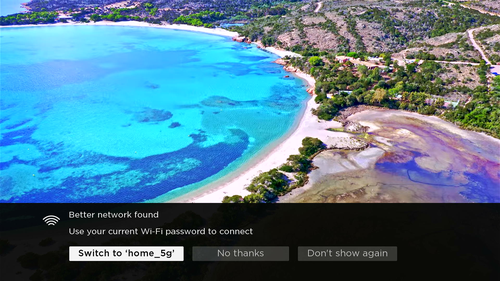 Tech that seeks out and finds the best Wi-Fi connection/band on the home network is among the features tied to Roku OS 10.
(Source: Roku)

New to the OS is an instant resume feature that lets viewers restart a piece of content when they last left an app/channel. Roku is initially making this available to 15-plus channels and apps, including AT&T TV, Starz, Fubo Sports Network, The Roku Channel, Fox Business Network, HappyKids TV, Plex.tv and FilmRise, among others. That base of supported channels is expected to expand as other content providers integrate the new feature, Lloyd Klarke, Roku's director of product management, said.

Also new is a dynamic guide for live streaming feeds in The Roku Channel that lets users personalize which channels appear and which are hidden.

The auto Wi-Fi network detection element in OS 10 will determine if the device is on the best band on the home network and prompt the customer to flip to another band if the current one is sub-par. That same system will also come up when users are setting up a new Roku streaming device.

For Roku TVs, Roku OS 10 also adds an auto-configuration system for game consoles. For example, when a supported game console is connected to an HDMI port on a Roku TV, the input tile on the user's Roku home screen will automatically change to the game console icon. The OS can also detect some specific game console capabilities, such as Game Mode, an option for a lower-latency picture.