The slowdown in Disney+ subscriber growth in the most recent quarter won't last, as the company's marquee, premium streaming service is poised to see subscriber growth accelerate rapidly in the second half of 2022, thanks to a surge of new content and expansions into dozens of new markets.

At least that's how Disney execs see things shaping up, as the company does not believe a few bumps on the road will prevent it from reaching its destination. Disney+ remains on track to reach between 230 million and 260 million paid subs by the end of fiscal 2024, Bob Chapek, CEO of The Walt Disney Company, said Thursday during the company's fiscal Q4 earnings call. Disney+ is also on track to achieve profitability in fiscal 2024, he added. 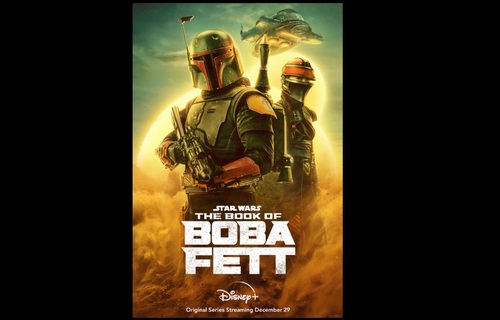 Ahead of new content releases and market expansions targeted for 2022, Disney+ might get a helpful subscriber bump among Star Wars fans with the December 29 premiere of The Book of Boba Fett. But some analysts wonder if the streaming service will need to expand beyond its core franchises to hit 2024 subscriber targets.
(Image source: The Walt Disney Company)

"We remain focused on managing our DTC [direct-to-consumer] business for the long term, not quarter-to-quarter," Chapek said soon after the company reported that Disney+ added a lackluster 2.1 million subs in the period, extending its grand total past 118.1 million. Disney shares were down more than 6% today because of the slowdown.

The pandemic temporarily curtailed production of new content for services such as Disney+, but the company now has more than 340 originals at various stages of development and production for Disney's stable of DTC platforms over the next few years, Chapek said.

Disney, he added, plans to spend lavishly on content to fuel its global subscriber goals. The company now expects total content expenses to exceed the $8 billion to $9 billion slated for fiscal 2024 that was announced at Disney's last Investor Day. The analysts at ISI Evercore are modeling for an incremental $1 billion in content spend for fiscal 2024.

Chapek said the primary driver will be further investment in local and regional content as Disney+ prepares to vastly expand its reach around the globe. Disney+ is currently available in more than 60 countries, including its recent launch in Japan and launches coming this week and next in South Korea, Taiwan and Hong Kong. Next year, Disney+ will add more than 50 countries in regions spanning central and eastern Europe, the Middle East and South Africa.

"Our goal is to more than double the number of countries we are currently in, to over 160 by fiscal year 2023," Chapek said.

As for Disney+'s return to historic subscriber growth levels, the company expects that recovery to start in the third and fourth quarters of FY 2022, driven largely by the aforementioned market expansions. Evercore ISI expects Disney+ to add 48 million subs in FY 2022, with the bulk of those adds weighted toward the back half of the year.

Most analysts believe that Disney+ will hit its FY 2024 subscriber targets. But some are concerned about how many will skew to Disney+ Hotstar, a service focused on India, Malaysia and Thailand that carries a lower ARPU than Disney+ does in other markets.

Michael Nathanson, analyst with MoffettNathanson, expects Disney+ to reach 245 million subs by FY 2024, but forecasts that 46% of that mix will be Disney+ Hotstar subs (Disney+ Hotstar accounted for about 37% of the total Disney+ sub base at the end of fiscal Q4). As such, Nathanson maintained a Disney+ 2024 revenue estimate of $13.6 billion, a number the analyst cut by more than $1 billion last month.

But Nathanson also wonders if Disney+ is too narrow a product and will be challenged to reach into segments of the market that go beyond superfans of Marvel, Pixar or Star Wars content. On that point, Disney+ will need to become more Netflix-like by developing "off-brand, general entertainment content that has the feel of Netflix" or even Disney's own Hulu streaming service, he argued.