People often wither and lose mass as they grow older. The same appears to be true of the UK's most ancient network operator. The emergence of broadband rivals guarantees BT a smaller role in fiber than it enjoyed in copper, when competitors were mainly piggybacking on its lines. Headcount has dropped by nearly 8,400 employees in the last three years as bosses axe jobs to protect profits while sales shrink. Like an ageing athlete, BT is now part-retiring from sport as well.

Flagged in February, exclusive negotiations with Warner Bros. Discovery have culminated in plans to set up a 50:50 joint venture for TV sports. Into that, the UK operator will pour the entirety of its BT Sport unit, while the US media company contributes its Eurosport UK content. In the short term, the scheme will lower BT Group's annual revenues by £500-600 million ($610-733 million). Further on, it is a "route to exit," BT said in its earnings release today.

However BT presents this move, it is a sad end to its standalone sports career. Under Gavin Patterson, BT's former soccer-mad CEO, BT had spent vast sums on the rights to screen top-flight matches, launching an aggressive tackle at sports powerhouse Sky. Now it seems to be limping off the pitch. It is to receive a £93 million ($114 million) payment from Warner Bros. Discovery as part of the deal, but could earn up to £540 million ($659 million) in future, depending on certain conditions being met. 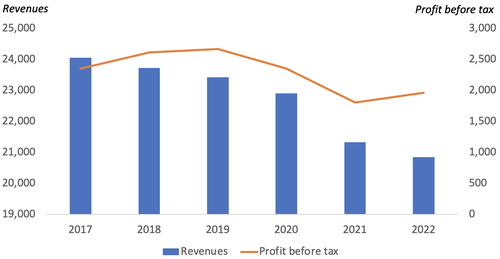 Paolo Pescatore, an analyst with PP Foresight, described the tie-up as "a marriage of convenience for both companies," pointing out that it will strengthen Warner Bros. Discovery in sport and allow BT to exit completely. A question mark over the joint venture is whether it will have the financial clout to renew and buy sports rights in an increasingly competitive market, he said via email. "There are new players waiting in the wings and let's not forget DAZN, who lost out on acquiring BT Sports."

Having calculated that multi-billion-pound investments in sports were a costly distraction from the mission of building higher-speed networks, replacement CEO Philip Jansen has made fiber and 5G rollout his big priorities. Unfortunately, there has been no surge in revenues to match the colossal investments BT is making in new infrastructure. But had BT not invested, its situation would undoubtedly have been worse as rivals stormed the keep.

As things stand, the operator managed to limit its annual revenue decline to just 2%, meaning sales came to about £20.9 billion ($25.5 billion). Thanks to cost-saving measures, including headcount reduction, its adjusted earnings (before interest, tax, depreciation and amortization) were up 2%, to nearly £7.6 billion ($9.3 billion). But net profit after tax fell 13%, to less than £1.3 billion ($1.6 billion).

The splurge on infrastructure buildout chewed into free cash flow, which dropped 5%, to roughly £1.4 billion ($1.7 billion). At almost £5.3 billion ($6.5 billion), BT's capital expenditure was 25% higher than in the earlier fiscal year and is now equal to about a quarter of BT's revenues, up from a fifth previously. That is a much higher level of capital intensity than most of BT's peers report. Net debt has risen, too. At £18 billion ($22 billion), it is 2.4 times as much as BT's earnings and about £100 million ($122 million) more than BT's market capitalization in London.

The good news is largely operational. The project to roll out fiber to about 25 million homes by the mid-2020s continues to make progress, and BT now reaches more than 7.2 million premises. Yet only 1.8 million homes have signed up to a full-fiber service. Jansen described that as a "strong and growing early take-up rate of 25%." But the gap with the overall broadband take-up rate is huge.

BT's Openreach business reports about 29 million homes passed with superfast technology, an umbrella term for its fiber-to-the-cabinet, Gfast (a bandwidth-boosting system) and fiber-to-the-home deployments. Its overall number of broadband connections, deducting those classed as non-fiber, is about 18.3 million, producing a take-up rate of 63%, some 38 percentage points higher than the full-fiber figure.

Early days it may be for the full-fiber rollout, but dozens of other companies are also investing in fiber  a scenario BT never faced in the copper era. Even if many of them disappear, swallowed up in rounds of consolidation, BT's take-up rate seems bound to fall as the market makes that full-fiber transition. It is a worry because Openreach is today BT's big profit center, generating about 42% of its earnings last year. It was also the only discrete unit to report revenue growth, with sales up 4%, to about £5.4 billion ($6.6 billion), on deals with broadband retailers  including BT's own.

That consumer business, BT's largest unit in sales terms, is the one responsible for its 5G rollout, the other big infrastructure project. On deployment, BT does appear to have established a lead over its rivals, even if the gap is smaller than it had in the early days of 4G. This week, it claimed to have reached 50% population coverage with its 5G network, and 44% using the midband spectrum that supports faster connections. Details provided by its competitors to Light Reading suggest none is that close.

Yet 5G availability across this broad area has not led to sales growth for the consumer division, whose sales were an unchanged £9.9 billion ($12.1 billion) last year. BT has stopped disclosing details of overall mobile customer numbers but does lay claim to 7.2 million "5G ready" subscribers in its latest report. Despite this, average spending by a contract mobile customer fell 8% last year, to £17.50 ($21.35) per month.

The real deadweight for BT was the business-facing enterprise and global units, whose combined revenues dropped 7%, to around £8.5 billion ($10.4 billion). Even worse was the 9% fall in adjusted earnings, to roughly £2.1 billion ($2.6 billion). Several international assets have been sold, including operations in Italy, Latin America, Spain and France. Market conditions remain "challenging," said BT in its earnings update.

Headcount, accordingly, has fallen from about 106,400 in 2016 to around 98,400 today. Yet BT's revenues per employee have continued to slide. At about $258,000 last year, they were half the equivalent number for Deutsche Telekom, Germany's incumbent and one of BT's biggest shareholders. Prepare for more shrinkage ahead.