Google unveiled a closely held secret about YouTube TV after revealing this week that the OTT-TV service that launched almost three years ago has surpassed 2 million subscribers. 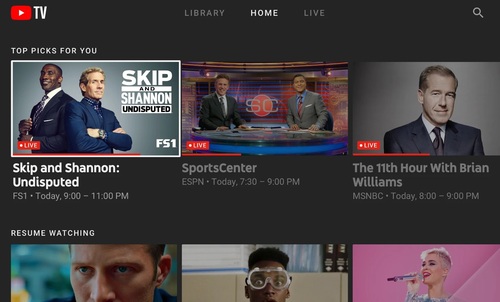 Available on multiple streaming platforms, YouTube TV starts at $50 per month and features more than 70 live channels, a VoD library and a cloud DVR.

Heading into the early part of Q1 2020, YouTube TV has also made an effort to attract hundreds of thousands of consumers who subscribed to PlayStation Vue, the Sony-owned service that was shut down last week. Plus, YouTube TV is benefiting from its partnership with Verizon, which is marketing the OTT-TV service as part of the telco's new, broadband-led "Mix & Match" packages.

YouTube TV's rise in the ranks of virtual multichannel video programming distributors (vMVPDs) puts it on the heels of Dish-owned Sling TV (2.69 million subs at the end of Q3 2019) and well past AT&T TV Now, the OTT service formerly known as DirecTV Now that ended 2019 with 1.14 million subs. Disney, which owns Hulu, will reveal streaming numbers today when it reports fiscal Q1 2020 results.

More pay-TV bloodshed
OTT-TV services are not replacing traditional pay-TV sub losses on a one-for-one basis as most streaming services have been forced to raise rates in recent months. But they are benefiting from widening losses by the top traditional pay-TV service providers. Four major US service providers that have reported Q4 numbers thus far (Comcast, Charter, AT&T and Verizon) have lost about 1.5 million subs combined in the period, about 300,000 worse than analysts at MoffettNathanson expected, and an already 700,000 worse than the losses from the year-ago period.

"[B]y the time the numbers are all final, we think that traditional cord-cutting will decline by a record -6.8% in the 4Q 2019," Michael Nathanson, analyst with MoffettNathanson, wrote in a report issued Monday. And even if pay-TV losses improve a bit in 2020, he doesn't anticipate a material improvement. "Although we do not yet have an accurate count of how virtual MVPDs performed in the quarter, industry contacts suggest that both Hulu Live and You Tube TV have crushed it," he wrote.