HDHomerun Premium TV, a service offered by specialist video tech and services firm Silicon Dust, appears to be the first casualty tangentially connected to a copyright lawsuit filed against Omniverse One World Television, a company that is helping to "power" several OTT TV services.

As reported Thursday by Cord Cutter News, Silicon Dust informed HDHomerun Premium TV customers that the service will be shut down over the next 30 days. Users on the Silicon Dust customer forum confirmed as much, posting the contents of an email delivered on Thursday (March 28):

We are writing to inform you that we will be ending the HDHomerun Premium TV service over the course of the next 30 days. All individuals currently subscribed to Premium TV will be able to continue their service until their current month of service has concluded, at which time service will not be renewed.

We want to thank you for your business, and we want to assure you that we are not done innovating. We are excited about upcoming plans for improving the cord cutting and cord shaving experiences.

Silicon Dust's email to customers did not elaborate on the reasoning behind the decision, but is likely the result of pressure from a copyright suit recently filed against Omniverse One World Television, a company that has been playing a key role in delivering a package of live TV channels to several OTT-TV services marketed by Flixon, Clikia, SkyStream, TikiLive and VivaLiveTV, among others. The Alliance for Creativity and Entertainment (ACE), a legal consortium consisting of several major programmers, studios and OTT players, is managing the lawsuit against Omniverse. (See Discovery Joins ACE's Legal Fight Against Piracy and ACE Slays the Dragon Box.) 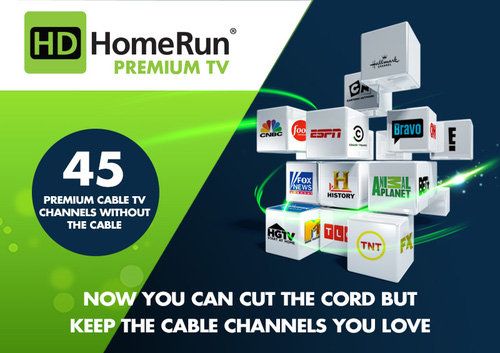 Omniverse CEO Jason DeMeo has insisted that his company plays by all the rules of pay-TV distribution, citing a joint venture with a New Jersey-based private cable operator called HovSat that, he says, has a 100-year deal that enables it to source content from DirecTV and distribute it nationally. DeMeo likened Omniverse's approach to a mobile prepaid model in which partners work on a commission basis and the HovSat/Omniverse partnership is the party that owns the customer relationship.

And it's not entirely clear that Silicon Dust has ever had a direct, day-to-day relationship with Omniverse, as there is yet another layer/party between the two companies, multiple people familiar with the HDHomerun Premium TV service said. Another source who has been studying and investigating Omniverse and its interworkings noted that some Omniverse partners also have master dealer agreements that enable them to sell content under other brand names and cross-marketing arrangements. Two sources said there are multiple master dealers in this configuration. Flixon is one of them, one of the sources said.

Silicon Dust was not available for comment Thursday night. Light Reading will update the story if the company offers more detail about the decision.

Silicon Dust did, however, explain on Twitter that other aspects of its business are unaffected by the decision to shutter the HDHomerun Premium TV service. Silicon Dust also sells tuners and video devices under the HomeRun HD brand, including models that are outfitted with slots for CableCARD security modules that enable and authorize consumers to relay digital cable services to other screens on the home network.

Clarification - the HDHomeRun "Premium TV" service is shutting down. Important omission on the title - we wouldn't want anyone misled.

Though Silicon Dust is not a defendant in the ACE-led lawsuit, ripples from it seemingly have touched the company. On March 8, Silicon Dust announced that Premium TV channels were no longer available on Fire TV devices per "a demand from Amazon," but did not elaborate on what was behind the demand.

Following a demand from Amazon, Premium TV channels are no longer available on FireTV devices. For continuing information, keep an eye on the following thread: https://t.co/kB7tHzzHY9

Silicon Dust launched HDHomerun Premium TV, initially with a package of 45 channels for $35 per month, last August. On Thursday, customers expressed their disappointment with the decision on Silicon Dust online forum. Some wondered why Silicon Dust didn't have a more thorough explanation for shutting down the service, while others wondered if there was a follow-up product in the works that would fall outside the shadow of Omniverse.

"What gives! No better explanation than that? I understand it is a month to month deal but 7 months and done?" user "Mattgob86" wrote.

"I'm pretty frustrated right now," explained another user with the "CareBearKiller" handle. "I really had hoped that SD was working with another upstream provider to bring premium channels to subscribers, in the event something happened to Omniverse. TBH, I'm surprised there wasn't a back up plan from the beginning."

"I'm not sure why people are confused why it is shutting down. Their provider, Omniverse, is under a lawsuit," wrote "spud1907," adding that the service has been inconsistent with respect to channel availably. "Might as well pull the plug. Move on. Don't hang your hat on this service."