Following integrations of OTT video services such as Netflix and support for voice-based search and navigation, Cox Communications is gearing up to launch another feature of the multiscreen video platform it has deployed through its X1 syndication deal with Comcast -- a cloud DVR.

Cox has plans to launch a cloud DVR offering later this year, a spokesman said. More than 1 million Cox video customers, or about 25% of that base, have the operator's new "Contour" product that's powered by X1.

That will enable to Cox to be on a better competitive footing against a wave of virtual MVPDs -- DirecTV Now, fuboTV, PlayStation Vue, YouTube TV, Philo, Hulu and Sling TV, among them -- that offer cloud DVR options and use those services to bump up ARPU.

Cox, which is also nearing the launch of a streaming product for broadband-only customers, has not announced pricing and storage options it will include in its iteration of a cloud DVR. But Comcast's cloud DVR for X1 offers some hints at what Cox's offering might look like. (See Cox Developing Version of Comcast's 'Flex' Streaming Product.)

Per the Comcast FAQ, the cloud DVR service is bundled in for no extra fee for all X1 subs with a local, set-top box-based DVR. Comcast's version provides 60 hours of X1 cloud DVR storage for each X1 DVR box in the customer's account. If the 60-hour limit is exceeded, the most recent recordings will replace older ones unless those older recordings are marked to be saved for one year. And while each X1 DVR box has about 150 hours of local storage, it's possible that not all recordings on the box are accessible on the X1 cloud DVR. 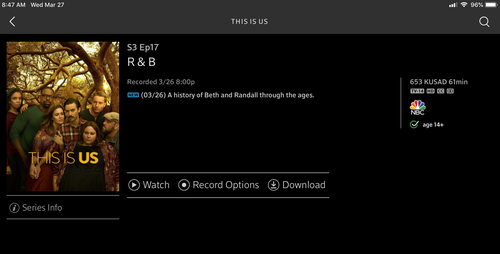 If Cox follows the Comcast gameplan, expect its cloud DVR service to allow customers to download recorded shows and movies to mobile devices. Pictured is a cloud DVR screengrab from Comcast's Stream app for the iPad.

Comcast's cloud DVR also lets X1 customers download recorded shows to a mobile device, and check them out like a library book. To stay on the right side of copyright rules, if a recorded show is downloaded, it is not available on the DVR until it is returned (again, like a book). Comcast's initial market launches of the cloud DVR got underway in 2014.

But there does appear to be some wriggle room. Rogers Communications, another X1 syndication partner, lets customers on its "Ignite TV" service store up to 200 hours of HD or 4K content for up to one year on its cloud DVR. (See Rogers Sparks 'Ignite TV' Using Comcast's X1.)

Among other US cable operators, Altice USA also offers a cloud DVR service (it can record as many as 15 shows at once and store up to 75 hours of HD video), and Charter Communications plans to launch one later in 2019.

Charter CEO Tom Rutledge is credited with helping cloud DVRs to sidestep US legal landmines. When he was a top exec at Cablevision Systems (now part of Altice USA), he and the company fought off copyright-focused lawsuits that challenged Cablevision's approach, which centered on a single-copy, remote-storage network DVR service. The approach leaned heavily on the US Supreme Court's 1984 Sony Betamax ruling that individual copies of TV shows are "fair use," and therefore do not violate copyright rules.