Cox Communications said it is developing a streaming product for broadband-only customers that will share similarities with Comcast's new "Xfinity Flex" offering, set to launch on March 26.

"We are working on launching [a] similar service in Cox markets to provide additional video choices that incorporate the best of Contour's guide (search, voice remote, UI), we're just still working out the details," a Cox spokesman said via email. He said the debut of that yet-to-be named product should happen in the next couple of months.

Cox hasn't announced pricing and what streaming apps will be available on its coming product. But Comcast's Flex product will feature a mix of free and paid video and music apps, offer integration with its "xFi" smart home management platform, and give those customers a way to add a pay-TV package. Comcast's product, which will cost an additional $5 per month, will initially use the Arris-made, 4K/HDR-capable Xi6 streaming client, and work in tandem with the MSO's compatible broadband gateways. (See Comcast Targets 'Xfinity Flex' at Broadband-Only Subs.) 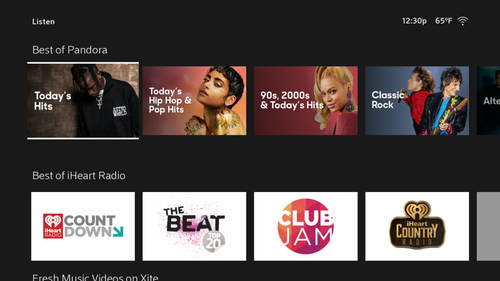 Cox is working on streaming product for broadband-only subs that will be similar to Comcast's 'Xfinity Flex,' which integrates a range of OTT music and video apps and runs on a small IP client device in tandem with a compatible broadband gateway. Pictured is a screen grab from Comcast's new Flex offering.

As an X1 syndication/licensing partner, Cox already has much of the baseline technology platform in place to underpin a Flex-like offering.

Cox's X1-powered multiscreen video offering, branded as "Contour," has been deployed to more than 1 million customers, and more than 25% of its video subscriber base. Cox's version of that pay-TV product uses a voice remote that has become a hallmark of Comcast's X1 platform. Cox has already integrated several OTT services, including Netflix and YouTube, that Comcast has integrated with X1 and the newer Xfinity Flex offering. Cox's Contour service does not currently offer a cloud DVR. (See Cox Takes Comcast X1 Platform National.)

This also won't be the first time Cox has tried to tailor a video streaming product to broadband-only subs and so-called cord-cutters. In 2013, Cox briefly tested an IPTV service called flareWatch that used a TV-connected device and software/UI developed by Fanhattan, a startup that Rovi (now TiVo) acquired for $12 million in 2014. (See Cox's IPTV Trial Flames Out, Cox Flirts With Fanhattan and Rovi Takes Fanhattan.)

During the presser about Flex on Thursday (March 21), Matt Strauss, Comcast Cable's executive VP of Xfinity Services, stressed that his company had "no ambition" to offer Flex outside of Comcast's service footprint. But he noted that X1 syndication partners are open to developing similar products that would be underpinned by the X1 platform.

Light Reading has asked the three other announced X1 syndication partners  Canada's Videotron, Shaw Communications and Rogers Communications -- if they are working on Flex-like products.