Expanding on accessibility features for X1 that have included a "talking guide," Comcast has introduced a new capability that enables people with physical disabilities to navigate the cable operator's TV service with only their eyes.

The new X1 eye-control capability -- for people who have spinal cord injuries, amyotrophic lateral sclerosis (ALS) or other physical disabilities -- is enabled by a web-based remote for tablets and computers that pairs with existing eye gaze systems, "Sip-and-Puff" switches and other types of assistive technologies, Comcast said.

The resulting technology enables viewers to change channels, set recordings and search for shows with a glance. Customers can also use the eye-control system to pull up the X1 Sports App (for real-time sports scores and stats), access the X1 accessibility menu (for closed captioning, video descriptions and voice guidance) and type out voice commands. 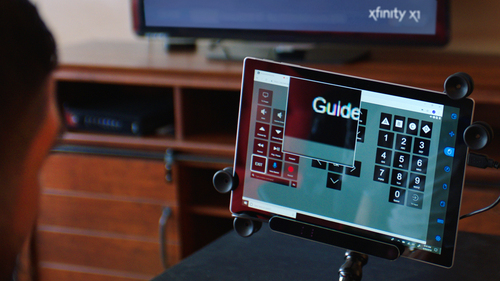 The new capability for X1 is enabled by a web-based remote for tablets and computers that pairs with existing eye gaze systems and other types of assistive technologies.
(Image source: Comcast)

Comcast, the first among its peers to bring this capability to the TV, said X1 eye control is available for no added cost. To make it work, customers are directed to visit xfin.tv/access and use their credentials to pair the web-based remote with their set-top box. Once the system is set up, each time the customer gazes at a button, the web-based remote sends the corresponding command to the TV.

"Changing the channel on a TV is something most of us take for granted but until now, it was a near impossible task for millions of viewers," Tom Wlodkowski, VP of accessibility at Comcast, said in a statement. "When you make a product more inclusive, you create a better experience for everyone and were hoping our new X1 feature makes a real difference in the lives of our customers."

Comcast said Jimmy Curran, a Philadelphia resident with Spinal Muscular Atrophy, was among the first customers to get the new X1 eye control technology, and posted a video about his use of the system:

Eye control for X1 is one of several accessibility features that Comcast has added in recent years. In 2014, Comcast went live with a "talking guide" for the blind and visually impaired, and soon followed with a Spanish version. Comcast began to offer the X1 voice remote in mid-2015, and has supported video descriptions for some programming, starting with NBC's coverage of the 2016 Summer Games in Rio.

About 65% of Comcast's 20.85 million residential video customers are on X1, a service that the MSO first launched in Boston back in 2012. Comcast also has announced X1 syndication deals with Cox Communications and three Canadian service providers -- Shaw Communications, Rogers Communications and Videotron.