Netflix, Amazon and Hulu have combined to dominate the video streaming landscape so far, but new competitive entries from Disney, Apple, WarnerMedia and NBCUniversal stand poised to gain ground and jeopardize the status quo.

A fresh study from MoffettNathanson and HarrisX shows what is at stake for the primary incumbents as the battle for the consumer entertainment dollar heats up -- WarnerMedia plans to introduce HBO Max on October 29, followed by a broad commercial rollout in 2020; Apple TV+ is set to launch on November 1; and Disney+ will debut on November 12. Peacock, NBCU's new streaming service, is slated to enter the fray in the spring of 2020.

"We are witnessing the dawn of a new age in media as four mega-cap companies are about to launch new streaming services," Michael Nathanson, analyst with MoffettNathanson, explained in a report that takes a closer look at the current dynamics for the direct-to-consumer subscription VoD market.

"Going forward, if you think we are at peak TV, you haven't seen anything yet as Apple and Disney are about one month away from launching their own services," the analyst added. "For now, this space will become increasingly crowded, which will raise the cost of both production and marketing."

Turf to protect
Clearly, the incumbents have lots of ground to protect. Penetration of consumer homes increased across Netflix, Hulu (now owned by Disney) and Amazon in Q3, with all three services aided by a strong slate of original content, including Stranger Things (Netflix), The Handmaid's Tale (Hulu) and Fleabag (Amazon Prime), MoffettNathanson and HarrisX found in a study based on data captured from 18,746 respondents between July and September 2019. 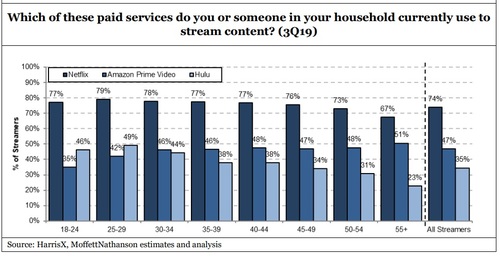 As Disney+ and Apple TV+ get off the ground in the coming weeks, Nathanson expects the recent positive engagement trends at Netflix and Amazon Prime Video to "reverse." Hulu, meanwhile, could get a bump, thanks to Disney's plan to bundle Hulu's ad-supported SVoD service with ESPN+ and Disney+ for $12.99 per month.

As a "fixture of everyone's bundle," Netflix appears to be the best positioned when consumers take multiple streaming services, the study found, noting that 51% of Netflix streamers also use Amazon Prime Video and 39% of Netflix subs also watch Hulu.

Before this new wave of streaming competition hits, the study also found that just 3% of Amazon Prime Video users take the $8.99 video-only plan (most get it through the full Amazon Prime subscription), while just 29% of Hulu SVoD customers take Hulu's commercial-free plan. About 43% of Netflix subs are on the service's $12.99 Standard plan, compared to 31% for its Basic tier ($8.99) and 26% on Netflix's Premium tier ($15.99).

Although SVoD incumbents and new entrants battle over consumer wallet share, it's also clear that most consumers view them as a cheaper option than traditional pay-TV. More than 50% of the study's respondents across Netflix, Amazon Prime Video and Hulu said they subscribe because of the high costs of regular pay-TV. A smaller segment said they cut the cord in favor of those OTT services due to content availability, convenience and the ability to binge-watch content.

The study also shed some additional light on password sharing. That phenomenon remains strongest at Netflix, with 15% of users accessing the service using someone else's credentials, compared to 11% of Hulu users and 6% of Amazon Prime Video customers.