Epix is the latest premium video service to break away from the shackles of the pay-TV package. 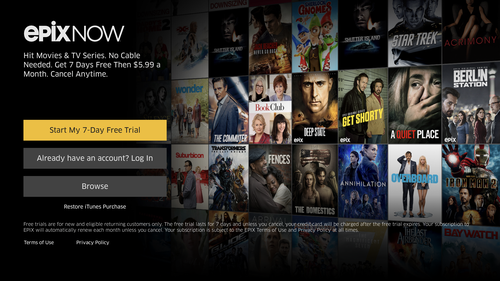 Apple TV (tvOS) is one of the platforms that's supporting Epix Now out of the chute.

Notably, Epix is available for sale via The Roku Channel, but it will soon offer Epix Now as a standalone on that platform. Epix currently does not offer its service on Amazon Channels, the subscription VoD aggregation service offered to Amazon Prime customers. (See The Roku Channel Adds One-Click Access to Premium OTT Video Services and Roku Targets Amazon With 'Premium Subscriptions'.)

Epix is adding a direct-to-consumer option to reach broadband-only homes and a growing group of cord-cutters that have given up on traditional pay-TV. In his Q3 report on the cord-cutting market, MoffettNathanson LLC analyst Craig Moffett estimated that there are now about 17 million homes that have cut the cord or have never taken a traditional pay-TV service. (See OTT-TV Gains Slow to a Crawl in Q3, but Cord-Cutting Does Not  Analyst and Broadband-Only Homes to Hit 40M by 2023: Forecast.)

Though Epix is trying to take advantage of this trend as a portion of consumers self-bundle with video, the challenge will be to ensure that Epix is part of that bundle. A recent study from Parks Associates found that 70% of US broadband homes already have at least one OTT service. TiVo Inc. (Nasdaq: TIVO)'s "Video Trends Report" for Q4 2018 found that consumers used an average of 2.75 OTT services (free and paid), up 26% from the year-ago period. (See Consumer Interest in à la Carte Declining  TiVo Study.)

The Epix Now service features "thousands" of movies and original series such as Get Shorty, Pennyworth (the origin story of Batman's butler, Alfred); Godfather of Harlem with Forest Whitaker and docu-series PUNK from Iggy Pop. A portion of the Epix Now library is available in 4K/Ultra HD. Epix Now also lets users download titles for offline viewing.

MGM took full ownership of Epix in 2017 after buying out the stakes held by Viacom and Lionsgate for about $1 billion.