But Dish's OTT-delivered, skinny-TV service, Sling TV, more than made up the difference with 214,000 subscriber adds, well above expectations of about 29,000. The caveat there is that Sling TV, a service that features smaller, slimmed down channel packages, is a lower-margin product than Dish's satellite TV offering. 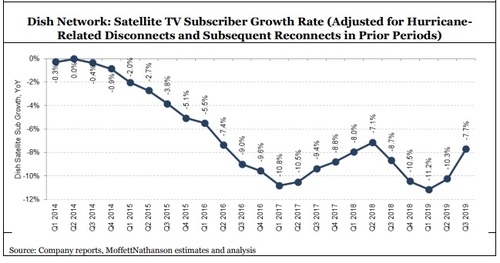 Speaking on Thursday's earnings call, Dish President and CEO Erik Carlson attributed the Q3 pay-TV sub gain to Dish's commitment in recent years to focus on profitable, higher-value customers that are less exposed to churn. "We're finding the right customers in the right geographies," he said.

The broader cord-cutting trend is "favorable for Sling," Warren Schlichting, EVP and group president of Sling TV, said, noting the OTT service will seek growth "responsibly" with a product that has a positive gross margin. "We'll continue to mind our knitting."

AT&T's pay-TV 'meltdown' has helped Dish, analyst says
In a research note, Craig Moffett, analyst with MoffettNathanson, wondered if the worst may be behind Dish from a satellite TV perspective, because their most "vulnerable subscribers have already left" and those who remain are in rural areas and otherwise "more committed" to stick around.

He also put forth the notion that Dish benefited from the "utter meltdown" at AT&T/DirecTV, which lost 1.4 million pay-TV subs in Q3. "Where else were they going to go?" Moffett asked.

"There is clearly a case to be made that the worst is over," Moffett wrote. "We've long speculated that Dishs steady contraction over the past nine years -- their subscriber base peaked at 14.3M in Q4 2010 and has contracted by 4.9M subscribers, or 34.1%, since then -- has left in its wake an increasingly rural (and inertial) core."

And the stabilization of Dish's video business is helpful to Dish in other ways. "Theyre going to need a stable satellite business to help fund their wireless buildout," Moffett noted.

Direct-to-consumer impacts
Charlie Ergen, Dish's chairman, weighed in on how the direct-to-consumer streaming trend, including the coming launches of Disney+ and HBO Max, will affect the pay-TV business and how Dish negotiates new distribution deals with programmers.

As Disney claws back more content for Disney+, which launches next week, "that doesn't increase their value to us," Ergen said of the media and programming giant. "That has to be taken into consideration in negotiations."

As for HBO Max, a service that will debut in May 2020, Ergen said it will be a "good product," but warned that it will likewise make life "tougher for linear distributors."

Ergen noted that HBO required Dish to guarantee contracts with a certain number of subscribers. "Obviously, that's difficult to do when you're competing against HBO themselves, particularly if they stick a lot of programming on HBO Max," he said.