Verizon introduced new pricing options for its wired, Fios-branded TV, Internet and home phone offerings, promising the move "disrupts the cable industry." The new plans signal Verizon's step away from the "triple play" of TV, Internet and phone bundles, as well as its rejection of short-term, promotional pricing schemes.

"Customers have been loud and clear about their frustrations with cable, and we've listened. As a result, we're transforming our approach to Internet and TV offers by giving customers more choices and more transparency," Verizon's Frank Boulben, SVP of consumer marketing and products, said in a release from the company.

Verizon's new "Mix & Match" plans separate the cost of Internet services from TV and home phone offerings, and do not include any additional extra taxes and fees. They also do not provide one- or two-year promotional pricing contracts.

"There's not a promotional roll-off and a dramatic price increase, which is the case today. That's a major pain point for customers," Verizon's Boulben told Variety. "They feel the advertised price isn't the actual price."

"The price you're quoted is the price you'll pay," Angie Klein, VP of consumer marketing for Verizon, told Cnet. "This is what consumers have been telling us they want." 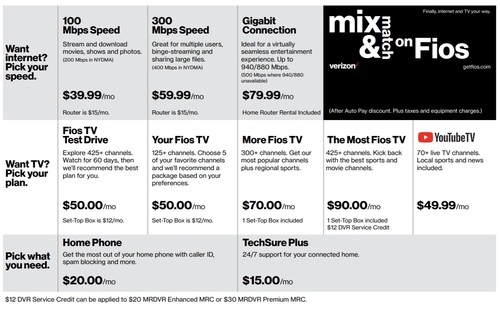 Cable vs telco
That Verizon is calling out the cable industry in its latest pricing gambit comes as little surprise. Telco providers like Verizon as well as cable companies like Comcast have been losing thousands of TV customers every month to streaming services like YouTube TV, Netflix and Disney+. Thus, competition for the nation's remaining linear TV customers is fierce.

Further, according to analyst firm Leichtman Research Group, cable has been eating telcos' lunch in the broadband Internet space. The firm reported that telcos' collective share of the nation's broadband Internet market has declined from around 36% in 2017 to 33% this year, while cable's share of the space has grown from 64% in 2017 to 67% this year.

Verizon ranked as the firm's second-largest telco provider behind AT&T, while Comcast, Charter and Cox clocked in as the nation's three largest cable providers, in that order.