Two of the biggest mobile network operators in the world participated in an Amazon AWS virtual event this week designed to highlight the role the cloud computing provider intends to play in the telecom industry. And both Verizon and Vodafone Business offered additional insights into their respective AWS-powered edge computing ambitions.

Executives from both carriers offered one clear takeaway: "We're just at the beginning with this journey," said Thierry Sender, director of IoT and real-time enterprise product strategy for Verizon. "There's so much more to come."

Sender said Verizon is testing edge computing with AWS in Chicago, and will roll out commercial services in unnamed major markets by the end of this year.

Similarly, Vodafone Business' Jennifer Gill Didoni said that "we are a few years away from the ubiquitous availability of MEC [multi-access edge computing]."

"I'm probably not the one that's going to develop the next killer app," added Didoni, the operator's head of cloud portfolio management. She noted that Amazon helps to connect developers with Vodafone's services.

But executives from both Vodafone Business and Verizon did offer further insights into their companies' edge computing partnerships with Amazon AWS, first announced late last year.

Vodafone's ambitions
"I see ourselves on the brink of a whole new set of applications," Didoni said. "It's about bringing the cloud to devices that have never really had it before."

Didoni explained that Vodafone is working to develop a network that can be adjusted based on the specific customer, their device, their location and their network needs, with latency speeds ranging from 100 milliseconds to 10ms. For example, some applications like augmented reality might need a certain set of network capabilities while medical imaging services might require a different set. 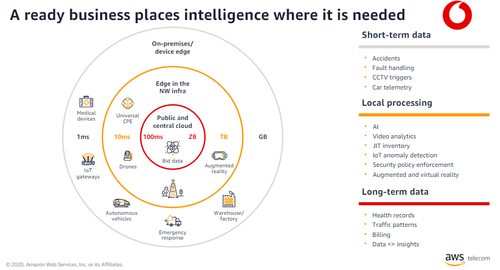 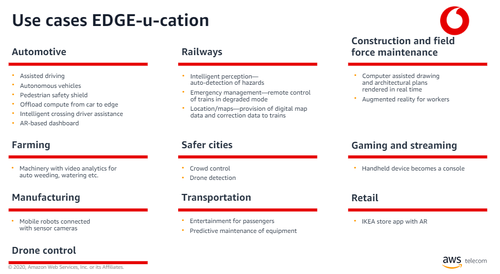 Finally, Didoni explained that most of Vodafone Business' initial edge computing use cases involve helping machines perceive what's around them. She listed examples ranging from cars locating pedestrians  thereby creating a "safety shield" for pedestrians  to farming equipment delivering the right amount of fertilizer and water in real time, to trains that can instantly perceive hazards on the track ahead, to cities scanning for dangerous drones on the skyline.

Verizon's use cases
Similarly, Verizon's Sender pointed to edge computing use cases in verticals spanning retail, manufacturing, healthcare and entertainment. Like Vodafone, Verizon is designing its service around the notion of providing different network performance characteristics to different users, based on where they are and what their needs might be. 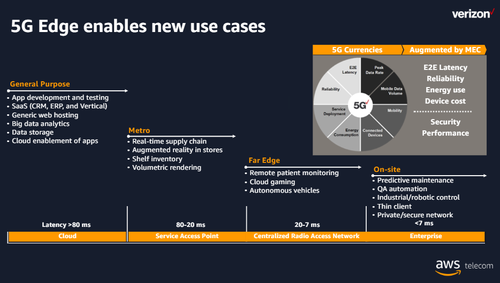 Verizon's edge computing use cases stretch down to applications using less than 7ms of latency. Click here for a larger version of this image.
(Source: Verizon)

Sender said that most of the edge computing use cases highlighted by Verizon are "not aspirational," but instead are either in testing or will be soon. He said Verizon has already demonstrated high-fidelity video gaming with Bethesda Softworks at a recent Amazon AWS event. That demo streamed a complex video game from a nearby server onto a phone with a low-power processor that would not otherwise be able to display the game.

Sender said the demonstration was "so ultimately expansive of what can be done."