Telus CTO: 5G is letting us down

DENVER -- Big 5G Event -- The telecom industry has been crowing about 5G as the most transformational G ever. And yet what did operators do when it finally turned up? Use it to provide faster mobile connections and broadband services.

That's the frank assessment of Ibrahim Gedeon, the amusingly outspoken chief technology officer of Canada's Telus, and he's not at all happy about it. "We just spend more money and don't make more money," he said during a keynote presentation at this morning's Big 5G Event in Denver. "5G is letting us down." 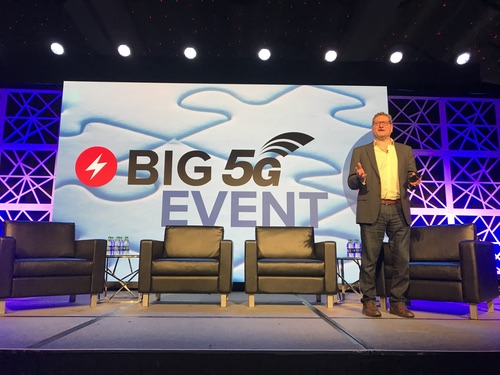 Ibrahim Gedeon, the chief technology officer of Canada's Telus, is not happy.

Gedeon clearly isn't a fan of some of the more advanced "use cases" that are typically associated with 5G, either. "Can you please raise your hand if you would like to be one of the first people in the world to have a surgeon operate on you using a reliable network?" he joked. He seems equally unconvinced by talk of 5G-powered autonomous cars. Everyone appears to be doing their own thing, he said, perhaps alluding to some of the recent battles involving carmakers and telecom players over the technologies that will ultimately be used.

So what does Gedeon recommend? In a nutshell, he thinks there should be less focus on the radio side and more on how 5G will affect other parts of the telco network, and specifically the "edge" -- a promised land of opportunity for telcos that has been somewhat overlooked.

At least, it has been overlooked in some critical ways, according to Gedeon. While operators such as Verizon, in the US, and Deutsche Telekom, in Germany, are busy talking about their edge plans and trialing new services, the industry has yet to address some critical edge-related issues. Above all, if the edge means deploying the telco cloud and IT resources at customer premises, such as a sports stadium, then where is what Gedeon calls the "demark?" What does the customer actually own?

"We need to think of the demark. We need to think about APIs and gateways  Everyone talks about cloudifying, but everyone is busy doing EMBB [enhanced mobile broadband] and autonomous vehicles," said Gedeon.

As for the technologies that do not meet Gedeon's approval, CPRI and E-CPRI are at the top of the list. These already have a bad rap in parts of the industry as semi-proprietary technologies used to support the "fronthaul" connections between radios and baseband processors. They are also an obstacle to simplicity, as far as Gedeon is concerned. "We need by design to think of a single metro. We have got to find a way to kill CPRI and E-CPRI because they will be the death of us. They will keep coming up with unique requirements for wireless networks that will deny us the right to put things on the same fiber-optic grid," he said.

Gedeon's remarks about the edge come just one day after his company announced a partnership with MobiledgeX, a software company owned by Deutsche Telekom (but managed separately) that is developing a middleware platform for third-party applications to run on an operator's edge computing assets.

The Canadian operator has said it will pilot MobiledgeX technology at "key locations" near the edge of its fixed and mobile access networks. That is a boost for the small company, which Deutsche Telekom is positioning as a global standard for middleware in edge computing.

"The idea is just to expose the edge cloud to developer communities in the form of APIs," said Alex Choi, Deutsche Telekom's senior vice president of technology, during a conversation with Light Reading earlier this year.

MobiledgeX is also in trials with South Korea's SK Telecom, where Choi was the chief technology officer before he left to join Deutsche Telekom in 2017.