LONDON -- Edge Computing Congress 2019 -- Anyone trying to figure out why telco progress with edge computing has been so hesitant would do well to speak with Telefónica's Cristina Santana Casillas. While uncertainty over the business case is at least partly responsible, technology shortcomings are also to blame, she made clear during a presentation at this week's event in London.

Like a schoolmistress chiding a classroom of underperforming students, Casillas ticked off a list of problems with the platforms that vendors are developing for edge computing. The feedback comes after the operator issued a request for information (RFI) to suppliers big and small, including Altiostar Networks, Altran, AWS, Ericsson, Hewlett Packard Enterprise, Huawei, IBM, Intel, Mavenir, Microsoft, MobiledgeX, Nokia, Ori, Saguna, Tata, Tech Mahindra and Volterra Edge Services.

Telefónica's first gripe is that vendors still have different approaches to the definition of MEC, despite its rebranding from "mobile" to "multi-access" edge computing by the European Telecommunications Standards Institute (ETSI) three years ago. Most vendors remain focused on mobile, grumbles Casillas, when fixed is just as important to her company.

Worse, most vendors are not following the guidelines and specifications developed by the ETSI Multi-access Edge Computing (MEC) Industry Specification Group (ISG), or any other standards, she noted. That has made integrating technologies with the telecom network a difficult process. Most vendors also fail to provide software development kits for application development, and when these have been forthcoming they are often proprietary. On the thorny issue of orchestration, most "flavors" of this would demand further integration effort by Telefónica. No vendor has a decent developer ecosystem. "They try but it is very poor," said Casillas.

And, critically, no solution that Telefónica analyzed provides interoperability with other MEC platforms.

That's a lot of issues. But Casillas wasn't stopping there.

The more "network-centric" companies that Telefónica examined shared various deficiencies. For one thing, their implementation of the ETSI MEC standard was deemed "low." They were also largely focused on business-to-business scenarios, did not scale well and came with clunky virtual machines -- in a throwback to the first generation of NFV (network functions virtualization) -- rather than cloud-native containers. The more "application-centric" companies scored better in this area but did not make use of ETSI MEC's application programming interfaces (APIs). "They think these have not got enough value for developers and are very complex," said Casillas.

That turns the spotlight onto ETSI itself. On the plus side for the standards body, Telefónica clearly expects ETSI to play a prominent role in the edge. That is not a huge surprise: As the main telco backer of ETSI's Open Source MANO initiative and a significant contributor to its NFV efforts, the Spanish operator has long been one of the specifications body's biggest operator cheerleaders.

Yet Casillas was relatively unrestrained in her feedback. "The ETSI MEC standard has gaps it is necessary to cover," she said. Among other things, Telefónica wants it to redefine an interface called MX2 so that mobile devices can communicate with the MEC platform about automatically connecting to the most appropriate edge site. The operator is also demanding greater support for app authentication and billing. And it is proposing two additional interfaces: MM11, which would expose capabilities so that any developer could deploy the same app across various telco networks; and MM12, for interconnecting different MEC platforms.

No Fan of ETSI's MEC Efforts 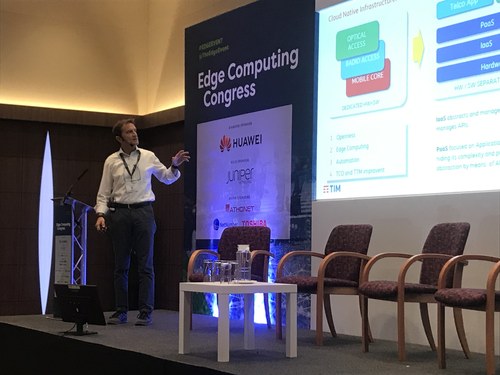 At least one other operator seems even less impressed. "We have looked at ETSI MEC but found it is a bit limited in terms of APIs," said Andrea Calvi, the head of technology evolution and innovation for Telecom Italia, during a panel session at the conference earlier in the week. "We are looking at an open source solution."

Alex Reznik, the enthusiastic head of ETSI's MEC group, insists there is no overlap between ETSI and the various open source initiatives that have popped up to address edge computing. "How does ETSI MEC compete with open source? We don't. We standardize what needs to be standardized. Open source gives you things that work. You need both," he said during the opening session on Wednesday morning.

Some executives may need more convincing.

komatineni 9/24/2019 | 8:06:21 PM
Expectations, reality Vendors will not invest heavily unless there is a clear market. Unfortunately, post LTE world has been a nightmare in terms of ROI, Biz case & Future clarity. So, the joint innovation, co-dev, or any other diff fancy names came to explore opportunities without investing heavily.

With ETSI big blunder of NFV, not many vendors are willing to go after ETSI. Opensource became another fad whereas the monetization of opensource is something beyond traditional network & application vendors. If the Customer doesn't buy a product, then where is the revenue coming from? Consulting, Integration or Support?? Then this becomes simple SI work which none are willing to.
Reply | Post Message | MESSAGES LIST | START A BOARD