MobiledgeX Seeks to Conquer the Network Edge, From Barcelona

Edge computing platform startup MobiledgeX has always been very aggressive about its plans and timeline -- it plans, and expects, to very quickly become the de facto underlying middleware technology that will enable applications to run on mobile operator edge computing assets globally .

And, to be fair, the fledgling company, which was spawned by German telco giant Deutsche Telekom little more than a year ago, has not been "all mouth and no trousers," as us coarse Brits would say: It's actually done quite a lot in the past 12 months and attracted the attention of a number of operators looking to pin down their edge computing strategies ahead of mass market 5G service availability.

But has it done enough?

Well, it's certainly still a frontrunner in the race to be the preferred edge enabler for telcos. As we have reported previously, getting in the door first at mobile operators with such edge computing functionality is going to be very important. And to do that you need supporters, reference deployments and some use cases, as well as functioning and trustworthy technology.

To its credit, MobiledgeX, fronted by CEO Jason Hoffman (for whom the term "carpe diem" appears to have been coined), has made progress on all of those fronts, according to a series of announcements made during the past few days: 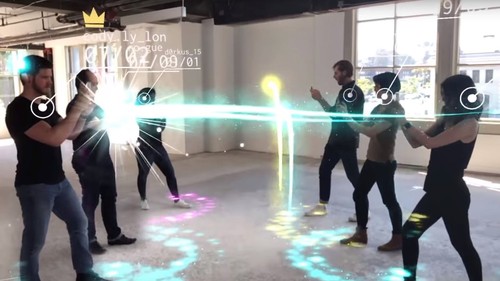 MobiledgeX, Deutsche Telekom, AR gaming specialist Niantic and Samsung will show what can be enabled by edge computing in terms of multi-gamer mixed reality applications on the DT stand at MWC19. (Source: Niantic)

Sunay Tripathi, CTO of MobiledgeX, tells Light Reading that "we're getting close" to agreements with other operators (for trials and collaborations) and that more developers, such as drone companies are "coming forward" to explore the potential of mobile operator edge connectivity.

With DT, there are six locations enabled in Germany with MobiledgeX software "and that will double this year," notes the CTO. "We're all ready for prime time," he boasts.

Being ready is one thing: Getting deployed in the networks of multiple operators is another. And that's the sticking point currently, as Tripathi admits. "I thought streaming containers was going to be the hardest thing to nail down but our biggest challenge is getting operators on board with the pace of development," he notes. "We can have a great meeting, agree a bunch of stuff, agree to do joint hacking of code, but then" it can be months before anything happens, which is frustrating, because they have the spectrum and resources and there are companies wanting to try out their applications on the networks.

The other well known and long-standing challenge is the fragmentation of the developer community. "There is a lot of work to be done getting our tools integrated with platforms" such as Unity, which is used by many developers in the gaming world.

So there's still lots to do but MobiledgeX is making progress and is hoping to attract further operator collaborators through its involvement with the Telecom Infra Project (TIP). "We want to get all the operators to work with us and not have to fund their own developments and [TIP] was a good way to try to do that," says Tripathi. (See TIP Forms New Edge Computing Unit.)

And that makes sense, of course, but there's still a lot of convincing to be done. The MobiledgeX team was hoping to have signed up a lot more public supporters by the start of the Barcelona show, but it might be MWC20 before it's clear whether the mobile operator community has bought into the DT/MobiledgeX edge vision.

For more on MobiledgeX, see: