Spinning off property assets has quickly become the latest craze among Europe's debt-burdened telcos. The usual gambit involves the towers that operators decorate with mobile network equipment. But Liberty Global  a relatively towers-light cable operator  is bidding adieu to its data centers instead.

More than 100 facilities in the UK, Ireland, Switzerland and Poland will be separated from Liberty Global and placed into a new business called AtlasEdge. That will be a joint venture with Digital Colony, an investment firm that already looks after a $32 billion portfolio of towers, data centers, fiber and small cell assets, but the exact terms of the AtlasEdge deal are unknown. 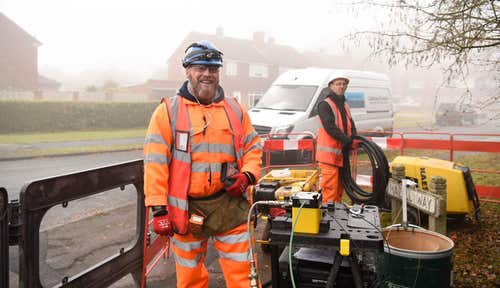 Laying cable  the unglamorous side of Liberty Global.

The big idea, then, is to rent AtlasEdge's facilities for the rollout of "edge" services, much as towers are rented by their owners to mobile service providers. This edge, essentially, is an extension of cloud computing designed to cut the distance between the data facility and the end user. Experts believe a shorter journey for data signals is necessary for more advanced applications.

So far, so good, and Liberty Global already has "anchor tenants" lined up in the shape of its various country subsidiaries  Virgin Media in the UK and Ireland, Sunrise-UPC in Switzerland and UPC in Poland. It has also appointed a boss for AtlasEdge with plenty of data center experience. Josh Joshi previously worked as the chief financial officer at Interxion, one of Europe's best-known data center providers.

As a possible fundraising exercise, this would carry obvious benefits for Liberty Global, one of the industry's worst-offending debt junkies. With about $28 billion in net debt on its books at the end of March, its borrowings were equal to about five times what it makes each year in basic earnings. Most of Europe's big telecom incumbents report ratios of between two and three.

Liberty says one goal is to "unlock" value and it has clearly been looking at towerco valuations in the European market. Cellnex, the region's biggest independent towerco, is currently worth 32.8 billion ($40.1 billion) despite reporting just 1.6 billion ($2 billion) in sales last year. To put that in perspective, Spain's Telefónica, with 43 billion ($52.6 billion) in annual revenues, has a market capitalization of only 22.8 billion ($27.9 billion).

Thin end of the edge

But the prospects for AtlasEdge could hinge on how much infrastructure is really needed to support new edge services. Right now, there is major disagreement. Incumbents such as BT and Telefónica have previously talked about using hundreds or even thousands of smaller nodes to cut journey times. Yet Vodafone, which is due to launch an edge service in partnership with AWS, believes only a few would be needed in a country of the UK's size.

On top of that, there are still hardly any examples of applications that require such low "latency," a measure of the journey time in milliseconds. On Vodafone's networks, signals usually take between 50 and 200 milliseconds to make a round trip, which is fast enough for the mainstream services that consumers and businesses enjoy. Cutting it to below 10 milliseconds, as Vodafone reckons it can do with AWS, might hold only niche appeal.

The balance of power at the edge between telcos and the public clouds is another possible disruptor for AtlasEdge. One trope is that AWS, Google Cloud and Microsoft Azure need to partner with operators mainly for access to physical telco assets. If so, there is no obvious reason why AtlasEdge could not serve public clouds directly. But if Vodafone is right, and only a few sites are needed in the UK for a sub-10-millisecond service, then lack of property is probably not the issue for any company worth more than $1 trillion. In partnering with Vodafone, AWS is possibly more interested in the UK operator's customer relationships and connectivity expertise.

For all the talk about edge networks, there is still very little evidence of a market for services. Yet Liberty Global has indicated that one of Joshi's main goals will be to extend AtlasEdge into other European markets, an activity that could demand substantial investments. Unless in-demand applications arrive soon, AtlasEdge risks losing its way.