The result, according to those advocates, would be much speedier Internet interactions. After all, computing requests could be immediately answered by a nearby edge data center  thus eliminating the time required to connect to a massive, farflung data center.

However, the financial analysts at MoffettNathanson argue that most edge computing services can be supplied by a relatively small number of regional data centers rather than hundreds or thousands of tiny data centers on the edge.

"We don't doubt that edge computing is a real trend," they wrote in a recent report to investors. "Instead, our suspicion is that most edge computing needs can likely be met with regional deployments in locations like traditional data centers rather than deployments at the base of a cell tower."

They continued: "Our view is largely informed by the speed of light."

The MoffettNathanson analysts wrote that fiber networks  which essentially transmit pulses of light through a cable  can theoretically transmit data 125 miles per millisecond.

"In real life, that sort of performance is not what a user would actually achieve," they noted. "Fiber isn't laid in straight lines and it needs to traverse network equipment, which adds some latency with each hop. Still, this makes the point: a deployment can be many miles away from an end user and still achieve extremely low latency."

As a result, they calculated that snappy connections, those with latency speeds of just a few milliseconds, can be supplied by locating data centers in most major US cities. "These dynamics suggest that most edge deployment needs can likely be satisfied with regional deployments in traditional data centers rather than deployments at the base of cell towers or other locations," they argued.

Indeed, that thinking appears to be at the heart of the edge computing strategies outlined by the likes of Verizon and Lumen Technologies.

For example, Verizon said it deployed ten public edge computing "zones" with Amazon Web Services (AWS) in 2020, and will deploy an additional 10 this year. That work, according to Verizon, will help it cash in on an edge computing market in the US that the company estimates to be worth $1 billion by 2022.

Similarly, Lumen already promises to provide 98% of all US businesses with latency speeds of less than 5 milliseconds. The company's edge computing deployment map shows that it's doing so with around two dozen sites spread across the country. 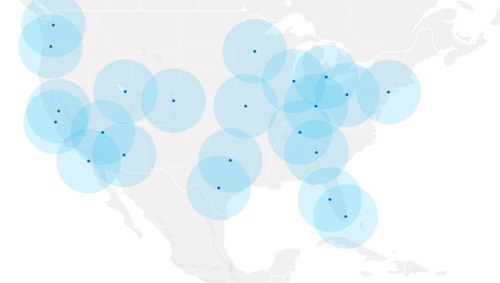 But the MoffettNathanson analysts argued that there's little reason to expect public edge computing sites to multiply in the same way that cell tower sites have. After all, there are already more than 200,000 cell towers in the US, according to most estimates.