There's plenty of talk about how edge computing could eventually change the very nature of the Internet's architecture by rerouting data traffic through smaller, local computing facilities instead of massive, far-flung data centers. Doing so, according to proponents, could give Internet services cat-like response times.

Already some massive telecom players have been investing in this opportunity. For example, AT&T and Verizon have begun lighting up public edge computing services with the likes of Microsoft and Amazon. Meantime, tower companies like SBA Communications have been purchasing data centers, while fiber providers like Lumen Technologies have been building out edge computing platforms with various partners such as IBM.

But perhaps the clearest insight into how network operators of the future might navigate the edge computing space comes from Rakuten, which is in the process of building a brand new 5G network in Japan. Unlike Verizon and Lumen, Rakuten isn't burdened with legacy operations that may not easily support new, software-powered operations. Rakuten is a so-called "greenfield" operator that is able to approach the issue via a clean slate.

So how is Rakuten addressing the edge computing space?

Rakuten currently counts around 11,000 mobile transmission sites spread across Japan, a number it eventually plans to expand to 44,000. Each one of those basestations contains radios that are controlled by one of around 3,000 nearby Rakuten edge computing facilities. Most of those edge computing operations consist of just one or two racks of computers, but Rakuten also counts 57 bigger regional data centers and three big, central data centers. 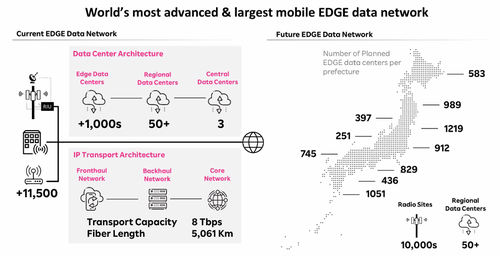 Rakuten outlined its edge computing network design in support of its 4G and 5G networks. Click here for a larger version of this image.
(Source: Rakuten)

Rakuten's network is designed to ensure the company's edge computing facilities are physically close enough to each of Rakuten's radios to control them without the potentially debilitating lag that would be caused by a more centrally controlled system.

Tareq Amin, Rakuten's mobile chief technology officer, said that all but a handful of Rakuten's fiber-connected edge computing sites are managed by third parties. "Cost was not actually expensive at all," he said, adding that the vast majority of the company's edge sites are unmanned.

Rakuten's Arvani said the company's first edge computing application is controlling its radios, but that's just the start. She said the company is also using its edge computing network to handle the content delivery chores of its Rakuten streaming TV service in Japan, one of the many digital services Rakuten offers across Japan and the world.

"Obviously we're starting with the CDN [content delivery network] application, but there's a lot more there. There's the IoT-type applications, the augmented reality, virtual reality  these are all things that people have talked about," Arvani said. "All kinds of things could fit in there."

Rakuten's Amin hinted that the company may begin opening its network up to enterprises and other developers to explore additional edge computing applications.

"Honestly, we need to partner with the right companies that would bring this distribution of how to use ultra low latency content to the user," Amin said during a recent media event.

But Rakuten isn't the only company building a greenfield 5G network with edge computing elements.

"I think that there are sections of the [network] build that will look very similar to Rakuten, but I'd also say that the geography in the US is very different than Japan," explained Dave Mayo, the executive in charge of physically constructing Dish's 5G network, in response to questions about Dish's edge computing plans. "And by geography, I really mean the population density. Because of the population density differences, the network won't look exactly like the Rakuten network. In places where we've got comparable density, I think it will look very similar."

However, as Mayo explained, that may not be necessary given the differences between the two companies in terms of geographic coverage, spectrum holdings and other variables.

"We may not, even in those high density areas, have as many data centers as Rakuten  only because, in my view, they may have deployed more data centers than they really need to, to get to a latency that's required today," Mayo told Light Reading. "Now, if you asked me five or seven years down the road, will the numbers that we have look the same as when we launched, I'd say no, it won't. We'll continue to grow that number over time."

Network operators, of course, are not the only ones pursuing the edge computing opportunity. Indeed, digital content delivery company Akamai has long touted its edge computing chops, and recently reorganized its media delivery, web performance and edge computing businesses into its new "Edge Technology Group."

Akamai has touted an edge computing network spanning 300,000 servers in over 4,000 locations, a network that's sold to media, gaming and other companies. According to a recent report from the financial analysts with Cowen, the company believes its total addressable market for edge computing and related services will grow to $18 billion by 2025.

And where will all that money come from? According to the Cowen analysts, the company's media and gaming customer vertical generated 45% of Akamai's edge computing revenues last year, followed by "high tech" at 18%, retail and commerce at 13%, financial services at 9% and travel and hospitality at 3%.

Importantly, Akamai said its Edge Technology Group generated $2.14 billion of revenue in 2020, roughly 67% of its total. It expects the division to grow at a 2-5% compound annual growth rate over the next three to five years.