T-Mobile is still selling a lot of smartphones, taking customers from other carriers and showing unprecedented growth.

The carrier's CEO, Mike Sievert, on the company's earnings call Tuesday, reiterated that the "5G smartphone is the first killer app of the 5G era."

Sievert explained that T-Mobile's customers are taking advantage of powerful smartphones, video streaming and T-Mobile's network and "using 35 gigabytes a month on average when pairing Magenta Max with a 5G smartphone."

T-Mobile's postpaid phone net customer additions were 673,000 in the third quarter and 2.1 million year-to-date; the carrier's quarterly smartphone adds landed right between AT&T and Verizon, its two US rivals, and a little above analysts' expectations.

Many worried that Verizon's and AT&T's positive postpaid phone news would mean that T-Mobile had somehow slumped in the quarter. Not so, said Sievert; he knows T-Mobile is in rarefied air and he told investors he won't sit on a lead.

"Listen, we have a once-in-a-decade opportunity to leap ahead and stay ahead of everyone else as customers embrace 5G," Sievert said. "We're years ahead on 5G, as you know, we're positioned to stay ahead. And we're, therefore, incented to get people on 5G so they can experience that advantage. Every time we upgrade a customer from 4G to 5G, we take them from a device that works similarly on all three big networks to a device that works way, way better at T-Mobile."

What do they think will happen next? More new accounts as customers switch carriers, according to T-Mobile CFO Peter Osvaldik. "We now expect total postpaid net additions to be between 5.1 million and 5.3 million, reflecting continued profitable growth and prudent share-taking opportunities from increased switching activity expected in Q4," the CFO said during the earnings call commentary. 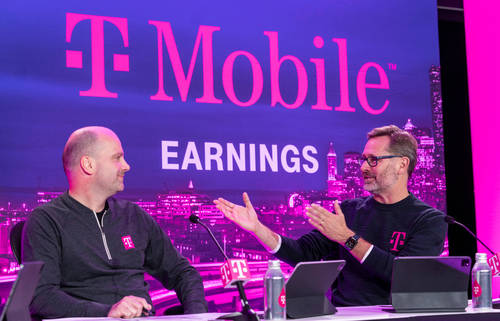 The cost of winning

In other earnings notes, T-Mobile said about 53% of Sprint customers have been fully transitioned to T-Mobile's network, and the telco is carrying 90% of Sprint's customer traffic. Its postpaid phone average revenue per user was down a few cents from the year-ago quarter  it slipped to $48.06 from $48.55.

Another remarkable number: T-Mobile's services revenues were reported at $14.7 billion in the quarter, up 4% from a year earlier. While it's hard to imagine there's room for upside in a country so smartphone saturated and price-sensitive to big mobile data bills, it is getting more expensive to move customers over and tempt them with shiny new phones.

T-Mobile's net income for the quarter was $691 million, down 45% from $1.3 billion in Q3 2020. Its diluted EPS was $0.55 in Q3, down from $1 a share in the year-ago period. The company blamed lower equipment revenues, higher equipment costs and higher sales costs for the lower earnings and profit numbers.

What hasn't been diluted is CEO Sievert's bullishness on 5G. "Here's a fun fact for you  over 75% of T-Mobile 5G customers are within our Ultra Capacity 5G coverage area that now reaches 190 million people, well over half the country is enjoying blazing fast speeds of around 10x faster than 4G," the exec said on the conference call. "Ask AT&T and Verizon what percentage of their customer bases are in the footprint of their fastest 5G."

The boasts were both focused and broad during the call, as the carrier's execs hinted at more market share shifts in the months ahead.

"T-Mobile is just beginning to enter a period where its network will be the industry's best," write the financial analysts at MoffetNathanson in a note to clients on Tuesday evening. "Their pricing is still the industry's lowest as well  The industry has never seen a competitor that combines both."