Smart Cities: Orange Sticks Its Neck Out on Transylvanian Testbed

To Romanians, the picturesque city of Alba Iulia in Transylvania is known mainly for its rich history, and as the place where Romania was signed into official existence at the end of the First World War.

But it is slowly gaining a reputation as a "smart city" where local authorities and technology companies are trialing connected services that could improve living conditions, reduce public sector costs and bring about long-term environmental benefits. 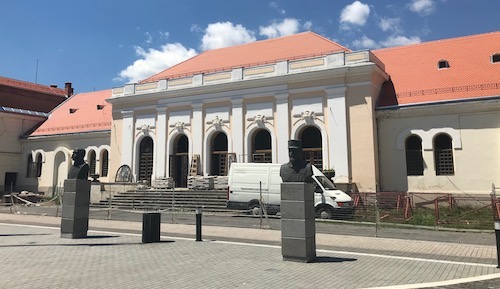 Currently under renovation, this building in Alba Iulia is where the union between Transylvania and the rest of Romania was officially proclaimed in 1918.

As Romania's biggest mobile operator, Orange Romania is playing a pivotal role in the smart city initiative. The stakes are potentially high. If Orange (NYSE: FTE) and its partners can prove in Alba Iulia that smart city services have economic and societal benefits, both the public and private sectors may be willing to pay for a full commercial offer. And successful trials might engender interest in other parts of Europe. With little prospect of a revenue increase from smartphone and broadband services, smart cities could provide the sales growth that operators crave. (See The Telecoms.com Podcast: It's Coming Home.)

When it comes to Alba Iulia, residents have clearly benefited from some public sector largesse at both the European and national government levels. Nicolaie Moldovan, Alba Iulia's city manager, says 85% of funds for the smart city trials came from the European Commission, with Romanian authorities stumping up most of the remainder. 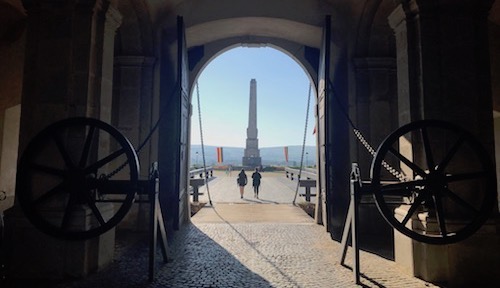 Part of the city wall that features elements of Alba Iulia's ancient and medieval history.

Could public sector money pay for smart city services after the trials have finished? "Of course," Moldovan told reporters during a recent press briefing in Alba Iulia. "If maintenance costs are low and if we have no incidents then we could buy them. But we don't know if this is exactly the right answer and that is why we want to test. There are 3,000 local administrations in Romania that could see what we have done and what works. This is the opportunity in the pilot."

So far, the results look encouraging. The use of smart lighting, whereby streetlights are dimmed when there is no one around, has reduced related energy consumption by 50-70%. Those figures provide some endorsement of LoRa, a non-cellular technology that relies on unlicensed spectrum to connect tracking and monitoring devices at low cost. Orange is using six LoRa gateways in Alba Iulia to support the smart lighting service. And in a sign of the boost that smart city projects may give to local entrepreneurs, a Romanian company called InteliLIGHT is providing the software platform for the smart lighting service. (See Ericsson Massively Ups Cellular IoT Forecast and Telco IoT in 2018: Firework or Flop?) 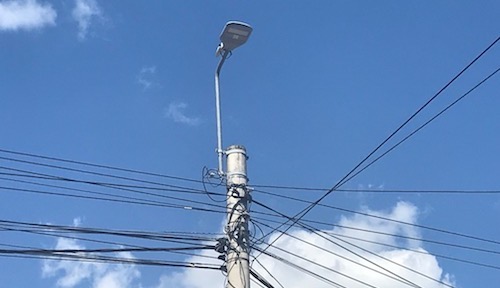 About 100 street lights now include LoRa modules so that lighting systems can be monitored in real time.

About 15 of Alba Iulia's 80 buses have also been kitted out with air-quality monitors, allowing authorities to detect if pollution levels in parts of the city are at unsafe levels. That application seems likely to have greater relevance in a congested metropolis like Bucharest, Romania's capital, than in the comparatively green Alba Iulia. But demonstrations have shown the technology works. The small boxes installed on buses can determine if carbon dioxide levels are above 25 milligrams per cubic meter, in contravention of European regulations. uRADMonitor, another Romanian company that develops the technology, says newer units will be able to measure levels of noise pollution, as well. 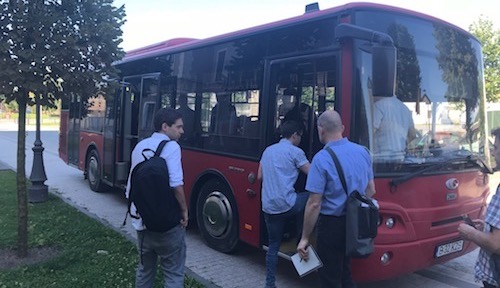 Reporters board one of the 15 buses in Alba Iulia that now feature air-quality monitors and WiFi technology.

Alba Iulia's residents are benefiting in more obvious ways, too. The 15 buses featuring air monitors provide WiFi access for passengers, with 4G used to connect the bus to the Orange network. Passengers can use WiFi for free after completing short surveys, giving authorities a way to gauge sentiment about smart city projects. So far, 11 surveys have generated a total of 9,000 responses. That looks impressive considering Alba Iulia had fewer than 64,000 residents in 2011, according to census data at the time.

Further engagement with residents has been made possible through the use of about 200 Bluetooth-enabled "beacons" dotted around the city. Once smartphone users have downloaded Alba Iulia's smart city app, they can receive information about local attractions or facilities from beacons in their immediate vicinity. 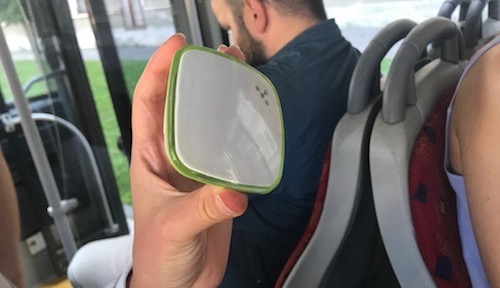 Using Bluetooth, these beacons transmit information about local attractions and facilities when a smartphone user is nearby.

Both local authorities and Orange have much bigger ambitions. Under the European Union's Horizon 2020 initiative, Orange is collaborating with other technology companies on a project called SliceNet, which aims to develop a framework for 5G network slicing and an app for consuming those slices. A spokesperson for Alba Iulia says there are plans for a smart city pilots based on 5G technology. (See Orange Ups 5G Broadband Stakes in Romania and Orange Romania Weighs Fixed 5G for Broadband Expansion.) 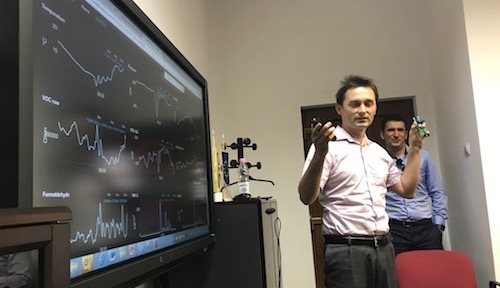 Radu Motisan, the founder of uRADMonitor, shows off his company's air-monitoring software in Alba Iulia.

From Orange's perspective, the main uncertainty is perhaps regarding the precise nature of its future smart city role. As a pure connectivity provider, Orange may see limited upside from smart city projects. The real opportunity could lie in becoming a systems integrator that coordinates the efforts of various smart city players. Yet telco diversification into IT services has rarely gone smoothly. Several analysts think traditional systems integrators like Accenture and Capgemini are better suited to this role.

In Alba Iulia, nevertheless, Orange has taken the systems integrator job on the pilot project, says Radu Milosoiu, an engineering manager at Orange Romania. That experience could prove invaluable as it figures out a smart city strategy for all of its European operations.