A lot of working in government is about making do with what you've got, which is why the private telecom sector rightly argues that it's much better suited to building out broadband networks than most local municipalities. Local governments just don't have a lot of resources.

On the other hand, sometimes cities have needs that telco and cable operators just aren't interested in meeting. When that's the case, it's amazing the resources that city leaders can muster to improve network infrastructure on their own.

In New Orleans, CIO Kimberly LaGrue is working on a plan to create a sustainable institutional broadband network that will support local city agencies (like police and fire departments), and also serve as a foundation for future smart city initiatives. LaGrue is concerned about digital equity (i.e., making sure everyone has access to new connected services), attracting new businesses to the region, building up a workforce that can support the city's technology needs and, of course, bringing in money, money, money. 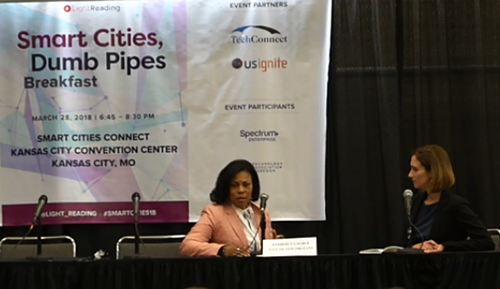 The funding issue is where things get interesting for New Orleans. The city applied for and won a $266,000 grant from the Delta Regional Authority last fall to help it upgrade the local network infrastructure. It's not a lot of money, but the funds will go toward working with a consultant to develop a long-term broadband plan as well as toward the deployment of a new four-mile stretch of fiber between the city's two data centers.

Ultimately, LaGrue is hoping New Orleans will be able to build more of its own municipal infrastructure, and she cites numerous strategies for making that possible.

For example, LaGrue's department may be able to tap into funding from other local agencies to support fiber deployments. The city's water department needs better connectivity to manage area flooding issues, and LaGrue envisions marrying that group's funding with her own team's expertise to get more fiber in the ground. There are also public sector agencies in the state of Louisiana that, LaGrue points out, manage fiber access to the region's colleges. She would like to partner with those groups to expand broadband capacity farther out when they look to extend or upgrade their own educational networks.

Separately, in the private sector, LaGrue is re-examining how New Orleans partners with commercial Internet service providers, particularly when it comes to renewing franchise agreements. An earlier broadband study showed that her city has valuable existing assets that ISPs would like to be able to use, including public land, buildings and streetlights.

"So our poles, our assets, the physical assets, bridges, all of those structures present opportunities," says LaGrue. And she suggests New Orleans and other cities should "leverage those things to get what we need, which is the [network] infrastructure."

Physical assets are growing increasingly important because telco providers need to install lots of new small cell equipment to be able to launch future 5G wireless services. It's an issue that's become fraught because ISPs complain about local permitting delays and costs hindering their rollouts, while cities argue they need to make sure that what operators deploy is in citizens' -- all citizens' -- best interest. (See Cities to FCC: Stop Undermining Us.)

For LaGrue, there is also the issue of making sure the local workforce can support new technology initiatives.

"We actually put some workforce initiatives behind this grant funding and we'd like to build a fiber utility academy so that as we build our network, we're actually training citizens to be a part of that infrastructure build," says LaGrue. "If we could turn them into telecom nerds, recruit them and create an operational base for our long-term fiber projects, or bring that into our economy as a workforce development tool, we're thinking that that could be a really valuable space for the city."

The bottom line for New Orleans is that the city is going to have to get creative as it seeks to improve its broadband foundation. But where necessary, LaGrue is convinced that her team can make change happen, both with and without commercial service providers as partners.

To see the full interview with CIO Kim LaGrue at Light Reading's Smart Cities, Dumb Pipes event, click on the video below.

[email protected] 4/10/2018 | 12:44:36 PM
New Orleans: What Better Place for a 5G Initiative? Mari, great article here and it highlihghts one of the best cities that I've seen for an impactful 5G initiative with both public and private needs, infrastructure, and resources to apply, plenty of heavy industry and tourism to support the effort, and the opportunithy for a great result. C'mon carriers! Pay attention to this.
Reply | Post Message | MESSAGES LIST | START A BOARD