Yago Tenorio runs a marathon in about three-and-a-half-hours. But when he found himself struggling in a Madrid heatwave last week, just a few kilometers from where he lives, his immediate thought was to phone home. It was "not funny," he recalls, when he realized the battery in his device was dead.

It explains why Tenorio, Vodafone's head of network architecture, is super-enthusiastic about "battery life," a network feature designed to conserve device power. While users can already twiddle phone settings to prolong battery life, the network accounts for as much as 70% of power consumption (according to Tenorio) and lies outside the customer's control. Thanks to a new application programming interface (API), developed by Vodafone's software team and made available to phone manufacturers, network performance could be temporarily sacrificed for a battery boost. Tenorio could have exchanged running torture for a seat in an air-conditioned car.

Battery life is just one of several new software innovations that could form part of Vodafone's future "network-as-a-platform" offer. A "low-latency" API, developed in partnership with unidentified Internet companies, could route data traffic more optimally to minimize jitter, a variable lag that infuriates serious real-time gamers. "When you apply this low-latency treatment, the results are fantastic," said Tenorio at a press event this week. "It kills jitter." 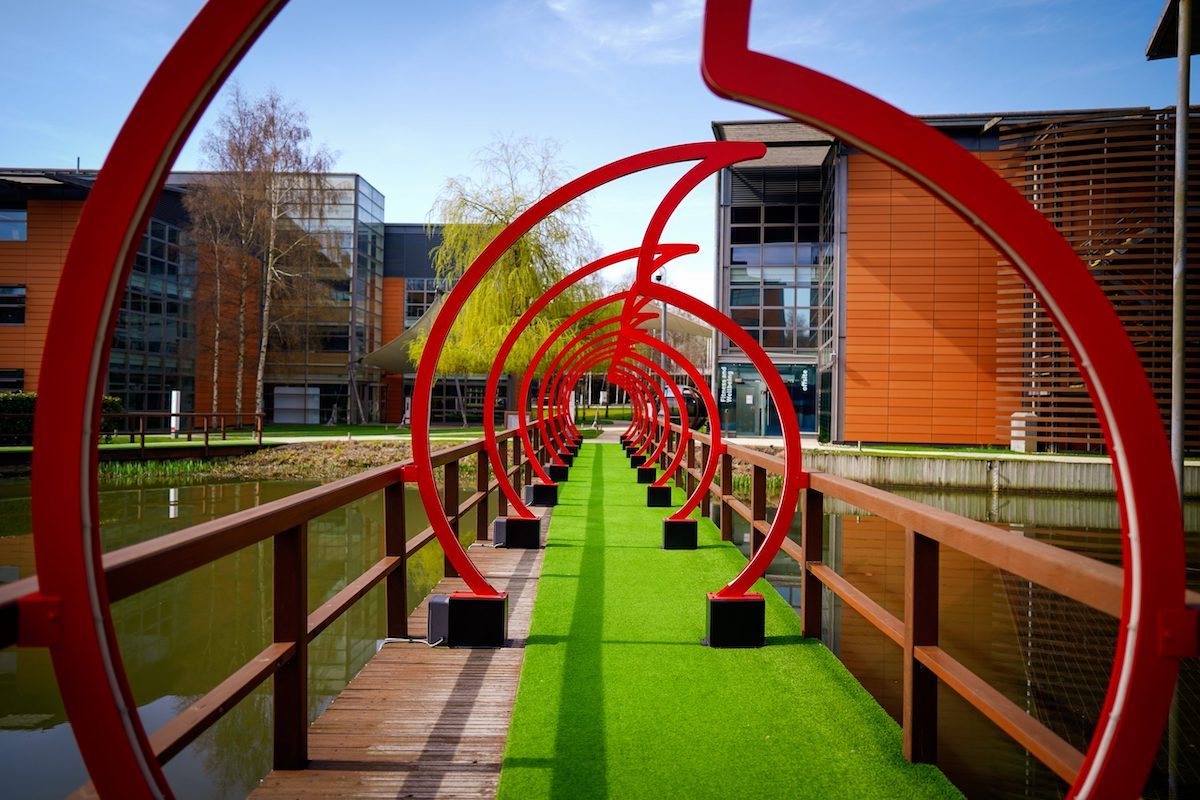 Vodafone's headquarters in the UK town of Newbury.
(Source: Vodafone)

Other APIs to emerge from the Vodafone stable include one for managing customer premises equipment (soft launched in Germany), a "caller ID" feature to verify the identity of unknown callers (an Uber driver, say) and a "dynamic bandwidth" API that would let parents exercise control over a child's Internet service. This year, Vodafone also plans to launch a "scam calls" service that would alert a customer's bank if he or she receives a suspicious call.

This wave of potential software goodies is approaching while Vodafone tries to reinvent itself as part software player. Until late 2021, Vodafone employed about 9,000 software engineers across a total workforce of almost 97,000 people. But under a plan unveiled in October 2021, it wants to add another 7,000 over the next few years.

A marathon not a sprint

The initiative partly reflects the growing importance of software in the networks business. By 2030, Vodafone aims to run 30% of its European mobile network on virtualized technology, where general-purpose equipment is commonplace, new interfaces allow vendors to be more easily combined and the most value is in the code. Rather than rely on external systems integrators to piece all this together, Vodafone wants the control a beefed-up software team should bring.

In relation to that, it also wants to ensure it is not heavily dependent on any technology partner. As an example, a new telecom-as-a-service (TaaS) platform developed and maintained by its software team could function as an abstraction layer between Vodafone and a public cloud. Other companies have recently complained about cloud "lock-in" and a lack of redundancy. With TaaS, Vodafone claims it will be able to port workloads if required.

"When we had the iPhone launch in the UK, this was a very high sales time," said Ahmed El-Sayed, Vodafone's director of digital engineering for Europe. "In the old days, you would have had to provision ten times your hardware to be ready just for one day and the capacity is then wasted. What we have done now is have automatic scaling. When customers are buying more iPhones, the system automatically scales out in AWS and can go to Microsoft or Google if needed. When a peak has passed, the system scales down again."

Since the software plan was announced, Vodafone has gained 1,400 engineers for a total of 10,400 today, according to Johan Wibergh, the operator's chief technology officer. By March next year, he expects to have added 2,500 altogether and be more than a third of the way to reaching his target.

What's unclear is the precise split between external recruitment and internal retraining as the components of this increase. Vodafone has previously said it expects most of the additions to come from its existing workforce and that overall headcount is likely to go up, despite automation.

"We are insourcing a lot of activities," said Wibergh when asked if Vodafone would need fewer employees in future. "Every time we insource, we have it about 20% cheaper. We are recruiting and hiring instead, because an overall way to get cost efficiency is to buy less from external companies. Maybe we can do some automation and there is less need for people and in some areas maybe there is natural attrition."

The insourcing means about 15% to 20% of software engineering time is spent on core engineering, according to El-Sayed, rather than on developing entirely new features. Vodafone has also realized savings through regional consolidation of its resources. Instead of building the same technology again and again for each European country, engineers develop it once for deployment everywhere.

Talent wars and other worries

But the transformation looks fraught with risk. For one thing, software engineers do not come cheap, especially in the US. "The US is the worst to hire in – salaries are higher," said Wibergh. "We also recruit in European countries, and it is a tight labor market." According to the US Bureau of Labor Statistics, software employees currently earn between $98,000 and $121,000 annually, while salaries for listed telecom occupations range from about $47,000 to $62,000. The shortage of talent means lots of companies are chasing a relatively small number of skilled workers – good for them, bad for the likes of Vodafone.

As Vodafone equips its existing workforce with sought-after skills, its labor costs are likely to rise. Assuming total headcount remains stable, the percentage of staff who work on software would rise from 9% to 16% under Vodafone's plan. Labor costs in Vodafone's last fiscal year accounted for about 13% of total expenses above the operating profit line. Per employee, they were up just 3%. In an inflationary market, a more substantial increase could be uncomfortable.

None of this would be such a concern with decent sales growth. Last year, group revenues grew just 4%, to nearly 45.6 billion ($47.4 billion) – a meager rate of increase next to the levels reported by the software giants that telcos envy. The dream is to "monetize" the kind of software innovation that would prevent the in-motion Tenorio from overheating and stop gamers from raging about slow connections. Could Vodafone charge an Internet company for that low-latency feature? "The services provide value and that is an excellent way to start a conversation," was all Tenorio would say.

Complicated rules about net neutrality are perhaps the main obstacle. In parts of the world, operators are prohibited from charging Internet companies for preferential treatment. "It is not detrimental to anyone else," said Tenorio about the low-latency feature, pointing out that most services would not require it. But convincing authorities may be tricky.

Vodafone probably deserves applause for a strategic move that looks both original and bold. It appears to have made decent progress since the plan was first announced and is not oblivious to the risks. But the real measure of success will be the future return on investment. "Software is eating the world," said Wibergh, and not for the first time. His job is to make sure Vodafone is not one of the victims.