After tacking on another 603,000 wireless lines in the fourth quarter of 2019 and about 1.9 million over the past year, US cable's base of mobile subscribers has risen past 3.2 million.

The 603,000 lines added in Q4 comprised 261,000 lines from Comcast (Xfinity Mobile), 288,000 from Charter Communications (Spectrum Mobile) and 54,000 from Altice USA, which launched Altice Mobile in September. Total mobile line additions by US cable operators in Q4 were more than double the 1.36 million added in the year-ago quarter. 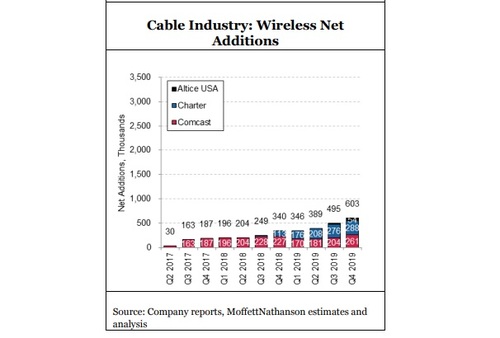 US cable operators are "now by far the most important" mobile resellers, at least in terms of their marginal impact on the market, Craig Moffett, analyst with MoffettNathanson, explained in a new report sizing up the mobile sector. 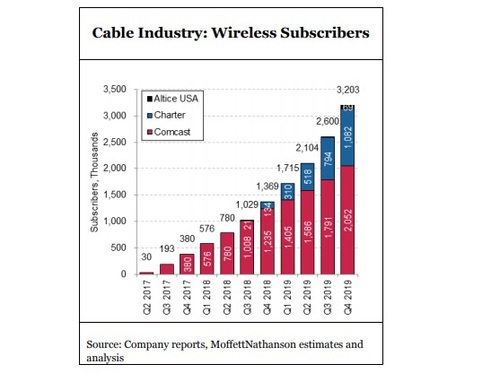 Comcast introduced Xfinity Mobile in May 2017 and Charter went wide with Spectrum Mobile in September 2018. Altice USA's "impact is still just beginning to be felt," and its MVNO offering is poised to run on a much better network following the still-pending T-Mobile/Sprint merger, the analyst added. Charter, meanwhile, recently opened access to Verizon's 5G network for no added cost to customers on Spectrum Mobile unlimited plans.

Moffett said the increased competitive intensity and the use of richer promotions are beginning to weigh on the margins of mobile service incumbents such as AT&T and Verizon. That situation will only worsen as T-Mobile takes steps to reduce Sprint's churn rate and as cable operators take a larger share of industry growth, he added. 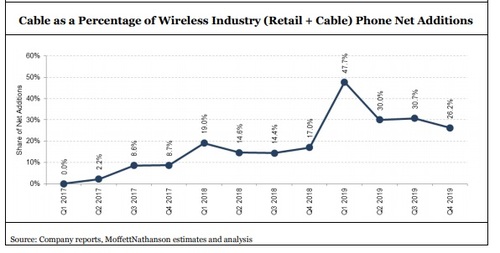 "For Verizon and AT&T, the going is likely to get tougher when the [T-Mobile/Sprint] deal closes," Moffett wrote. "The competitive dynamics discussed in this report suggest increased pressure on Verizon's and AT&T's wireless businesses, with net subscription growth, margins, and capital intensity all potentially being negatively affected."