Amazon to snap up Eero, claw into whole-home Wi-Fi market

Adding another weapon to wield against Google in the smart home arena, Amazon announced Monday that it has a deal to acquire eero, a startup that has developed a mesh-based whole-home WiFi platform.

Founded in 2014, Eero cut its teeth in the retail sector, but has made some strides selling its software and products to cable operators and other service providers, including Rogers Communications Inc. (Toronto: RCI), WideOpenWest Holdings LLC (WOW) , Sonic.net Inc. and BlueRidge Communications. (See Sonic Picks Eero for Whole-Home WiFi , WOW Tackles WiFi Troubles and Why ISPs Are High on Whole-Home WiFi.) 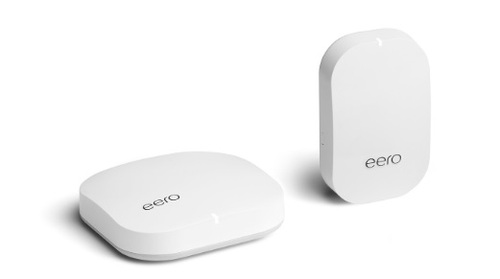 The eero hub (left) and eero Beacon. Amazon said eero products have a 4.6-star product rating with the online retailer.

eero's product lineup includes a central hub that, the company claims, can bathe an area of up to 1,500 square feet in WiFi, a smaller Beacon WiFi extender and software that uses in-home data and a cloud-based platform designed to help optimize the customer's WiFi network. eero Plus is a subscription-based security offering that keeps tabs on cyber threats and includes an ad-blocker.

"We have a shared vision that the smart home experience can get even easier, and we're committed to continue innovating on behalf of customers," Dave Limp, SVP of Amazon Devices and Services, said in the release announcing the eero deal.

"Most ISPs have not adequately addressed the problem so consumers are now plopping down more cash for systems that can cost from $250 - $350," he added.

Citing Parks Associates data, Russell noted that 11% of US broadband households currently own a whole home mesh networking system, while and another 22% have purchased lower-cost WiFi extenders that don't generally solve the coverage or congestion problems.

He said Amazon's acquisition of eero will give it "critical infrastructure for the connected home," and suspects that eero's roadmap involved adjacent areas that play into home automation services and cybersecurity (the latter is already being addressed partly with the eero Plus offering).

Amazon did not announce what it is paying for eero, which has raised about $90 million, according to Crunchbase.

Amazon (via the Alexa Fund) was also a backer of Luma, a WiFi company that was acquired last year by First Alert.

The acquisition comes about a year after eero laid off about 30 employees or 20% of its workforce. At the time, eero said it had eliminated an unannounced product so it could focus on its "core business" of home WiFi.