Telcos are taking back control, as a Brexiteer might say. Upset that a few unelected equipment vendors in Europe and China dictate the rules of the technology game, they are voting for change. Groups like ONAP, the Telecom Infra Project and the recently formed Open RAN Alliance (ORAN Alliance) are proof the R&D balance of power is shifting back toward the operators.

"In the past all of the innovation was done by operators. Then it was given to the vendors. Now it is coming back a bit," said Bruno Jacobfeuerborn, the CEO of Deutsche Telekom's towers subsidiary and the German incumbent's former chief technology officer, during a conversation with Light Reading about the ORAN Alliance at this year's Mobile World Congress. (See Major Telcos Pool Efforts to Slash 5G RAN Costs.)

Except the numbers do not really support this analysis. An investigation by Light Reading shows that research and development expenses for US-based AT&T Inc. (NYSE: T) and five of Europe's biggest operators (see below) have fallen as a percentage of revenues in the last five years, and equaled less than 1% of sales last year (while Light Reading also examined Verizon and Vodafone, neither indicates R&D spending in its annual reports). In many cases, the actual level of spending has also dropped since 2013.

By contrast, Ericsson AB (Nasdaq: ERIC), Huawei Technologies Co. Ltd. and Nokia Corp. (NYSE: NOK), the world's three largest equipment vendors, have each increased R&D spending as a percentage of sales. In 2017, they collectively spent 16.7% of their sales on R&D, up from 14.8% in 2013. Telcos also come off badly when compared with the Internet giants, whose investments are obviously spread across a more diverse range of activities. Google (Nasdaq: GOOG) spent 15% of its revenues on R&D last year, up from 12.9% in 2013. R&D spending at Facebook edged up from 18% to 19.1% of revenues over the same period.

The telco figures may come as a surprise given much of the current rhetoric and observable trends. Complaints that vendors are not developing the products their customers need have grown louder in the last few years. Network functions virtualization has attracted interest partly as a way for telcos to sever their ties with the giant vendors and take a more active role in technology development. Telcos have been cultivating network startups as potential alternatives to the main kit vendors. Some of the largest profess to be developing technologies as vendors would normally do. During Light Reading's Big Communications Event in May, John Donovan, the CEO of AT&T Communications, said AT&T was becoming more like an "architect" and building the products it needs. (See AT&T's Donovan: Resistance to Change Is Futile , NFV Is Down but Not Out and Orange, VCs Commit $113M to Network Startups as 'Black Box' Frustration Mounts.)

All of this would seem to imply a bigger R&D commitment from telcos. Yet five operators in the study invested a smaller percentage of revenues in R&D expenses last year than in 2013, with Telecom Italia (TIM) investing the same amount (just 0.2%). Even AT&T has been on a downward trajectory. Its actual spending peaked in 2014 at $1.73 billion, or about 1.3% of revenues. Last year's figure was roughly $1.5 billion, or less than 1% of sales. Just as quitting the European Union seems unlikely to give the UK the control Brexiteers crave, so the latest telco rebellion does not look to be tipping the R&D scales in favor of the telcos.

Telco R&D Spending as % of Sales 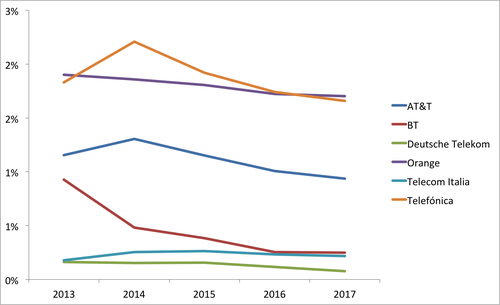 Unless telcos morph into vendors, they will probably never invest a bigger chunk of revenues in R&D than Ericsson, Huawei or Nokia. But any neutral observer may have expected recent developments to fuel at least some increase in telcos' R&D spending. One possibility is that open source code has given telcos a relatively low-cost means of developing new technologies. AT&T, clearly, has thrown its considerable weight behind open source groups such as the Linux Foundation and plans to make heavier use of open source code in its networks. In some cases, telcos are also counting on startups for innovation. France's Orange (NYSE: FTE) or Germany's Deutsche Telekom AG (NYSE: DT) may feel there is more to gain from injecting a few million euros into a small software company than from coughing up tens or hundreds of millions for in-house R&D.

When operators talk about driving innovation, some chicanery might also be involved. With little immediate prospect of substantive revenue growth, many telcos may have less interest in shouldering a bigger R&D burden than in ratcheting up the pressure on their traditional suppliers. As a club that now features the world's largest service providers, the ORAN Alliance, whose goal is to spur the development of more open technologies in the radio access network, is almost impossible for the mainstream vendors to ignore. Nokia is already a member of the xRAN Forum, whose merger with China's C-RAN Alliance brought the ORAN Alliance into existence. Gabriel Brown, a principal analyst with Heavy Reading, expects Ericsson to join the ORAN Alliance in due course. (See Why Resistance to the Open RAN May Crumble.)

Next page: Dumb pipe or innovator?

Phil_Britt 7/23/2018 | 3:43:47 PM
Re: Superior work When companies cut R&D, they often do so at their own peril. Granted, R&D spending might have been too high initially, running too far ahead of revenues. But too often R&D cuts help quarterly profits, but hurt companies in the long term.
Reply | Post Message | MESSAGES LIST | START A BOARD

I think these numbers are much higher than in the past for the Telcos.  Think about how many software engineers that say Google has - 10,000?  How many services are directly developed by Amazon.  Telcos depend on vendors to spend lots of R&D $$.  For the last 15 years, the large Comm Service Providers have been shoving down pricing on Equipment vendors leaving little $$ for return on that investment.  And they wonder why nothing happens to help them do something super new.

kq4ym 7/22/2018 | 7:34:23 AM
Re: Superior work If the numbers are correct it could also just be a blip in the scenario or maybe telcos don't completely believe increasing R&D will be a major factor in increasing profits and maybe there's some unknown yet change in the business plans or those folks where it's not going to be all the important for put more in R&D?
Reply | Post Message | MESSAGES LIST | START A BOARD