As several major US service providers prepare to reveal Q4 2020 results this week, analysts at ISI Evercore expect them to pull in another solid quarter of broadband subscriber gains even as the pay-TV pie continues to crumble.

US service providers are expected to tack on another 1.1 million broadband subscribers and lose about 748,000 pay-TV subs in Q4, ISI Evercore predicted in its quarterly preview issued Sunday. 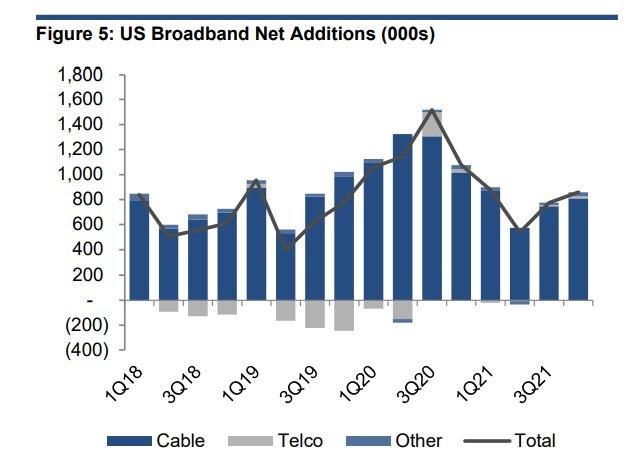 While the expected Q4 2020 broadband adds will handily beat the 780,000 additions from Q4 2019, they'll definitely mark a slowdown from the 1.5 million broadband subs raked in for Q3 2020 as the pandemic-fueled surge tapers off, the analysts noted.

Evercore ISI also expects cable to capture the lion's share of broadband sub growth, with net adds of 1.01 million, or a share of about 95% of all net additions for Q4. Telcos are expected to add 24,000 broadband subs in Q4, reversing a loss of 244,000 subs a year earlier.

ISI Evercore estimates that traditional pay-TV service providers lost 1.4 million subs in Q4 2020, narrowed slightly from a loss of 1.6 million a year earlier. With anticipated subscriber adds of 640,000 among virtual multichannel video programming distributors (vMVPDs), the total US pay-TV market is expected to shed about 748,000 subs in the period. 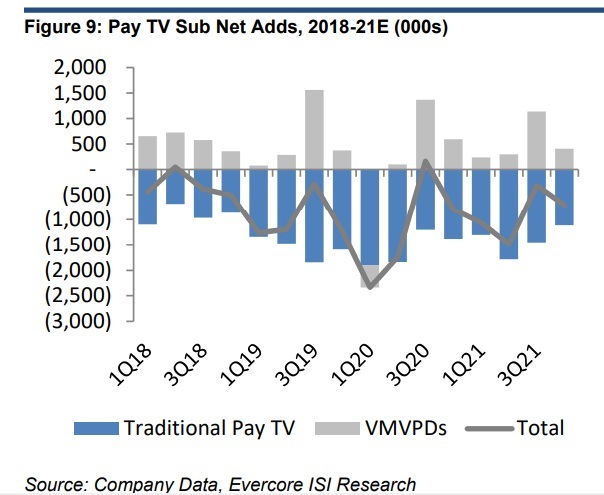 US cable operators are expected to shed 662,000 video subs in Q4 2020, widened from a year-ago loss of 437,000. Charter Communications is expected to lose 150,000 pay-TV subs in the quarter, reversing recent quarterly gains attributed to exceptionally strong broadband subscriber additions that included pull-throughs from broadband subs adding pay-TV to the service bundle.

"We see no evidence that the decline of the big bundle is abating, but also little evidence that it's accelerating dramatically, as a significant portion of the subscriber base values the news and (particularly) sports content that is very difficult to obtain outside of the traditional pay TV bundle," the analysts wrote.