Rakuten takes aim at VMware, and it's not the only threat

Robin of medieval-archery, proto-Marxist fame gained notoriety by filching from the filthy rich and redistributing wealth to the plebs. Skip a few hundred years and the tech company of the same name is hinting at a similar shake-up. Under the protection of Japan's Rakuten, its owner since early 2022, Robin.io could effectively ransack the P&L statements of its multi-billion-dollar rivals. Its go-to-market strategy, said Rakuten's Tareq Amin, "is to offer any customer 50% less than what they pay today."

The half-price figure is based on Rakuten's comparison of Robin.io with an OpenStack platform provided by Cisco and Red Hat, a subsidiary of IBM that evangelizes about open source and made an estimated $5.6 billion in sales from it last year alone. Currently used by Rakuten Mobile (Rakuten's domestic telecom unit), that OpenStack platform is on death row, deemed relatively inefficient by Amin. By March next year, Rakuten aims to have ported all its 4G workloads to Symcloud, an alternative that Robin.io underpins.

But the company most imperiled by Robin.io and other cloud-computing upstarts is probably VMware. Spun off from Dell in November last year, VMware is being stalked by Broadcom, a semiconductor giant that offered $61 billion for it in May. As regulators mull the implications, VMware investors, employees and customers fear Broadcom will mess up the formula. Its track record on takeovers of software companies is marked by layoffs and R&D cutbacks, say critics. Speculation alone could prompt customers to look elsewhere.

Cue a dramatic entrance by Rakuten and Robin.io. "Robin.io was always a good alternative to VMware," said Geoff Hollingworth, the chief marketing officer of Rakuten Symphony (the vendor part of Rakuten), in a LinkedIn post this week. "Now it is even better. As part of Rakuten Symphony, capabilities will only grow to ensure it continues to be the application-centric platform of choice – in the cloud and at the edge."

His pitch comes several weeks after S&P Global Market Intelligence weighed in with an especially gloomy assessment of Broadcom's VMware bid. The two companies lack "obvious and immediate synergies," said S&P's John Abbott in a research update. "We argued that it could slow innovation at VMware just at a point when emerging cloud-native software stacks were in danger of making its traditional virtualization platform less compelling than it once was," he wrote.

Worse, among customers of Broadcom and/or VMware that S&P surveyed, some 56% said they felt negatively about the deal. The chief worries were that innovation would suffer, synergies would be elusive and software licensing terms might become less favorable. VMware's share price is down 14% since the deal was announced in late May. It has dropped 44% from its high point in April 2019.

Going out of fashion

There is arguably a mustiness about VMware that competitors are eager to exploit. The name – an abbreviation of Virtual Machine Software – does it no favors while the industry gushes about containers, microservices and cloud-native architecture. Virtual machines are increasingly viewed as yesterday's tech.

VMware cannot be accused of standing still. Its Tanzu portfolio is based on Kubernetes, an open-source platform for managing containers. But it was not introduced until mid-2019, long after containers first became fashionable. There can be little doubt that VMware derived much of last year's $12.8 billion in revenues from customers on older technologies more vulnerable to competition.

VMware acknowledged that "adoption of distributed micro-service application architectures, and their alignment with container technologies, represents an emerging area of competition" in last year's annual filing with the Securities and Exchange Commission. Generating $3.1 billion of its revenues from licensing, it is also warier than others of open source, which has "the potential to erode our profitability," it said.

In telecom, VMware shows up most prominently in the network of Dish Network, a satellite company now positioning itself as the fourth national mobile operator in the US. VMware appears to be there partly to ensure Dish is not overly reliant on AWS, the public cloud hosting most of Dish's workloads. Baseband software supplied by Mavenir also sits on VMware's platform.

But a low-cost, Kubernetes-armed Robin.io is a danger to VMware in this sector thanks to Rakuten's various capabilities. Among other things, Rakuten is working to run Altiostar, its own baseband software supplier (which it bought last year), on Robin.io. "The eNodeB and gNodeB service offering from Rakuten Symphony is fully containerized and will be operationalized in the Rakuten Mobile network on its cloud platform," said a spokesperson in response to questions, using technical terms for basestation functions. "It is already operational under the first official application and will be fully migrated during 2023."

Robin.io is not the only telecom challenger to VMware or, indeed, Red Hat. Formerly part of Intel, Wind River spent several years under the ownership of TPG Capital, a private equity firm, before it was bought for about $4.3 billion in January by Aptiv, a developer of automotive technology (the deal has not yet closed). Despite the identity of its new parent, Wind River claims to be more intensely focused on telecom than its big rivals are.

"The majority of their revenue comes from IT enterprise, back-office-type spaces," said Paul Miller, Wind River's chief technology officer. "We do none of that. Wind River produces very high-performance software for mission-critical systems. Telecom is a perfect fit for our DNA."

Unlike VMware and Red Hat, Wind River – which makes about $400 million in annual revenues – is not trying to compete against the public clouds in areas like content delivery and gaming, says Miller. Instead, it has concentrated its R&D on what he calls the "far edge" of the access network, making it a more "synergistic" partner than either VMware or Red Hat for a hyperscaler, he insists.

"Hyperscalers are not yet able to go to the far edge and host a real-time radio application," said Miller. "We can partner and create a joint solution from the core to the far edge and orchestrate that across the entire infrastructure and not have a competitive problem, unlike VMware and Red Hat, which are directly competing for private cloud deployments."

Wind River, accordingly, boasts the ability to consume half as many "cores" (lingo for the semiconductor processing unit) as any competitor would do, even with a higher density of cells sites to distributed units (where baseband processing takes place). All that should translate into lower operating costs for a network. Miller's firm beat rivals to land the contract for Vodafone's 2,500-site rollout of a virtualized radio access network in the UK. Wind River also has "thousands of sites carrying production traffic" in Verizon's network, said Miller.

Revenues in last fiscal year ($B) 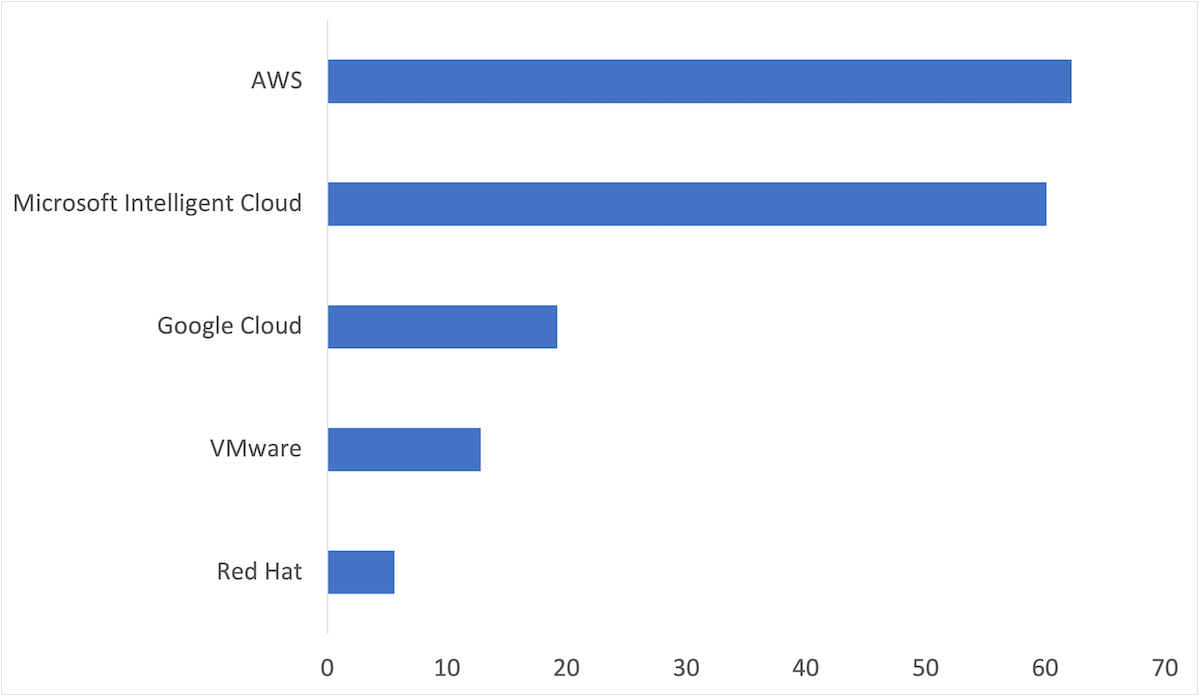 The emergence of specialists like Robin.io and Wind River must trouble VMware and Red Hat. Big Tech is also on the march, attacking the more generic cloud-computing opportunity. Last year, AWS and Google Cloud grew their revenues by 39%, to an astonishing $81.4 billion. The comparable growth rate at Red Hat and VMware was just 12%, lifting sales to an estimated $18.4 billion. Container-wielding specialists on one side and public clouds on the other could form a crushing pincer movement.

Operators including Dish have previously positioned VMware as a kind of abstraction layer, allowing workloads to be moved between clouds and minimizing dependency. But the argument is full of holes. Having a multi-cloud strategy means giving up some of the features and benefits that come with monogamy, according to some experts. Even if that is claptrap, a third-party abstraction layer is just an alternative choke point.

Vodafone prefers to build its own. "This will act as a layer on top of all hyperscalers, whether AWS or Google or Microsoft," said Ahmed El-Sayed, Vodafone's director of digital engineering for Europe. The telecom-as-a-service (TaaS) layer, as he calls it, forms part of the operator's plan to add software expertise by recruiting another 7,000 software engineers (it employed 9,000 last year). As risky and costly as that initiative seems, it leaves Vodafone with less need for the middlemen.