The coronavirus pandemic continues to drive up usage of all manner of home-office products as remote working remains a necessary part of measures to slow the spread of COVID-19.

Software that allows employees to communicate with colleagues wherever they are has become an essential tool, and subscriber numbers have certainly been rising as a reflection of this trend.

For example, Satya Nadella, the CEO of Microsoft, said last week that Microsoft Teams now has more than 145 million daily active users  almost double the number a year ago. 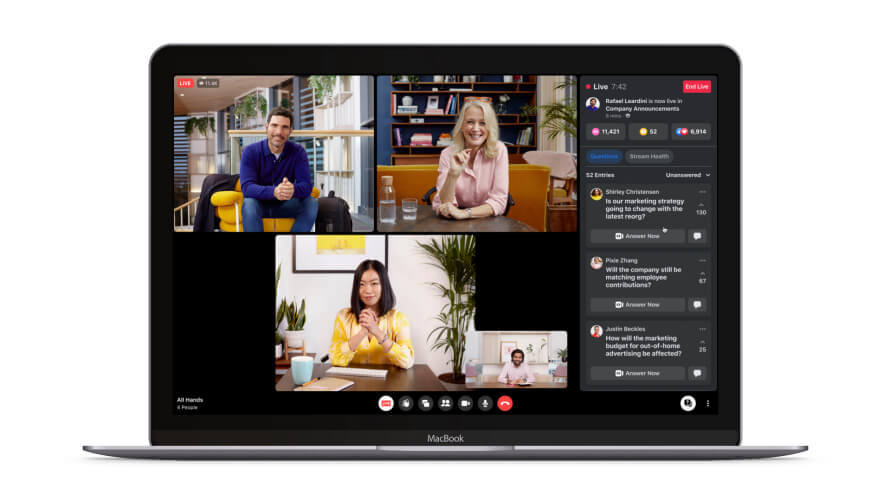 Going live: Workplace is pushing video heavily  whether as conference calls or as live events on the platform.
(Source: Facebook)

Nadella also noted that in markets where employees have returned to the workplace, including Australia, China, New Zealand, South Korea and Taiwan, "we have seen usage continue to grow."

Cisco reported in March that its Webex collaboration platform has over 600 million monthly participants and connects six billion calls every month. Furthermore, Slack Technologies said its chat platform had 156,000 paid customers at the end of January, up 42% year-on-year.

Facebook, known more for its consumer-facing services and applications, launched Workplace by Facebook in 2016 in a bid to break into the enterprise collaboration market. Formerly known as Facebook at Work, the service was used by just 1,000 organizations at launch.

Five years later, Workplace has reached 7 million paid subscribers  an increase of over 40% in the past year. Although still a drop in the ocean compared to the likes of Teams, it represents an "interesting milestone," in the words of Facebook CEO Mark Zuckerberg.

"We built Workplace as an internal version of Facebook to run our own company, and it was so useful we started letting other organizations use it too, including everyone from Spotify to Starbucks to the World Health Organization. More companies are starting to use our virtual reality tools for work as well, and I'm excited to build more new ways for people to work together that weren't possible before," Zuckerberg said on Facebook.

CNBC noted that Workplace falls under Facebook's "other" revenue, which increased by 146% to $732 million in Q1 2021 and accounts for almost 3% of total revenue. Sales of Oculus virtual reality headsets and Portal video-chatting devices are also said to be included here.

The social network recently introduced some new communications features and has even teamed up with Cisco to offer joint Workplace and Webex products. It also got rid of its free product, Workplace Essential, from February 10, 2021.

"As businesses continue to evolve to new working practices and hybrid workforces we'll be doubling down on productivity and collaboration, as well as expanding our reach in our current areas of strength. Next year you'll see us focus on remote presence, employee wellbeing, Live video and empowering SMBs to connect their organizations."