Cloud, software and systems provider Calix ended Q4 2021 on a positive note, despite ongoing supply chain constraints that the company expects may hinder the pace of its growth this year.

For the quarter ending December 2021, Calix reported revenue of $176.4 million, a 3.7% increase year-over-year, according to company earnings reported on Thursday morning.

That revenue is coming primarily from small customers, representing 84% of Calix's business. Medium-sized businesses took up 8% of total revenue in the fourth quarter of 2021, an increase from 5% (or 47% in absolute dollars), compared to Q4 2020, which CEO Carl Russo said in a letter to stockholders reflected program ramps with new customers and a shift in how several customers are classified.

Large customers represented 8% of Calix's revenue, down from 10% a year ago "primarily due to lower shipments to Verizon," said Russo.

Notably, Russo said on a call with investors, 2021 was the first year that Calix did not have one customer representing greater than 10% of revenue on an annual basis. "We expect this trend to a more linear revenue model to continue," he said. 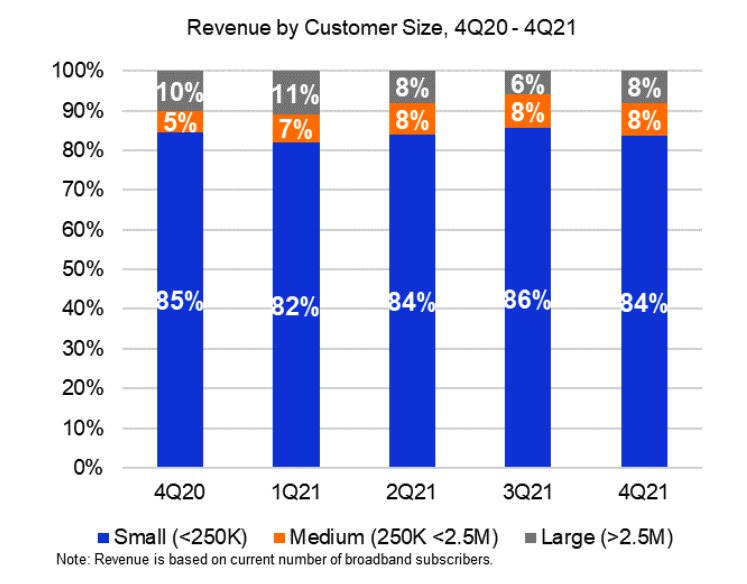 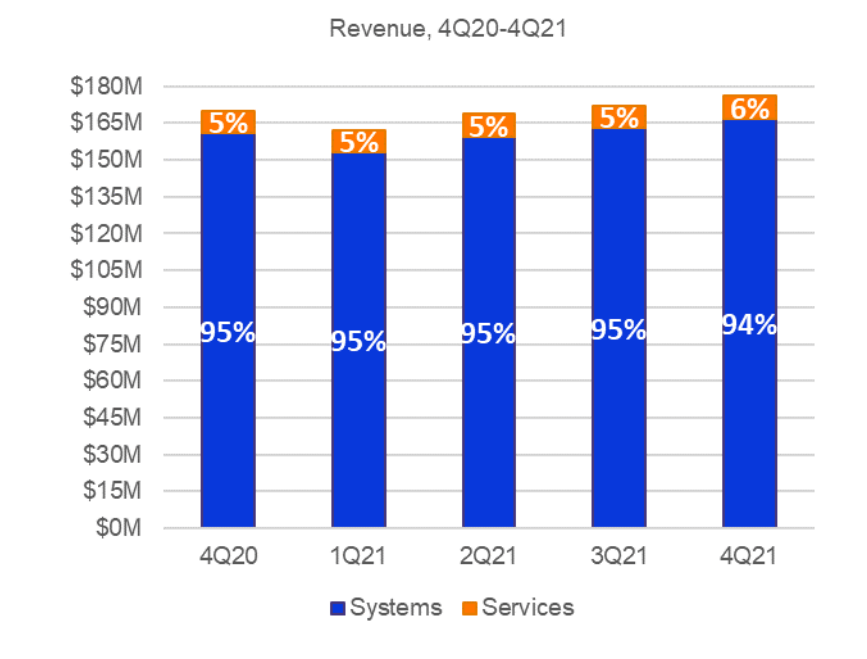 Calix added 26 broadband service provider customers for the quarter – resulting in 131 new customers for the year – and ended 2021 with record cash and investments of $204.3 million, according to financial statements.

In his letter to stockholders, Russo noted that Calix had increased inventory this quarter relative to the prior quarter to account for ongoing supply shortages and shipping delays. But he warned that Calix expects supply chain problems to persist for all of 2022 "and will challenge our ability to grow as fast as we have the past two years."

Furthermore, the company has seen "significant" cost increases in components, shipping and logistics. "This has and will continue to put downward pressure on our gross margins for the foreseeable future," said Russo.

Q4 earnings show that both GAAP and non-GAAP gross margin were negatively impacted by higher component and logistics costs. Operating expenses also increased by 19%, which Calix attributed to increases in headcount, costs associated with its in-person and virtual ConneXions conference and "a higher level of investments in research and development programs and continued investments in our IT systems."

Looking ahead, Calix execs issued revenue guidance for the first quarter of 2022 of $174 million-$180 million, staying roughly even quarter-to-quarter and increasing approximately 9% from Q1 2021. "Our current target financial model range remains for revenue growth between 5 to 10% per year on an annual basis," writes Russo.

Russo also warned of the "corrosive" impact that increasing component supplier "decommits" may have on their efforts this year, as suppliers go back on their agreements.

"There's been an increase in decommits ... That means you're going out and having to find the parts on a spot market and you are paying up for 'em, if you can get them," said Russo. "For me, it's really more about what are we going to see in the next 91 days? Because we did our bit, we put the orders in. Now let's see if the component suppliers will actually meet their deliveries."