In August 2013, at a restaurant in Hong Kong, Huawei CFO Meng Wanzhou gave a PowerPoint presentation to HSBC that is now the focus of her Canadian legal team's bid to overturn American charges against her and halt Meng's extradition to the US.

That presentation concerned the Chinese equipment vendor's relationship with Skycom, a mysterious firm that is alleged to have sold American IT equipment to Iran, in breach of US sanctions.

US prosecutors argue Skycom was a front company for Huawei, a means of keeping the Chinese vendor's name out of a business deal.

Strikingly, Huawei does not today deny that it once owned Skycom. Until Meng's arrest at Vancouver Airport in December 2018, it was describing the firm as a local business partner in Iran. But in recent court filings, it acknowledges that it previously controlled the company. 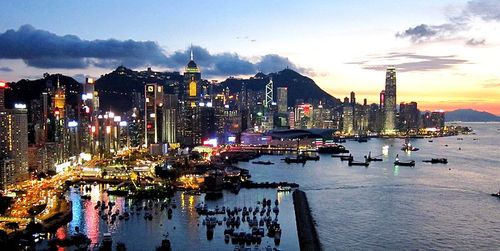 The Meng Wanzhou trial is moving to Hong Kong.

Whether this means Huawei breached US trade sanctions against Iran is unproven. That would depend on the details of transactions in Iran, including the dates they happened.

In the case of Meng, the specific charge it is now fighting is that she misled HSBC in the Hong Kong restaurant over the nature of Huawei's relationship with Skycom.

"We submitted to the court a number of emails between Huawei officials on the finance side as well as HSBC officials who manage the Huawei customer relationship  essentially showing that at very senior levels within HSBC they were aware at all times both prior to Meng's presentation and afterwards that Huawei controlled the Skycom bank accounts, and we would say the deliberate omission from the US record of this exculpatory information from the US record of the case is an extreme show of bad faith toward the courts in Canada," said Alykhan Velshi, Huawei's vice president of corporate communications in Canada, on a call with reporters this week.

Huawei is now trying to obtain access to HSBC records that it says would prove Meng is innocent of the charge of fraud.

Because these are "not discoverable" under Canadian law, Meng has, in Velshi's words, been "fighting with one hand tied behind her back."

The legal team's response has been to seek access to those HSBC records in other jurisdictions. It recently failed to persuade a court in the UK to order the opening of those files. Now, it is turning its attention to Hong Kong, where a "prehearing" is due to begin on March 12.

Why should the outcome be any different? Partly, says Velshi, because the plaintiffs and underlying law statutes are different. It also makes sense to pursue the case in Hong Kong, he says, because that is the scene of the alleged crime and where documents were exchanged.

To many outsiders, the suspicion will be that geopolitics are involved and that Huawei believes it will receive a more favorable decision in China-controlled Hong Kong than it did in the UK.

"It is not something I can offer insight or expertise on," was all Velshi would say when asked about that. "We are hopeful we are able to obtain documents that are currently in Hong Kong and how we do that is ultimately a matter of Hong Kong law."

Meng was detained at Vancouver Airport nearly two-and-a-half years ago and extradition proceedings against her have dragged on longer than anyone could have anticipated. Final decisions in Canada are not expected until much later in 2021 and there will inevitably be an appeals process after that.

If Huawei can pick HSBC's documents safe in Hong Kong, there is no guarantee the records will be conclusive.

Huawei's determination to access those records implies it is confident they will exonerate Meng. What's interesting is that the British Columbia Supreme Court has said there is an "air of reality" to Meng's claims about US misrepresentations and HSBC's knowledge of the Huawei and Skycom relationship.

But to support her case, the records would have to show  as Velshi makes clear  that HSBC knew all about Huawei's relationship with Skycom, including its ownership of the company at one time or another.

If no trade sanctions were ever breached, why would HSBC deny this? An out-of-hours approach, putting this question to Huawei's UK team, had not been answered at the time of publication.

But a year ago, Huawei's lawyers were reportedly arguing that HSBC did a deal with the US Department of Justice. In exchange for its cooperation in the campaign against Huawei, the DoJ would turn a blind eye to HSBC's alleged wrongdoing, said to include the processing of Iran-related transactions though New York offices, according to Nikkei Asia.

Velshi is scathing in his assessment of the former US administration and says Joe Biden has still not repudiated "inappropriate comments" by Donald Trump and his officials that prejudiced Meng's case. "Her arrest was about politics and not justice," he says.

The only certainty about this entire affair is that one of the world's multi-billion-dollar corporations has been far from truthful.