Comcast said it blocked about 6 billion cybersecurity threats  or roughly 104 cyber-threats per household per month  between January and August 2020.

Those totals come months after Comcast began to offer its xFi Advanced Security product as a free add-on to millions of customers using eligible gateways back in January. Comcast originally introduced xFi Advanced Security as a premium-level, standalone service for an additional $5.99 per month. 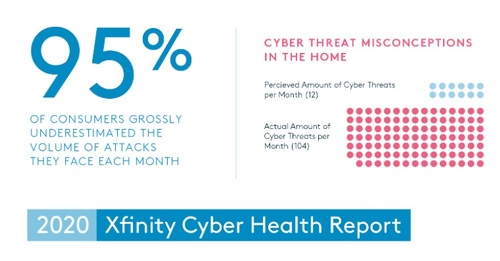 That product, which is powered in part by Cujo AI's cloud-based platform, uses machine learning and AI techniques to spot malware intrusions and potentially hacked IoT devices. Once threats are located, the system automatically blocks and contains suspicious activity and alerts customers about how to resolve those threats.

Comcast currently provides xFi Advanced Security to high-speed Internet customers who use qualified, cable operator-supplied gateways, including the XB7, a new DOCSIS 3.1 gateway that supports Wi-Fi 6. Comcast estimates that about 20 million of its customers currently qualify for the service (the cable op ended Q3 2020 with 27.83 million residential broadband customers). The cybersecurity service represents another example of how cable operators and other ISPs are using managed home networking services and features to boost the value of broadband beyond raw speeds and feeds.

Comcast's cybersecurity tally was woven into a broader study  the 2020 Xfinity Cyber Health Report  released over the weekend that combined data from millions of connected xFi homes with a survey of 1,000 adults about their cybersecurity habits and perceptions.

According to the Comcast-commissioned survey conducted by Wakefield Research in September, some 95% of respondents did not realize the extent to which their connected homes are under attack. While 65% said they have heard of the threat of malware, just 35% said they could confidently explain that threat. Similarly, 53% had heard of phishing, but just 28% said they could explain it. The numbers are even worse for distributed denial-of-service (DDoS) attacks, with only 18% saying they've heard of them and just 10% saying they could confidently explain the threat.

Meanwhile, a large majority of respondents – 85% – believe they were taking all the necessary security precautions to protect their home networks. Yet a majority (64%) admitted to behaviors  such as reusing passwords  that open themselves up to attack.

Comcast is highlighting these issues as consumers increasingly become more dependent on broadband during the pandemic and as they continue to connect more devices to their home network. Comcast estimates that customers on xFi  its cloud-based home network management platform  have an average of 12 Internet-connected devices per household and added an average of two devices over the past year. Meanwhile, customers identified as high-end users have as many as 33 devices and added five since last year. The survey also showed that 61% of respondents plan to buy at least one connected device during this holiday shopping season.