Orange Business Services gained the top spot in Vertical Systems Group's Mid-2021 Global Provider Carrier Managed SD-WAN Leaderboard, followed by AT&T, Verizon and NTT. VSG ranks SD-WAN providers based on site share outside of their home country as of June 30, 2021; Orange operates out of France, and AT&T and Verizon are based in the US.

This is the first Global SD-WAN Leaderboard that VSG has published, and Rosemary Cochran, principal and co-founder of Vertical Systems Group, notes that AT&T and Verizon are also on VSG's US SD-WAN Leaderboard, which has been published for a number of years. 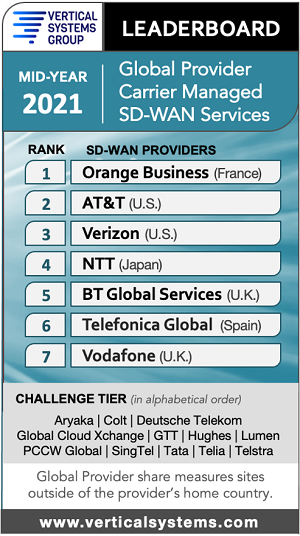 Click here for a larger version of this image. Source: Vertical Systems Group.

Overall, the global SD-WAN market grew 39% in H1 2021, compared to the first half of 2020 according to a recent Dell'Oro Group report.

Despite that growth, VSG's Cochran says the SD-WAN market is still relatively small. "The migration path to SD-WAN has been really from MPLS and dedicated IP VPN networks. That market worldwide is still significantly bigger than SD-WAN right now," says Cochran. Existing network infrastructure and regulatory requirements have presented challenges to expanding SD-WAN in some regions, she adds.

Coming in fifth, sixth and seventh place on VSG's Leaderboard are BT Global Services (UK), Telefonica Global (Spain) and Vodafone (UK). Each of these service providers holds a 5% or higher share of billable retail sites outside of their respective home countries.

Service providers are continuing to adapt to new enterprise requirements around the remote workforce surge in 2020, says Cochran. In addition, "we're seeing a big consolidation of the SD-WAN suppliers  there are still some doing more DIY networks, but for ones that are global providers on the Leaderboard that service providers are using as managed services, there's a much smaller number." Networking giants are also willing to pay a premium to scoop up SD-WAN suppliers  Juniper Networks shelled out $450 million last year in its acquisition of 128 Technology.

VSG analyzes SD-WAN deployments in five regional markets including North America, Latin America, Europe, Africa/Middle East and Asia/Pacific, and found that the seven operators in the Leaderboard have good to strong SD-WAN coverage in at least three of these regions. In addition, VSG says the majority of multinational managed SD-WAN customers are utilizing hybrid network configurations with MPLS, IP VPN, cloud connectivity or other services, as well as integrated security features from third-party vendors.

Cisco, Fortinet, HPE Aruba, Nuage Networks from Nokia, Versa and VMware are the primary vendors supplying SD-WAN technology to the managed service providers on the Leaderboard. Many of these vendors were also highlighted in Dell'Oro's recent report.

The top five global SD-WAN vendors were Cisco, Fortinet, VMware, Versa and HPE Aruba, says Dell'Oro; in all, the top six vendors carved out over 70% of SD-WAN market share for H1 2021. Many vendors are also adding security features to differentiate themselves in the competitive market, explains Dell'Oro.