Enterprises Moving to Managed SD-WAN
Respondents revealed what they want most out of a successful SD-WAN deployment, which includes cloud and WAN optimization, NFV (35%), support for remote workers (33%), SD-WAN as a managed service and security features. The survey also outlined a rising trend in enterprises' interest in SD-WAN as a fully managed service  37% expressed interest this year versus 28% in 2019  instead of a DIY deployment. Also, 87% of respondents would consider a managed SD-WAN as compared to 59% in 2019, which is likely due to enterprises' desire for reduced network complexity and better application performance.

A recent report by Omdia echoes enterprises' growing interest in deploying SD-WAN as managed service. According to Omdia, "Market growth is being driven by service providers that are acting as sales channels for SD-WAN vendors' over-the-top solutions by offering SD-WAN technology as a managed service bundled with other services."

As enterprises have hit some roadblocks in attempting to deploy SD-WAN on their own, they're increasingly looking to a managed service provider to assist with deploying an SD-WAN with "more complete end-to-end WAN optimization, bringing in regional multi-cloud connectivity that includes connections into SaaS applications, and includes security  which was a major theme in the survey last year and this year," says Aryaka's Ginsburg. 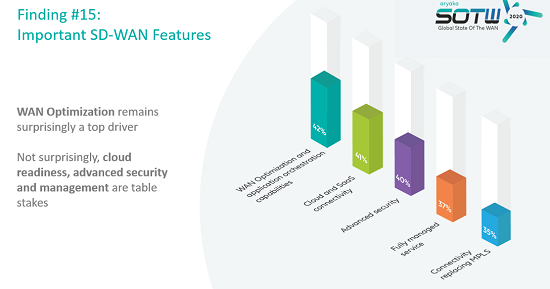 "The number of organizations considering a managed service went up significantly, which is probably reflective of a growing awareness and acceptance in North America of a managed model, which was always strong in the rest of the world," says Ginsburg. "This is really good from the standpoint of those offering a managed SD-WAN service."