Application performance and network complexity are top of mind for organizations deploying SD-WANs, according to a report by SD-WAN supplier Aryaka.

"Modern applications are being distributed across on premises data centers, multiple public clouds (IaaS & SaaS) and edge locations. This is creating more complexity and greater dependency on the network to ensure optimal application performance as confirmed by the Aryaka report," said Bob Laliberte, sr. analyst and practice director at ESG, in a statement. "Organizations need WAN solutions that deliver performance, flexibility and simplicity to overcome that complexity. This is driving interest in managed SD-WAN offerings that combine application optimization and secure connectivity, to any location, from any location, including access and support for remote workers."

In its fourth-annual global State of the WAN report, Aryaka surveyed over 1,000 global IT and network practitioners in January about their networking strategies and performance challenges. Respondents represented nine countries at companies in over 15 verticals, headquartered in NA, APAC and EMEA.

Aryaka's David Ginsburg says the observations gathered from the survey are especially relevant considering the current COVID-19 pandemic. "The survey was conducted in January, about 45 days before the pandemic, but we're finding that most of the observations are even more applicable in the current environment especially as it relates to being able to manage [the WAN] in a lights-out operation or handling remote workers, and utilizing collaboration applications  that's top of mind right now." 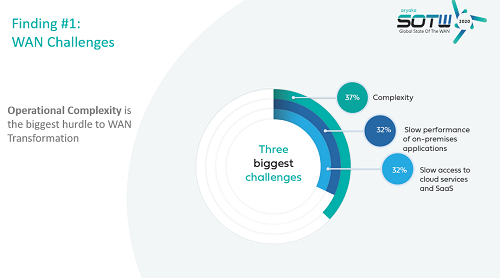 One reason IT managers could be struggling with network complexity is due to the increase in the number of multi-cloud cloud applications they're managing. The number of enterprises utilizing over 10 SaaS applications nearly doubled in this year's survey (51%) versus in 2019 (23%). Respondents reported using AWS, Azure, Google, IBM, Oracle and Alibaba Cloud for their SaaS applications, and companies deploying over 100 applications rose from 43% in 2019 compared to 59% in 2020.

Rate of SD-WAN adoption
Aryaka's survey also examined progress in SD-WAN adoption and found that many respondents are still in the information gathering stage (44%) of deploying SD-WANs. About 23% are in the vendor evaluation stage; 11% building a business case; 13% in deployment; 6% deployed and satisfied with results; and the remaining 2% have deployed but are unhappy with their SD-WAN service.

"The maturity of the SD-WAN market is no longer in question," explained Cliff Grossner PhD, senior research director, cloud and data center research practice, at Omdia in a statement last week. "Although there is still a lot of education to do in some markets, the business has reached a stage when SD-WAN vendors are focusing on explaining to customers why a particular offering is best and how it aligns with strategic corporate directions. The net effect of this is that sales cycles are becoming shorter."

For enterprises in the evaluation stage of deploying an SD-WAN, top barriers to deployment included concerns over application performance, knowledge gaps and complexity of deployment. Aryaka's report noted that cost is less of a consideration for enterprises considering SD-WAN deployments than in previous years  likely because SD-WAN ROI is better understood as the market has matured.

This was the first year Aryaka asked a question about 5G in the survey  42% said they are looking to invest in 5G. The survey also revealed that 5G is of interest as a potential primary source of connectivity for SD-WAN.