A production crisis centered on the Starship engine has SpaceX facing the "genuine risk of bankruptcy," Elon Musk said in a companywide email delivered the day after Thanksgiving, according to multiple media reports.

The issue reportedly stems from troubled development of "Raptor" engines that will be used to power SpaceX's new Starship rocket.

"The Raptor production crisis is much worse than it seemed a few weeks ago," Musk wrote, according to CNBC, citing a copy of the message to employees. SpaceX, Musk explained, faces "genuine risk of bankruptcy if we cannot achieve a Starship flight rate of at least once every two weeks next year."

Space Explored, the first to report on Musk's message, hesitated to take the "mention of bankruptcy at face value," holding that it's likely more about Musk sharing the pressure of hitting the aggressive timelines necessary to keep the program moving ahead without scaling back operations. 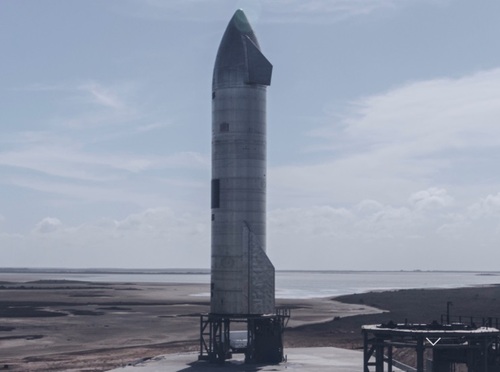 If it eventually proves to be a reliable launch vehicle, the high-capacity Starship rocket could enable SpaceX to accelerate its deployment of Starlink satellites and play a critical role in future moon and Mars missions.
(Image source: SpaceX)

Starship is SpaceX's next-gen launch vehicle, slated to be used for future mission to the moon and Mars, and for the delivery of massive numbers of Starlink satellites into low-Earth orbit (LEO). The heavy-duty Starship rocket has been linked to a "Gen2" plan for Starlink that will involve more advanced LEO satellites for SpaceX's LEO-based broadband service. Delivery of Starlink satellites has thus far relied on SpaceX's Falcon 9 rockets.

According to CNBC, SpaceX has flown multiple short-range test flights of Starship prototypes, but will need as many as 39 Raptor engines each to shift to orbital launches. The current hope is that the first orbital Starship flight will take place in January or February 2022.

The report also notes that Musk's message followed the recent departure of former VP of Propulsion Will Heltsley, who was removed from Raptor development prior to his departure.

Musk reportedly told employees he would get involved personally to help get the Raptor production situation back on track. "We need all hands on deck to recover from what is, quite frankly, a disaster," he wrote.

Typically active on Twitter, Musk, at last check, has yet to use that platform to react to or discuss the message sent to SpaceX employees late last week.