Dangerously influential character, Vladimir Putin. Walk into any European bar, café or restaurant today, and the chitchat is usually about all the positive qualities of the Russian dictator and how we could use more leaders like him. Realizing that people cannot be trusted to think for themselves and sift outright propaganda from probable truth, Europe acted fast, banning Russia Today (RT) and Sputnik, two broadcasters under Putin's control, on March 2. The UK's freedom-loving, libertarian government swung into lockstep with its own bans just two weeks later.

Good thing, too, because dictators haven't looked this appealing since 1939, when most Brits hung Nazi flags from their windows and cheered on Hitler's invasion of Poland. Next up must be a ban on UK sales of the Global Times, a Chinese newspaper that reads like a manifesto by the Chinese Communist Party  right up there with Putin in the European popularity stakes. Best cancel any Karl Marx literature, as well. Western democracies are in peril with that in circulation.

Most of that is pure piffle, of course. The bit that isn't, unfortunately, is the view that people need shielding from content by the governments they elected. Sadly, it means that Europe is in no position to lecture Russia on the topic of censorship. It also risks weakening the case against Eutelsat, a European satellite company caught up in this war on free speech. Outside Russia, its satellites no longer transmit RT. But inside Russia, where Eutelsat reaches about 12 million homes, RT remains available alongside other Russian channels. Various Western services  including BBC World, Deutsche Welle, Euronews and France 24  have disappeared from Russian screens. 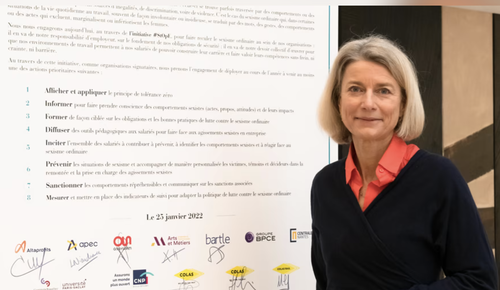 As a company headquartered in Paris, Eutelsat's reputation is on the line. Activists are appalled that it has become a vital conduit for Putin's propaganda in Russia even as other channels have vanished. Twitter is ablaze with Ukrainian anger. Jim Phillipoff, the founder and former CEO of a Ukrainian satellite TV platform called Xtra TV, thinks that the next round of sanctions should "force companies like Eutelsat to leave" Russia. "This can seriously affect Putin's propaganda in Russia itself!" he tweeted this week.

Eutelsat's executives have not helped themselves by dodging questions. Eva Berneke, the Danish CEO since January, would not speak with Berlingske, her country's oldest newspaper, for an article this week that reported on fierce criticism of Eutelsat. The Denis Diderot Committee, a recently formed campaign group (named after the eighteenth-century French intellectual whose writing was banned in Paris but allowed in Russia), has also been snubbed, according to André Lange, who runs the group alongside Phillipoff.

"We have tried to have contact with various executives in the company (CEO, general secretary, head of international and European affairs, press officer)," he told Light Reading by email. "No answer so far." Light Reading's own approach to Eutelsat also went unanswered. But the Berlingske report, as Lange pointed out, does include a statement issued by Eutelsat's press office in which it claims to follow "a strict policy of neutrality" that means sticking to local regulations.

The fog of propaganda wars

In the absence of Eutelsat feedback, the developments in Russia are difficult to unpack. But the European and US channels appear to have been taken off the air not by Eutelsat but by NTV Plus and Tricolor, two Russian TV platforms that use capacity on Eutelsat's satellites. NTV Plus is owned by Gazprom Media Holdings, a subsidiary of the state-controlled energy giant Gazprom. Tricolor is independent but looks sympathetic to the Kremlin. On their websites, NTV Plus and Tricolor blame the disappearance of non-Russian channels on decisions by the broadcasters. The Denis Diderot Committee, in a working paper published earlier this month, says that is "obviously untrue."

Whatever the circumstances, exiting Russia would carry a higher cost for Eutelsat than it has for other European companies. When they suspended product deliveries to Russian customers, Nordic network equipment makers Ericsson and Nokia revealed that only 2% of their group revenues are generated in Russia. The Denis Diderot Committee, citing a report by Advanced Television, puts the figure for Eutelsat at about 6%. Based on its last fiscal year, when overall revenues slid 3.5%, that would equal about 74 million ($78 million).

In justifying its apparent decision to continue operating in Russia, Eutelsat could argue that it has not played an active role in the removal of channels. It might also point out that Europe has behaved no differently from Russia by censoring RT and Sputnik, a decision criticized by the International Federation of Journalists (IFJ) and the European Federation of Journalists (EFJ). "The European Union, which has contributed to this new wave of repression by banning RT and Sputnik, has a responsibility to assist independent Russian media and journalists," said Anthony Bellanger, the IFJ's general secretary.

While Lange is not entirely unsympathetic to the arguments about maintaining neutrality, his group believes censorship by Russia is "not symmetric" to Europe's moves against RT and Sputnik. Those companies "were promoting the legitimacy of the 'military operation' in Russia," it argued in its white paper. By contrast, the services affected by Russian censorship "were just reporting and analyzing the events, without obeying government instructions." In his email to Light Reading, Lange goes as far as saying that some of the Russian content still available through Eutelsat could even be deemed a "call to genocide."

Next round of sanctions

But despite Phillipoff's recent tweet, Lange is not pushing for Eutelsat's complete withdrawal from Russia. "We think that Eutelsat should continue to deliver Internet services to avoid closure of the Russian net," he said. Instead, the Denis Diderot Committee prefers sanctions that would stop NTV Plus and Tricolor from using Eutelsat's satellites. These could be legally justified, it reckons, on the grounds that Russia has restricted the "free flow of information," infringing on the rules established by the Eutelsat intergovernmental organization, whose signatories include the countries where Eutelsat operates. Russia is among them.

Eutelsat could then reallocate capacity to international news channels as well as Russian-language channels that already exist in Europe and Ukraine. "Free-to-air DTH [direct to home] does not need authorization by the Russian authorities and would respect the principle of free flow of information accepted by Russia in various international treaties," said Lange.

All this presumes a lot, including that Russia  a country now accused of committing war crimes in Ukraine  will play by and have respect for international rules. Moreover, the assessment of the Denis Diderot Committee differs from that of the IFJ and EFJ. Their view seems to be that a free press should come without any requirements, however unsavory the content.

These are evidently dark days for free-speech absolutists, both inside and outside of Russia. So upset is Elon Musk about censorship and restrictions on social media platforms that he is offering $44 billion to buy Twitter and make it a paragon of the laissez-faire approach. All of which surely proves that Musk would never block Twitter accounts he does not like. Right?

So much for being "committed" to free speech. pic.twitter.com/iXsMQYq8v0