Italian stallion, a term for a vigorous, musclebound hunk of southern European stock, could well describe French telecom operator Iliad. Since galloping into the Italian mobile market last year, the steed of French billionaire Xavier Niel has bulked up on 2.8 million Italian customers, according to figures published today. Rival telcos Vodafone Italy and Wind Tre have scattered in its path. Even Telecom Italia, the country's incumbent, has had to cede ground.

Back in its domestic market, by contrast, Iliad has been under siege. Some 347,000 customers quit the operator's service last year, leaving it shy of 19.9 million subscribers in December. Once a fearsome challenger to any French operator, Iliad has recently found the going somewhat tougher as the old guard have learnt new tricks.

Not One of the Gilets Jaunes 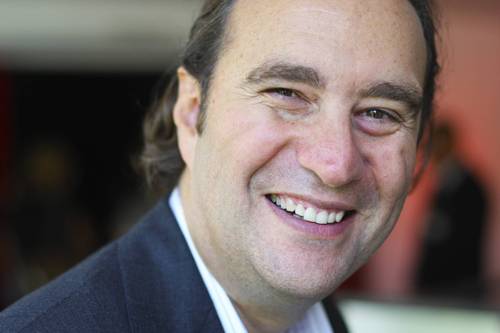 Xavier Niel, the founder of Iliad, is one of the ten richest men in France.

Setbacks in France have forced Iliad to slash its financial objectives. Its target of generating 1 billion ($1.14 billion) in annual cash flow has been delayed by a year, to 2021, with Iliad aiming for 800 million ($908 million) in 2019. A more troubling sign of financial pressure is a review of mobile assets that could eventually result in a sale of about 5,700 mobile sites to an investment fund. Investors reacted by sending Iliad's share price down more than 4% to 87.04 on the Euronext exchange in early hours trading Tuesday.

The results should also alarm regional authorities amid criticism of Europe's approach to the regulation of its telecom markets. Seemingly determined to retain four mobile networks in each national territory, regulators have ensured there is always at least one player that is losing out, say critics. In Italy, that company was last year Wind Tre, formed from a merger between Wind and Three Italia that was supposed to provide strength. The companies invited problems when they agreed to sell assets to Iliad to secure the regulator's approval of their deal.

In blocking takeovers, or attaching unfavorable conditions to mergers, Europe's authorities have forced operators to seek alternative remedies to the problem of hyper-competitive markets. Among them is the growing enthusiasm for network sharing or the sale of infrastructure. Before Iliad's update this week, Telecom Italia and Vodafone announced a network-sharing partnership in Italy to cope with the rollout of new 5G services. Vodafone has even set up a "virtual internal tower company" for all its European operations.

"You will see more of this going forward," said Nick Read, Vodafone's CEO, during a press briefing with reporters at the recent Mobile World Congress. "As part of that we could monetize the networks. The default position will be that we want a majority [stake] but that doesn't preclude looking at other options. An overall arrangement would be with an industrial partner."

Those who champion the European system over approaches taken in the US and China, where a few industry giants serve hundreds of millions of customers, say it has been good for consumers. The price of a mobile data service is much lower in western Europe than in the US, they point out. Others dismiss suggestions Europeans lags other countries in the race to build 5G networks. The US has merely done an excellent job of marketing 4G services under a 5G banner, they argue.

But Europe's preference for crowded mobile markets may seem less consumer-friendly if struggling operators start to slash jobs. Iliad claims to have grown by 350 "net jobs" in 2018, finishing the year with more than 10,000 employees. Others have been quicker to make cuts, though. In Italy, Vodafone last week revealed plans to cut 1,130 jobs, or about 17% of its entire workforce, because of "extraordinary competitive pressure." In Spain, it aims to cut 1,200 jobs, nearly a quarter of the total, due to the same market forces. In the six months to September, Spanish earnings fell 28%, to 542 million ($615 million), compared with the year-earlier period.

Despite its customer losses, Iliad seems to be faring better than that. Excluding device sales, group revenues last year rose 1.6%, to about 4.7 billion ($5.3 billion), and consolidated earnings slipped just 1.2%, to roughly 1.8 billion ($2 billion). Start-up costs in Italy weighed heavily on the bottom line, with overall profit falling 18.5%, to 330 million ($375 million). But those investments have fueled customer growth. 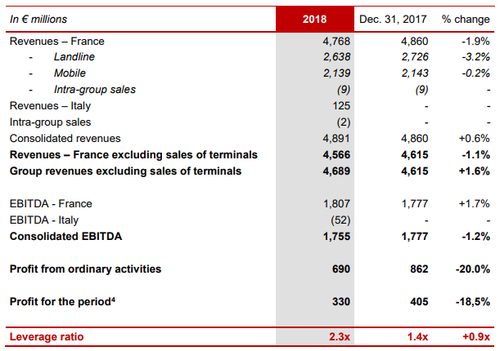 Investors are understandably worried, though. Iliad's leverage ratio -- a measure of its indebtedness that calculates net debt as a multiple of earnings -- soared from 1.4 in 2017 to about 2.3 last year, and is up from as little as 0.9 in 2016. Heavy spending on sales and marketing activities, and investment in higher-speed fixed and mobile networks, have had an impact on the bottom line and the balance sheet.

Iliad is sanguine, saying it reached a "low point" in France in the recent fourth quarter and that promotional efforts will drive revenue growth this year. Given its track record of innovation, and the ever-shifting circumstances in European markets, a French revival would not come as a major surprise. But it would put another operator in a losing position and prompt further talk of network sharing and workforce cuts. Without an unlikely change in Europe's regulatory mindset, that is a pattern all the region's operators will have to accept.