Ignoring misdemeanors in Iraq, the turnaround of Ericsson's networks business in the last few years has been hard to fault.

When Börje Ekholm took charge of the Swedish equipment maker in 2017, profitability had fallen off a cliff and China's Huawei had overrun much of its former territory. After selling non-core assets and doubling down on research and development (R&D), Ericsson bounced from a loss of 35.1 billion Swedish kronor ($3.5 billion) that year to a profit of SEK23 billion ($2.3 billion) in 2021. However, the broad makeover has concealed a few ugly parts.

This week's restructure seems to partly be Ericsson's attempt at sorting them out. It combines the perennially loss-making digital services unit with the shrinking managed services business. For a long time, investors have been able to overlook their underperformance, like soccer fans untroubled by one or two weak players on a winning team. But they are being more closely scrutinized as business challenges mount.

Of the two, digital services is the bigger problem. Since Ekholm took over, it has racked up operating losses of SEK52.8 billion ($5.3 billion) and watched annual sales drop by nearly SEK5 billion ($500 million). Sales of older products have collapsed while a newer 5G lineup is still not in widespread commercial use. Efficiency measures and further automation might be needed to slash costs, said executives when Ericsson reported its recent first-quarter results. 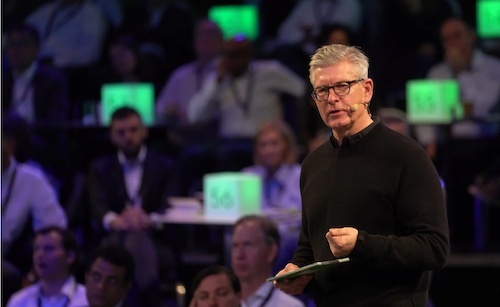 The merger of these two units makes sense, according to Ericsson, because the software and services markets are themselves converging. Pooling investments and expertise would probably support the development and marketing of future products. But jobs seem likely to go as Ericsson eliminates overlap and hunts for savings. This is a familiar activity for Ekholm: Headcount at the business has fallen from more than 116,000 back in 2015 to about 101,000 today.

Ekholm clearly believed a management overhaul was also needed. Peter Laurin, the managed services head, had already revealed he was leaving the company. Jan Karlsson, his counterpart at digital services, is to be demoted, losing his place on Ericsson's executive team. The combined unit will instead be run by Per Narvinger, who currently works in a senior product development role at the successful networks unit.

Some onlookers are bemused about the combination of digital and managed services. "Put them together and you get a loss of -4% on sales of $5.6 billion," said Omdia analyst James Crawshaw in a LinkedIn post this week. "Presumably there are some G&A [general and administrative] costs that can be removed but I don't think that is why the DS [digital services] unit was unprofitable since  forever. It is a loss leader to support the networks business? With the merging of divisions we will never know."

But the restructure is not only about those divisions. Ericsson is also setting up a new business area called enterprise wireless solutions that will include Cradlepoint, the US business Ericsson bought for $1.1 billion in 2020, along with its dedicated networks unit. These currently sit within Ericsson's other unit, emerging business, which is the fastest-growing part of Ericsson but made only SEK7.9 billion ($800 million) last year and had an operating loss of SEK3.4 billion ($340 million).

Separating them will give Ericsson's investors a clearer view of its activities in the enterprise market, where Ekholm believes most future growth will lie. Alongside enterprise wireless solutions but a part of the same segment will be another business area housing Vonage, the unified communications provider that Ericsson hopes to acquire for $6.2 billion in the next few weeks. George Mulhern, Cradlepoint's CEO, will run enterprise wireless solutions, leaving Åsa Tamsons to continue as the boss of "segment other." After the shake-up, it will comprise Ericsson's remaining media assets and what the company refers to as "one-offs."

Given Ekholm's lofty expectations, the enterprise segment is bound to attract lots of shareholder attention when it comes into being. That market may be fast-growing, but it is also extremely competitive.

Ericsson faces not only traditional rivals like Nokia but also Big Tech players such as Microsoft, whose own recent takeovers of Affirmed Networks and Metaswitch make it a more obvious challenger than it previously appeared to be. What's more, Ericsson remains wary of competing against its own telco customers for enterprise deals, which could shrink its addressable market.

Many onlookers, including several who spoke with Light Reading at this week's Big 5G Event in Austin, have doubts about the Vonage takeover. The main rationale for that deal was about unleashing developers to write 5G core apps for an entire community of networks thanks to Vonage's APIs (application programming interfaces). Analysts remain unconvinced that the developers who have previously taken advantage of those APIs will be able to pivot to 5G so easily.

The other danger is that US authorities could block the takeover. Ericsson is in trouble over its activities in Iraq, where it has admitted that some former employees may have paid the Islamic State group, a terrorist organization, for the use of roads. At this stage, fines seem likelier than direct interference with the Vonage transaction. But nothing has been ruled out.

Update: The story has been amended since it was first published to point out that Vonage and enterprise wireless solutions will be two separate business units  not a single unit, as previously indicated  under the same enterprise segment.