Five reasons why US wireless growth is speeding up

Pretty much every American has a smartphone, right? So... why are the nation's wireless service providers reporting a significant rise in the number of new customers signing up for their services?

That question is at the heart of a new report from the financial analysts at Morgan Stanley. Indeed, they found that the US wireless industry collected a total of more than 7 million new postpaid phone customers during the past 12 months.

The analysts published a chart highlighting the situation: 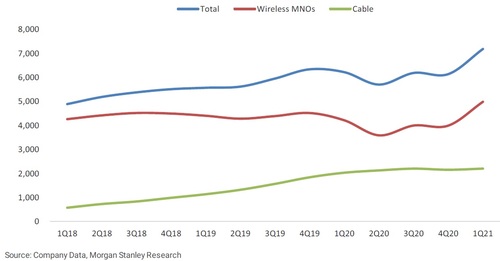 Wireless service providers  including network operators like AT&T and cable MVNOs like Comcast  are raking in new customers at rates that are growing, not shrinking. Click here for a larger version of this image.
(Source: Morgan Stanley)

"This result defies predictions that we were reaching saturation and that cable's entry into the wireless market would significantly pressure the Big 3 [T-Mobile, Verizon and AT&T]," they noted in their report. The analysts outlined a handful of factors they said are contributing to the surprising growth:

1. Kids are getting phones. The analysts noted there are currently 230 million wireless postpaid phone customers in the US. That's roughly 70% of the 330 million people who live in the country, a figure that's growing by around 2 million a year. The analysts speculated that part of the growth among postpaid phone customers is due to the move by parents to buy phones for their kids at increasingly younger ages. While phone ownership among tweens and children used to be rare, that's apparently changing.

3. People are buying more than one line of service. The Morgan Stanley analysts estimated that around 6% of smartphone customers own one phone for personal uses and another phone for work. And they speculated that a pandemic driving workers outside of their offices is helping to increase that figure.

4. COVID-19 stimulus checks, and boredom, are driving phone sales. A number of wireless executives said they saw a spike in phone sales this year after the US government began doling out hundreds of dollars in stimulus cash to every American. And the Morgan Stanley analysts speculated that those new customers may have been attracted to wireless service plans offering access to streaming video services such as Netflix (T-Mobile), HBO Max (AT&T) and Disney+ (Verizon). As COVID-19 lockdowns ease, it's unclear whether such streaming services will remain popular, but they certainly made quarantine less boring.

The Morgan Stanley analysts ended their report with another important question: Will the growth continue?

"In the near-term it does appear that momentum heading into 2Q21 is solid," they wrote. However, "over the medium-term, we would expect some mean reversion with consensus expectations of around 6 million [customer] adds per year over the next couple of years. There is a scenario where growth will slow more than that, which could lead to more aggressive competition in the months and years to come."

But not to worry, they wrote: "While this analysis is focused on smartphones, carriers are hoping that 5G will bring significant growth in connected devices, wearable [devices], IoT, ect., which can supplement the mature smartphone market."

AT&T updated its online coverage maps to show where it's offering midband 5G services. The operator hopes to cover around 100 million people with its midband network by the end of this year.

The IoT needs to stop at voting machines

Bloomberg reported in 2020 of 11 states that still allow the use of wireless-enabled voting equipment. But Politico reported this month that the figure is down to six states. However, that's still too many.