Why the US prepaid market is collapsing 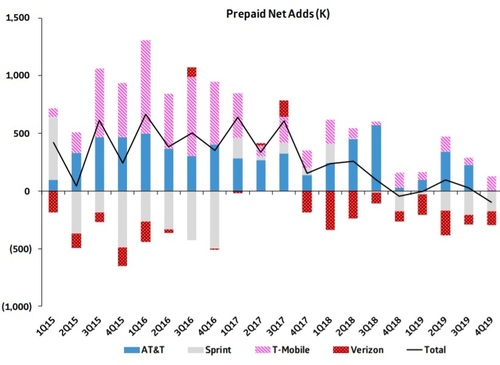 The US prepaid market has been shrinking at a record-setting rate.
(Source: Cowen)

Executives at some of the nation's top operators attribute the situation to a variety of factors, including improvements in the US economy and the lack of light between prepaid and postpaid plans.

"I think as the economy has improved the differences between the two products have gotten a little less as smartphones have worked their way into the prepaid base. Because of the cycle of maybe previous generation phones being available, we see customers now starting to opt into a postpaid construct," explained AT&T's John Stankey during his operator's quarterly conference call with analysts, according to a Seeking Alpha transcript of the event.

T-Mobile executives noted that the company's prepaid customers have increasingly been opting for the operator's postpaid plans.

"I think that postpaid has been growing at the expense of prepaid and that's probably great for the industry overall. So these things aren't really two different things. They are just two parts of one industry that has very positive trends that are fueled as much as anything else by the strong economic conditions that we're seeing. More people are qualifying for postpaid and therefore you're seeing postpaid grow at the expense of prepaid," explained T-Mobile's John Legere during his company's quarterly conference call with analysts, according to a transcript of the event by Seeking Alpha.

Legere also attributed some of the dynamic to the rise of cable operators in the mobile industry, noting customers who typically would have signed up for a prepaid plan are instead signing on to the mobile plans by Altice, Comcast and Charter Communications.

Legere's comments about prepaid are particularly notable considering T-Mobile recently laid off a number of employees within its Metro by T-Mobile prepaid business, as Light Reading previously reported.

Analyst Bill Ho with 556 Ventures said that part of the reason the prepaid industry has been shrinking is because the FCC has been working to modify its Lifeline program. That program is designed to provide government-subsidized wireless services to low income Americans, and operators ranging from Sprint to America Movil's TracFone sell Lifeline services. However, the FCC has reported widespread fraud in the program, and as a result companies like Sprint and TracFone have reduced the number of their Lifeline customers.

"That is a huge part," Ho said of the Lifeline changes in regards to a slowdown in prepaid.

Further, Ho explained, carriers have increasingly been working to acquire more postpaid customers because they typically spend more money than prepaid customers, and they don't change their plans very often. Thus, postpaid customers generally provide higher average revenues per user (ARPU) and lower churn (which is the percent of customers who leave a carrier).

So will the postpaid side of the wireless industry continue to grow? After all, according to Cowen, the nation's biggest wireless providers added 2.5 million postpaid phone customers in the fourth quarter of 2019, an 18% increase over the same period a year prior.

Some speculated that changes in the American economy could affect the growth of postpaid.

"Does that reverse itself, if we see some economic headwinds and maybe people become a little bit more careful about what they do? That's possible," warned AT&T's Stankey.